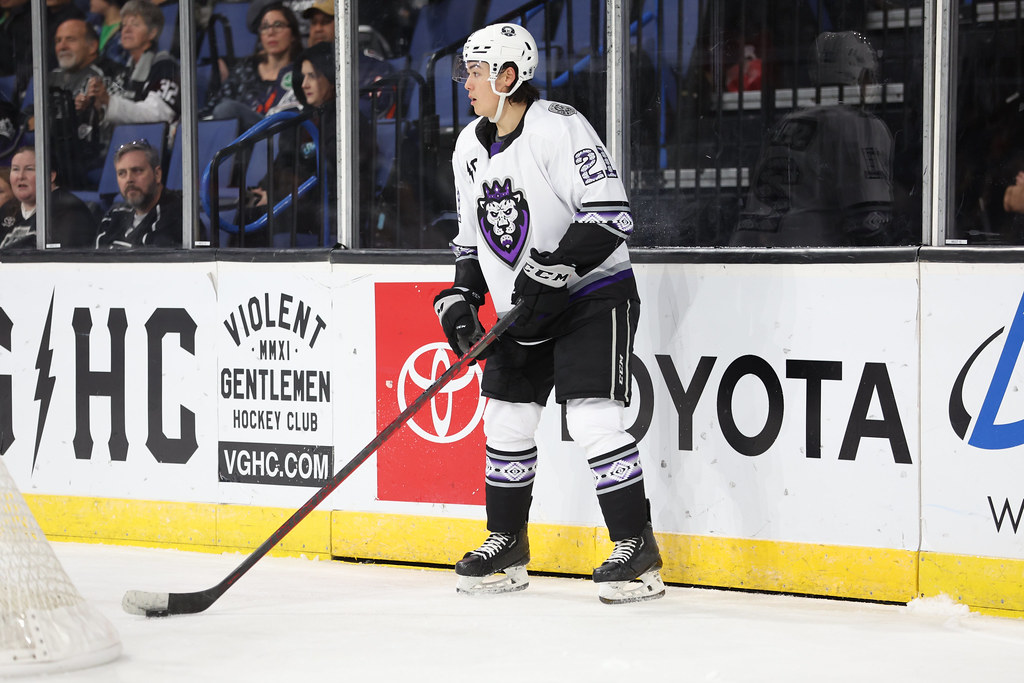 The Ontario Reign has plenty of talent on the back end for the 2022-2023 season, and most of those prospects play on the right side.

Looking at the Ontario Reign opening night roster, that is four defensemen drafted within the last four years by the LA Kings. Throw in Brandt Clarke, and you can make it five. Some of those players are good enough to perhaps be on the Kings right now, while some still need time to develop. We will discuss how each of those defensemen prospects has fared so far in the first 14 games.

Tobias Bjornfot played in 106 NHL games prior to this season. This year he found himself starting in Ontario, which surprised some people. After watching Bjornfot last year, it was clear he needed more seasoning, and sending him down to Ontario might need to happen. Bjornfot has played in all 14 games for the Reign and even recorded a highlight reel goal on opening night against the Abbotsford Canucks.

While the offensive production hasn’t shown, I like what I have seen from Bjornfot in the defensive zone. He has taken only one penalty(!) so far and leads the Reign in ice time on the penalty kill with an average of 2:25 per game. Bjornfot has earned Sturm’s trust so far and it looks to be paying off. Even in his post-games, he has spoken highly of his play a few times. If the Kings don’t make a trade for a left-handed defenseman, I like to see Bjornfot get a call-up.

Kim Nousiainen played in only eight games for the Reign last year and didn’t suit up for any of their playoff games either. This year, I felt he could play on the third defense pair and rotate in and out of the lineup with Tobie Bisson. Nousiainen has only suited up for five of the 14 games. In those five games, he is currently only averaging 14:33 of ice time which is the lowest average of ice time for all nine defensemen the Reign have used so far.

He’s mostly known for being an offensive-minded defenseman but isn’t afraid to be physical even though he lacks size. I haven’t seen much from Nousiainen as he only has one assist in those five games. He hasn’t been noticeable to me.

I was really high on Helge Grans entering the season. While fellow defenseman Jordan Spence played out of his mind last season, Grans quietly had 24 points in 56 games. He was a handful of players I picked to watch for this season as he hoped to build on his quiet 2021-2022 campaign. On opening night he recorded a goal and an assist and looked to be heading in the direction of improvement. Ten games after that and he has only recorded one point since and has been a healthy scratch for three games, with the most recent one being last Sunday against the Silver Knights.

Love this for us! pic.twitter.com/Y0UPvOUxAZ

I’ve been somewhat disappointed with Grans’ offense through the first month of the season. I don’t expect him to put up numbers like Jordan Spence (we’ll get to him later), but three points in 11 games are disappointing. Defensively, I have seen some improvements from Grans. He uses his stick very well and has good instincts. Last year he took only four(!) minor penalties all season, so far he has only taken one minor penalty this year. I was high on the 20-year-old coming into the season (I still am) and I believe he has the potential to be a good all-around defense.

Brandt Clarke has only two games (11/23 and 11/26) remaining on his conditioning assignment, then it’ll be decision time again. Clarke has suited up for the Reign’s last three games and has played over 20 minutes in all of them. Head coach Marco Sturm has placed him on the second defense pair and the second power-play unit. His skating and puck handles have been on display in all three games and recorded two points in the Reign’s 3-2 victory over Henderson last Sunday.

Through three games, Clarke has one goal and one assist. Clarke has generated a lot of hype and you can see why as he can be a dynamic offensive player. Reign fans will only see him for a couple of more games, so enjoy it while it lasts.

I had to save the best for last, right? Jordan Spence has continued where he left off last season with the Reign. While Spence doesn’t have any goals for the year, he has 13 assists in 14 games. His 13 points lead all Reign defensemen as the next closest defenseman only has three points.

It wasn’t surprising to see Spence get sent back to Ontario before the season as Drew Doughty and Sean Walker returned from injury. It’s also not even surprising to see him perform well offensively. Once again, Spence is on the first power-play unit and the first defense pair with Bjornfot. The pairing of Spence and Bjornfot is the only defensive pair Marco Sturm has kept intact all season. Spence currently leads the Reign with 24:28 of ice time per game, eight primary assists, and eight power-play assists. Defensively, he has shown improvements as he threw a couple of hits in the Reign’s last game on Sunday. If the Kings didn’t have too many right-handed defensemen, I think he would have been with the Kings already.

* All stats are courtesy of InStat