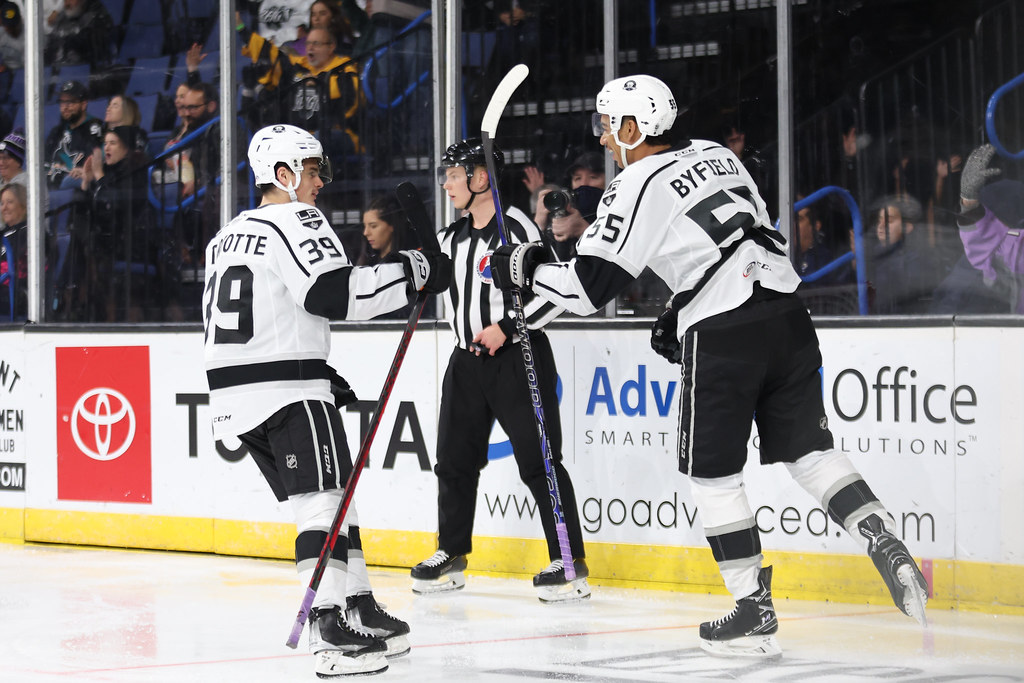 The Ontario Reign put together their best 60-minute performance of the season in a 5-1 win against the San Jose Barracuda Wednesday night.

Here are the three takeaways from Wednesday’s 5-1 victory:

The “start on time” saying was used a lot by Ontario Reign assistant coach Chris Hajt last year. That saying was referring to the importance of getting off to good starts. In the last couple of weeks, the Reign didn’t get off to good starts and ultimately fell behind and would be playing catch up. These last two games were a different story, particularly Wednesday night. From the opening faceoff, the Reign took it to the Barracuda. Ontario outshot San Jose 16-5 in the opening frame and found the back of the net three times.

Samuel Fagemo opened the scoring on the power play 7:39 into the contest, with Tobias Bjornfot and Tobie Bisson both scoring later on two minutes apart. The first period summed up the whole game as the Reign got back to their identity and never looked back. They love playing in their building.

The first line leads the way

Head coach Marco Sturm may have found something in the Turcotte-Byfield-Madden line. That line combined for one goal and five assists for six points. All three players also combined for a +7 rating as well.

"Go to the front of the kids" – Mr. @tp_madden10 Period 2 English Teacher pic.twitter.com/cYa72meDOb

Byfield played with Madden and Gabriel Vilardi last year with the Reign and seemed to develop good chemistry with them. Sturm has decided to pair them back together again along with Turcotte. It looks like it has paid off, as all three have been more noticeable lately. These kinds of games will be needed from all three going forward, especially Byfield and Turcotte. We need to see more of this from them.

In addition to the first line carrying most of the offense, the Reign also got contributions from the blue line. Tobie Bisson got his first goal as a member of the Reign, and Tobias Bjornfot got his first goal since opening night against the Abbotsford Canucks.

Jordan Spence also chipped in with his first goal of the season as well off a good pass from Turcotte.

With his two points tonight, Spence is now tied for the team lead in points with 15. In addition to the defensemen scoring goals, Martin Chromiak got his first AHL point with an assist on Bjornfot’s goal and even got moved up to play alongside Madden and Byfield on the first line. Contributions from up and down the lineup was a theme in last night’s game.

Phoenix Copley also made 21 saves on 22 shots for his 6th win of the year.

UP NEXT: The Reign are back in action Saturday as they take on the Tucson Roadrunners for the first time this year. The puck drops at 6 PM PT.