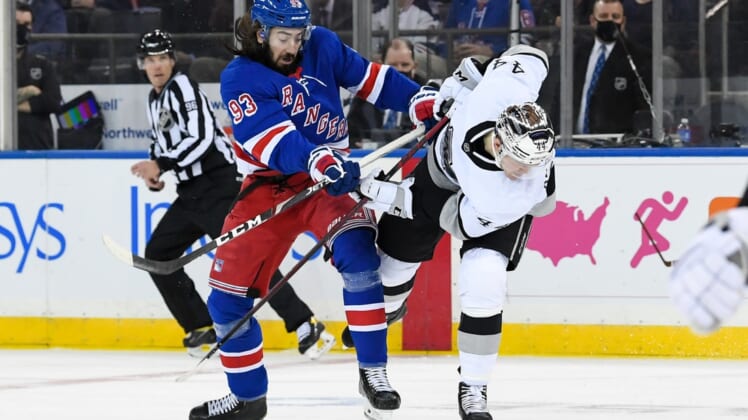 After a 1-2-1 road trip, the LA Kings will be in California for their next six games. Up first is the New York Rangers on Tuesday.

Per the LA Kings Insider, here is how the Kings skated in Monday’s practice:

Here’s how the defense could shake out:

*Did not skate Monday

Interesting to see Kevin Fiala back up with Anze Kopitar and Adrian Kempe. It looks like Todd McLellan may be trying to spark something, particularly with his number-one center, who has struggled of late. Blake Lizotte saw time on the third line in Saturday’s loss to the Kraken, and he is penciled in there again on Tuesday.

Drew Doughty missed practice for personal reasons. At this time, we’ll expect him to play. Sean Durzi did not skate; he missed last game with a lower-body injury.

The Kings won’t play again until Friday, and while neither goaltender has yet to grab hold of the job, I don’t think it’s the worst idea in the world to have Cal Petersen start against the Rangers to give Jonathan Quick a whole week off.

Here’s how the Rangers skated during Monday’s practice:

The Rangers are in the middle of a four-game Western road trip, going 1-0-1 in the first two in an overtime loss to the Kraken and a win in San Jose on Saturday. It’s been a bit of a pedestrian start for a team with high expectations coming into the season. Not unlike LA, it’s been a bit up and down.

This will be the first game of a back-to-back with New York in Anaheim on Wednesday. I’d guess the Kings will see Igor Shesterkin in goal on Tuesday.

It doesn’t get much closer than these two teams in terms of 5-on-5 possession statistics. The Kings are finishing at a slightly higher rate while the Rangers are making more saves, but in puck possession, scoring chances, and expected goals, the two sides fair pretty similarly.

Last year’s Rangers had one of the league’s top power plays. It has been strong again this season, clicking at a 23.5% rate, good for ninth in the NHL. Mika Zibanejad leads New York in power play goals (7) and is tied in points (12) with Artemi Panarin. It’s one of the more dangerous combos in the league with the man advantage.

The Rangers also boast a very strong penalty kill. Their 83.1% rate is good for fifth in the league. They have a pair of short-handed goals so far this season.

For the Kings, well, the power play was starting to look better, but they’re now 0 for their last six in their previous three games. They sit at just 18.8% on the season, good for 24th place. LA is the opposite of the Rangers when it comes to special teams. Where New York is top ten in both, the Kings are bottom ten in both. The LA penalty kill is 26th in the league at 74.3%.

*Note: the odds below are for sports books offered in New York. Refer to available sports books specific to your state.
**Odds as of 10 am ET/7 am PT may have changed since this was published.

Given how evenly matched the two teams are, it’s not surprising to see this reflected in the odds. Currently, the Rangers are ever-so-slight favorites, with multiple books offering -110. BetRivers’ -104 is the best number on the Kings. I think if I can get the Kings at plus money, I’ll take them. Otherwise, I’ll pass.

The total is at six for the game. A few books have the Over at Even money, while BetMGM’s -115 is the best bet on the Under.

With Kevin Fiala back on the top line, I’m going to go with Anze Kopitar (-150) and Adrian Kempe (-135) to find the scoresheet. Fiala is the top shot contributor on the team, so I think we will see his linemates pick up points.

It isn’t just the LA Kings whose top draft picks are struggling to find their footing. Alex Lafreniere and Kappo Kakko each have just seven points in 19 games. The former number one overall pick in Lafreniere is +280 to score, while the 2019 second overall pick, Kakko, is +300 to score on Tuesday.