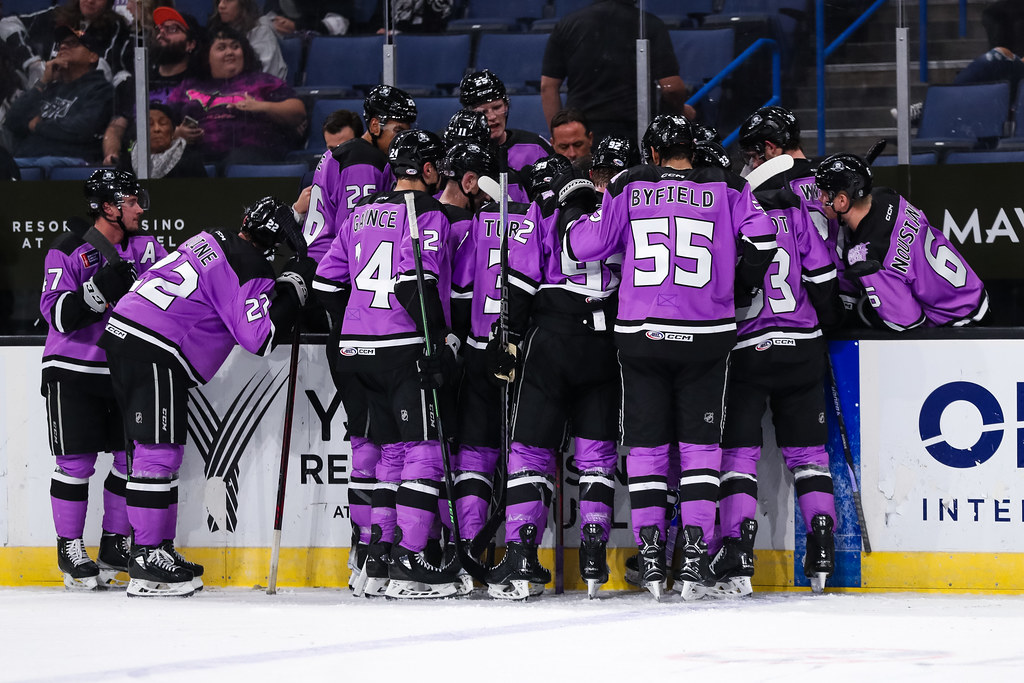 The Ontario Reign got back in the win column as they went 1-1-0 in their two games over the weekend, snapping their five-game losing streak.

Before we get to the three stars of the week, I want to give out an honorable mention star of the week. That honorable mention goes to both the Ontario Reign and Henderson Silver Knights. Every November is Hockey Fights Cancer and before the game, both teams huddled around center ice and had a moment of silence for those who lost their battle with cancer and those who are still fighting. Eight years ago I lost my grandfather to cancer, so it’s great to see everyone stand together.

It’s been a rough year for Tyler Madden so far. Entering last weekend Madden only recorded two goals through his first 11 games. Madden matched his two goals on the year scoring one goal in each game this weekend against the Henderson Silver Knights. In three games against the Silver Knights, Madden has scored three goals. He loves playing against them for some reason. Unfortunately, the Reign don’t play the Silver Knights every game so they’ll need Madden to contribute more offensively as the season progresses. His two-goal performance earned him the third star of the week honors.

The Reign once again got solid goaltending from Matthew Villalta and Phoenix Copley. The duo only allowed two goals each and gave the Reign a chance to win both games over the weekend. Villalta suffered the loss in Saturday’s game while Copley earned his 5th win on Sunday. Both goaltenders have been a good 1A/1B for the Reign all season. During the Reign’s six-game winning streak they were both able to steal a game when the Reign didn’t have their best game. The Reign will need the same from them as the season progresses. Their solid performance over the weekend earned them the second star of the week honors.

Another huge save by Villalta, who closed up the 5-hole to deny Jonas Rondbjerg on a clean break.

Just seconds after the goal, Copley robbed Quinney on a 2-on-1 look to keep the Reign in front by 2.

Brandt Clarke rounded up this week’s three stars of the week for the Reign by recording his first professional goal in Sunday’s 3-2 win. Not only did Clarke register a goal, but he also got the primary assist on Tyler Madden’s goal in the third-period goal. Through three games, Clarke’s skating, puck handling, and offensive instinct have been great to watch. Clarke showed his great offensive instinct as he went down low after Taylor Ward’s shot got stopped and Clarke, being in the right place at the right time, picked up the loose puck and put it into the open net for the goal. Will we see Clarke in the NHL for the rest of the season or back to the OHL once his conditioning assignment ends? That remains to be seen but for now, he has earned the first star of the week honors for his multi-point performance.