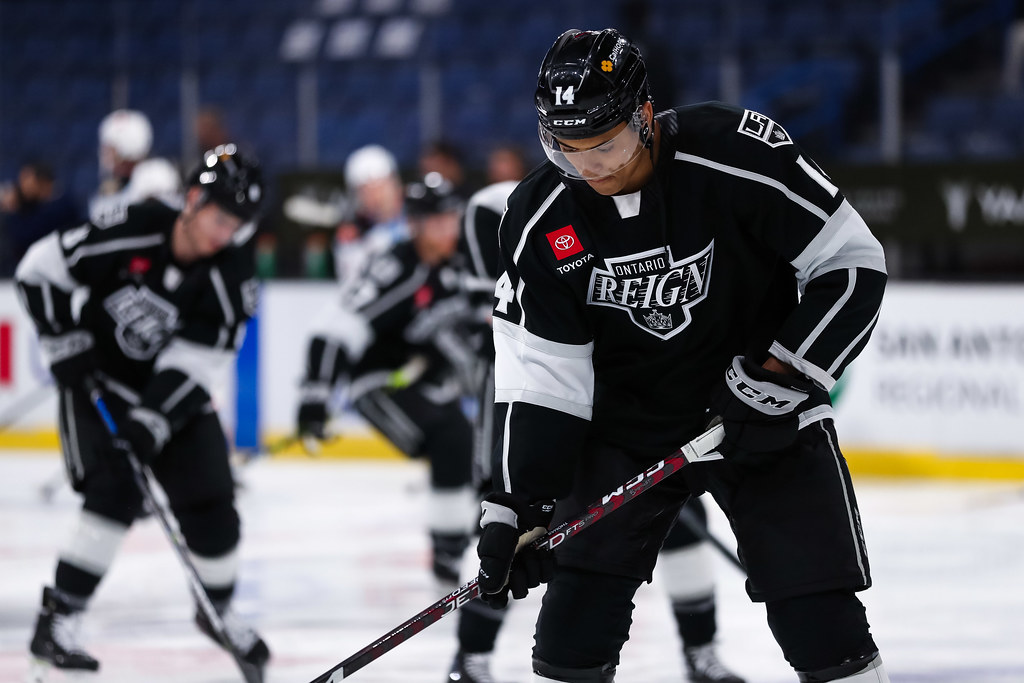 There are both some new faces, and familiar faces as the Ontario Reign start their season Friday, October 14th.

Each year there are players to watch for heading into the season. With a new season upon us, let’s look at five players to keep your eye on for the Ontario Reign this year.

The 2022-2023 season will be Akil Thomas’ third season in Ontario. Last year was a rough one for Thomas. Before the start of the season, he had double shoulder surgery that kept him out until December. He didn’t record his first goal of the 2021-2022 season until late March in a game against the San Diego Gulls.

After that game, Thomas regained his scoring touch scoring seven goals in the last 13 games of the season. For the playoffs, he recorded four goals in four games as well. Now healthy and entering the season, he’ll be a player to keep an eye on this year.

The Kings have plenty of great talent on the right-hand side of the defense in the pipeline. We saw the likes of Sean Durzi and Jordan Spence get some action with the big club last year. Everybody knows what Brandt Clarke can do, but the one guy that gets lost in the shuffle is Helge Grans.

While Grans is young and raw, the potential is there. Amidst Spence’s terrific season, Grans quietly had a good one of his own, posting 24 points in 56 games. At 6-foot-3, Grans has a good reach with his stick and did a great job not taking penalties (he only committed four on the year). Returning for his second season with the Reign, look for Grans to build on that and start getting more recognition.

Taylor Ward will be entering his first full season with the Reign. In 16 games in Ontario last year, he recorded 10 points. While he is not the fastest skater, he has the smarts to get to certain spots on the ice.

Taylor Ward gets his first professional goal to tie it up for the @OntarioReign and send #STKvsONT to overtime. pic.twitter.com/o5AaJmNIOd

He is a player the Reign can move up and down the lineup and on the powerplay. He should have no problem helping a Reign team that loves to put the puck in the net. That sneaky shot of his is one to keep an eye on this year.

Like Ward, Martin Chromiak is entering his first full season with the Ontario Reign. He had a cup of coffee with the Reign in the shortened 2021 season, where he played two games on an amateur tryout (ATO). Last year in the OHL, Chromiak recorded 44 goals and 42 assists for 86 points.

With Martin Frk leaving for St. Louis, Chromiak could find himself on the first powerplay unit. He may not have that hard shot Frk has, but it is lethal in its own right. Chromiak is a player to have an eye on this season with his ability to put the puck in the net. You could see that a lot from him this year.

The 6-foot-6 giant was a late addition to the Ontario Reign from Finland last year. In 12 games played, Samuel Helenius recorded one goal and was a healthy scratch for all five playoff games.

Helenius will be playing as a bottom-six center this season. Mostly known for his defense, he could be a factor in the penalty kill because he is good in the faceoff circle (sounds similar to Jarret Stoll). The penalty kill was an issue for the Reign all last season, and he can provide some help in that area. At 6-foot-6, he won’t be hard to miss on the ice.