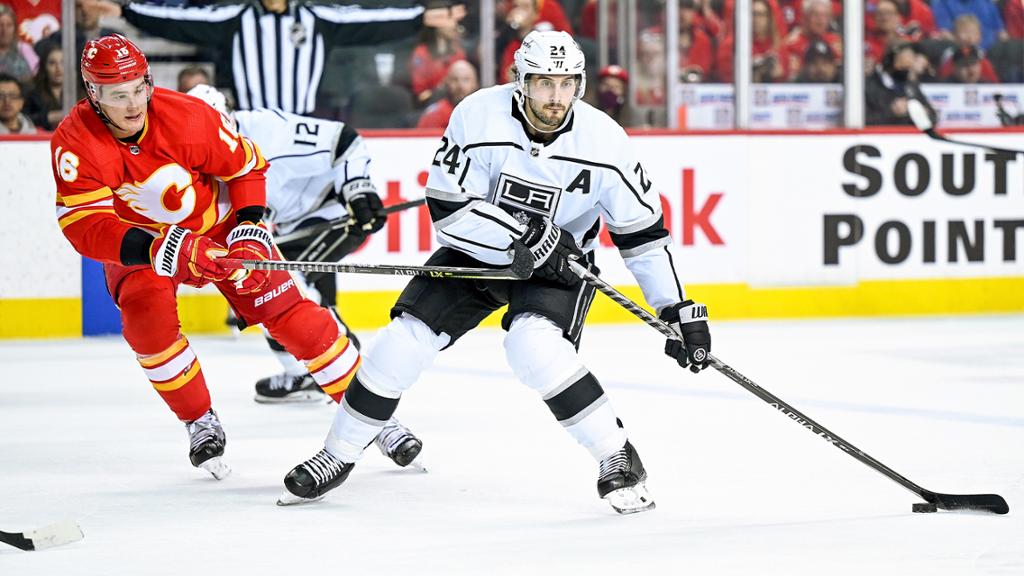 After sweeping their four-game homestand, the LA Kings hit the road against four-straight Pacific Division opponents, with Calgary up first.

After some roster changes on Sunday, here is how I think the LA Kings could line up on Monday:

The Kings made a slew of roster changes on Sunday, partly due to an injury sustained by Brendan Lemieux. Winger Lias Andersson was recalled, but I think it’ll be Jaret Anderson-Dolan that takes the place of Lemiuex alongside Lizotte and Kaliyev on the fourth line.

Hockey Royalty favorite Jacob Moverare was also brought up to Los Angeles, with Brandt Clarke now eligible for a conditioning assignment in the AHL. Though, I’d still expect to see Alexander Edler play his usual role alongside Sean Walker.

Cal Petersen earned the win in goal on Saturday and will be needed on this road trip. That said, I think Jonathan Quick will get the nod on Monday.

Here’s how the Flames practiced on Sunday:

Jonathan Huberdeau had missed the past few games with an injury, but all signs point to him returning to the lineup on Monday. It’s been a slow start for the first-year Flame, but if Huberdeau is going to be matched up with the Kings’ third line, expect plenty of action at both ends of the ice.

There’s no shortage of former Kings in the Calgary lineup, with Tyler Toffoli, Trevor Lewis, and Milan Lucic all spending some time in Los Angeles.

Calgary just ended a seven-game losing streak on Saturday with their win over the Winnipeg Jets.

There’s no question that the start of the season has been a disappointment in Calgary. Tough, their underlying metrics are not too bad. These are two pretty evenly matched teams in terms of their possession numbers.

The Flames’ power play has yet to get off the ground. They are 0 for their last nine and just 18.8% on the season (23rd in the NHL). On the other hand, their penalty kill is among the league’s best. At 82.8, it’s good for seventh in the NHL.

The Kings come into this one as road underdogs, with WynnBet offering +140. Calgary is the favorite, with BetRivers offering the best price at -143. Personally, I think this is a pretty fair line. I was hoping LA would be bigger dogs, but with Calgary’s struggles, it’s not too surprising to see the numbers where they are. I’m probably not going to be involved in this one.

Calgary’s 3-2 win against Winnipeg on Saturday was a good one for Under-6.5 bettors. Against the Kings, the total is currently at six, with FanDuel offering -114 on the Over and WynnBet showing +100 on the Under. I know the Kings have played some better hockey lately, and that includes Jonathan Quick, but I am not at the point where I can trust them at the Under. I won’t be playing the total in this, but if I were, it’d be the Over.

Anze Kopitar is tied for the team lead in assists and is third in points with 13 in 17 games. He is currently on a six-game goalless drought, and I think he could snap that on Monday. He continues to be involved in shot contributions and, with his new position on the power play, could find himself with a dirty one. He is +280 to score in Calgary.

Phillip Danault continues to fly under the radar. He is among the best on the LA Kings in shot assists, and his seven helpers are the third-highest on the team. He is +180 to register an assist on Monday.

It’s former King night in Calgary! It’s only fitting to see the odds for them to find the back of the net on Monday. Tyler Toffoli, Trevor Lewis, and Milan Lucic are +210, +600, +500, respectively, to score a goal.

Jonathan Huberdeau is +200 to score and -115 to record an assist in his return to the lineup.