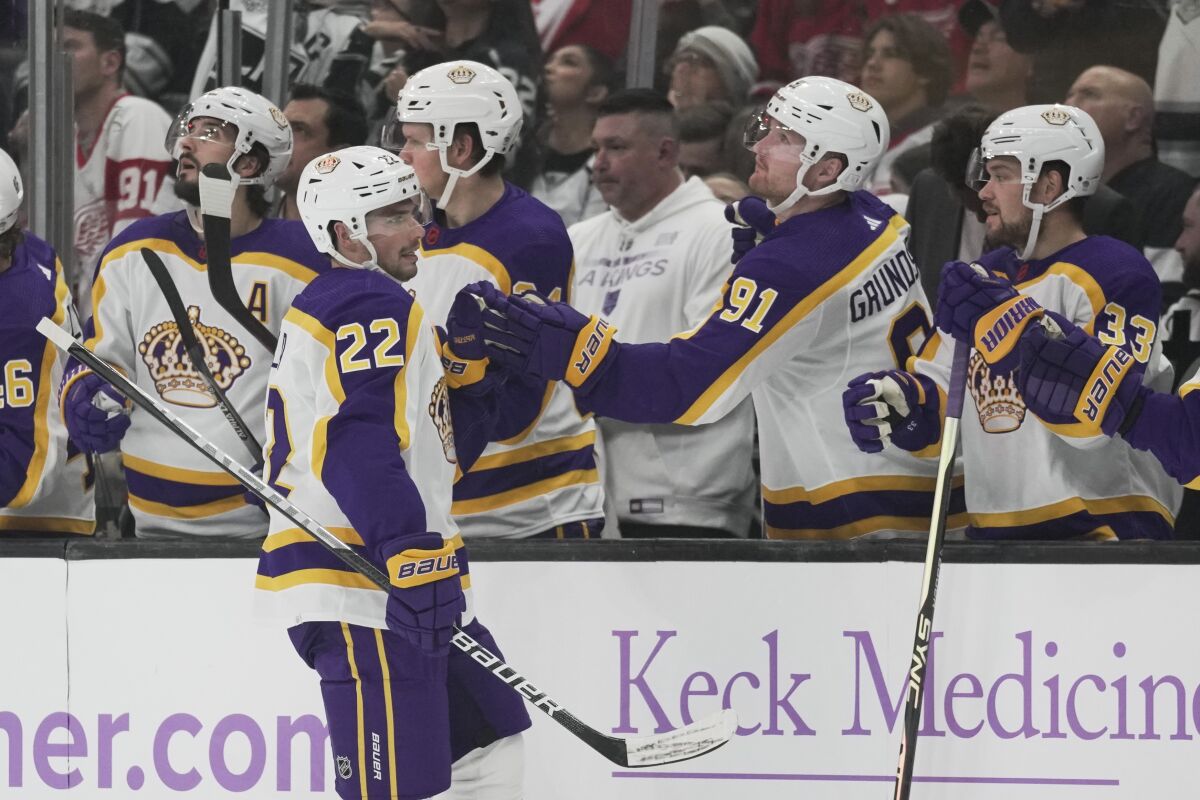 The LA Kings showed off a different setup with their top powerplay unit in Saturday’s 4-3 win over the Detroit Red Wings. It didn’t take long for it to pay off, scoring on their first chance. Overall, the power play went 2-3 with the man advantage, with Sean Durzi adding a tally in the second period.

Here, we’ll take a look at the new setup of the first unit and why I think there’s a lot of potential for success.

First of all, yes, I’m calling it the first unit because that’s what it is. I know, coaches are going to say, “we have two units,” just like they say they don’t number their lines. But in reality, they do. The unit with your big-money stars is your top unit. That’s who they’re going to turn to in a big spot. It’s OK to say that.

The new setup was refreshing to see because it inserted (arguably) the team’s best bumper option where he is likely to be best served, the bumper. Gabriel Vilardi, who has done well down low, mind you, is excellent in the bumper. He demonstrated that in the AHL with the Ontario Reign, and I’ve been beating the drum to get him (or Arthur Kaliyev) there since last season.

Additionally, former bumper option Adrian Kempe moves up to the top, Drew Doughty moves to the left circle, Kevin Fiala stays in the right circle, and Anze Kopitar moves down low. I want to stress I refer to this as “down-low,” not “net-front,” because they are two different things. Kopitar, as an option down low, will include times where he’s in front of the net and also where he is behind the goalline as a passing option.

What I like about this setup is it maximizes handedness. With the right-shot Vilardi in the slot, left-handed Fiala in the right circle, and a left-handed Kopitar down low, those three can make a triangle setup that will be very effective. Also, Doughty being a right-shot in the left circle allows him to be a one-time option for the main distributors (Fiala and Kopitar). This is an excellent shift by the coaching staff.

I’m going to show some clips of the first LA Kings’ power play goal on Saturday, scored by Kevin Fiala, and the events leading up to it.

First, a look at Vilardi. He is going to spend the bulk of his time in this area:

This is in contrast to what we’ve seen far too often from LA during this season so far:

After the Kings gain control, Vilardi gets into his position, and you can see early on the Red Wings have to make sure they account for him:

In this clip, watch the movement of Vilardi (LA13) in the middle of the ice. He’s always making sure he’s an option, moving up and down the slot area. Eventually, he is available for an outlet for Drew Doughty (though Doughty opts for a different play):

It’s that simple movement that has just been non-existent this season. It may not seem like much, but we are seeing the Detroit penalty killers have to at least account for the bumper position.

I mentioned that Doughty opted not to make the play to Vilardi. He decides to skate down low toward the corner but watch Vilardi’s movement again. He pops right up into the circle as an outlet:

The second half of that video is Vilardi recognizing there is a puck battle, and Kopitar needs help. It’s worth noting the goal does not happen without Vilardi’s recognition and going to get the puck.

Finally, we get to the goal. I want you to, again, watch Vilardi. Before Doughty gets the puck on the left wall, Vilardi is again in a good bumper position. The Detroit player has to honor Vilardi. This is something I have been preaching for what seems like an eternity now. Having an effective bumper player will open up the cross-seam pass. Credit to Doughty here; he recognizes it and wastes no time firing it over to Fiala:

It’s one game, and this is one power play, but we saw things just on this one power play that we have not all season. By having a high-hockey IQ player in Vilardi in the bumper, his movement will open up plenty of passing options.

So far, so good for the new look LA Kings power play.