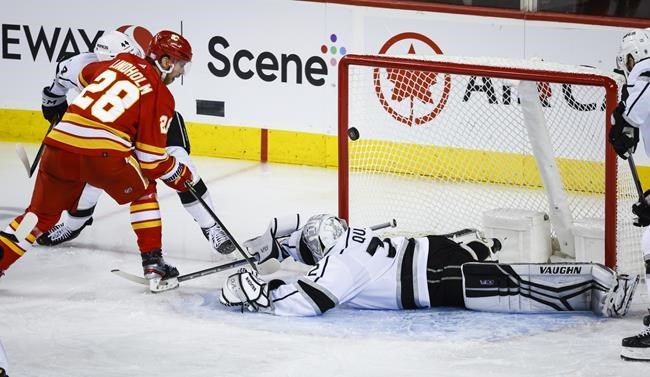 The LA Kings have struggled to keep pucks out of their net through the first 18 games of the 2022-23 season. It’s out of the ordinary for a team that is generally a strong defensive team.

I’ve looked back at all of the goals the LA Kings have allowed this season. For purposes of this article, we’ll look at 5-on-5 goals against only. Also, I am focusing more on goals that came off of in-zone play rather than off the rush. That’s not to say I want to ignore or downplay goals off the rush, the Kings have certainly been beaten by that aplenty this season, but I am very surprised at the continued defensive zone breakdowns from a normally strong defensive zone team.

I’d say close your eyes, but then you wouldn’t be able to watch the videos. So, maybe just make sure you’re sitting down.

*All video courtesy of InStat

First, we take a look at the most recent game in Calgary. The first goal the Flames scored is one of many examples we’ll see throughout this where initially, it seems that the Kings have everyone accounted for, but once one player loses an assignment, it all falls apart.

In the first part of the clip, Sean Durzi is beaten at the offensive blueline leading to a rush on the way back, but you’ll notice the Kings get into their positions and, again, everyone is accounted for. However, after a shot misses the net, things start to scramble, and the eventual goalscorer, Jonathan Huberdeau, is able to lose his man, Viktor Arvidsson.

Next, we’ll go back to a game against Nashville. At the start of the video, you’ll notice that everyone seemingly is accounted for. However, as the play goes on, Brendan Lemieux loses track of his man, and the pass is allowed through the seam with no chance for Cal Petersen.

The next example is one that I noticed a few times. After a wall battle where there are numerous bodies, the play fans out, and there is a brief moment of chaos where everyone is a little uncertain about where to go. In this example, Anze Kopitar gets caught watching the play rather than his man.

Against Toronto another example of the Kings having all players accounted for and in proper body position. Until Sean Durzi loses his man.

There’s a similar example of this in Chicago. Here, again, everyone has their assignment until they don’t. Carl Grundstrom gets caught a little bit in no-man land, with the eventual goal scorer escaping him.

There were two examples in the Kings’ win against the Florida Panthers. First, Grunstrom finds himself a little lost again in the high slot.

And then, down low, everyone has their man for a brief time, but Vilardi overcommits.

So what does this all mean? First, I think this shows that it isn’t as simple as “sit this defenseman” or “trade for that defenseman” because we’re seeing forwards struggle here as well.

Second, this type of man-to-man defensive system requires incredible attention to detail and good communication. There may be times when the players have to switch off an assignment, and as long as that communication is there, it can be OK, but if not, as we see, it doesn’t take much for a missed assignment to lead to a total defensive zone breakdown.

I don’t know that I’d call what’s going on a “system” problem, per se, rather than the players within that system having mental lapses in their coverage. It’s something that Todd McLellan has alluded to with mental mistakes. He’s talked about it with puck management, I would add that it is showing in defensive zone assignments as well.

The Kings have been a team who’s had success in the defensive zone in the past. I don’t think we should completely underestimate the fact that there are different players in different combinations that perhaps are just taking time to gel. However, we’re approaching the 20-game mark of the season, things will need to get better sooner than later.

And, lastly, I know the Kings goaltenders have received their fair share of criticism, and plenty of it is warranted. But I think some of these clips above show that while it’s easy to point the finger at the last line of defense, there are clearly structural breakdowns happening that are putting the goaltenders in a bad spot.