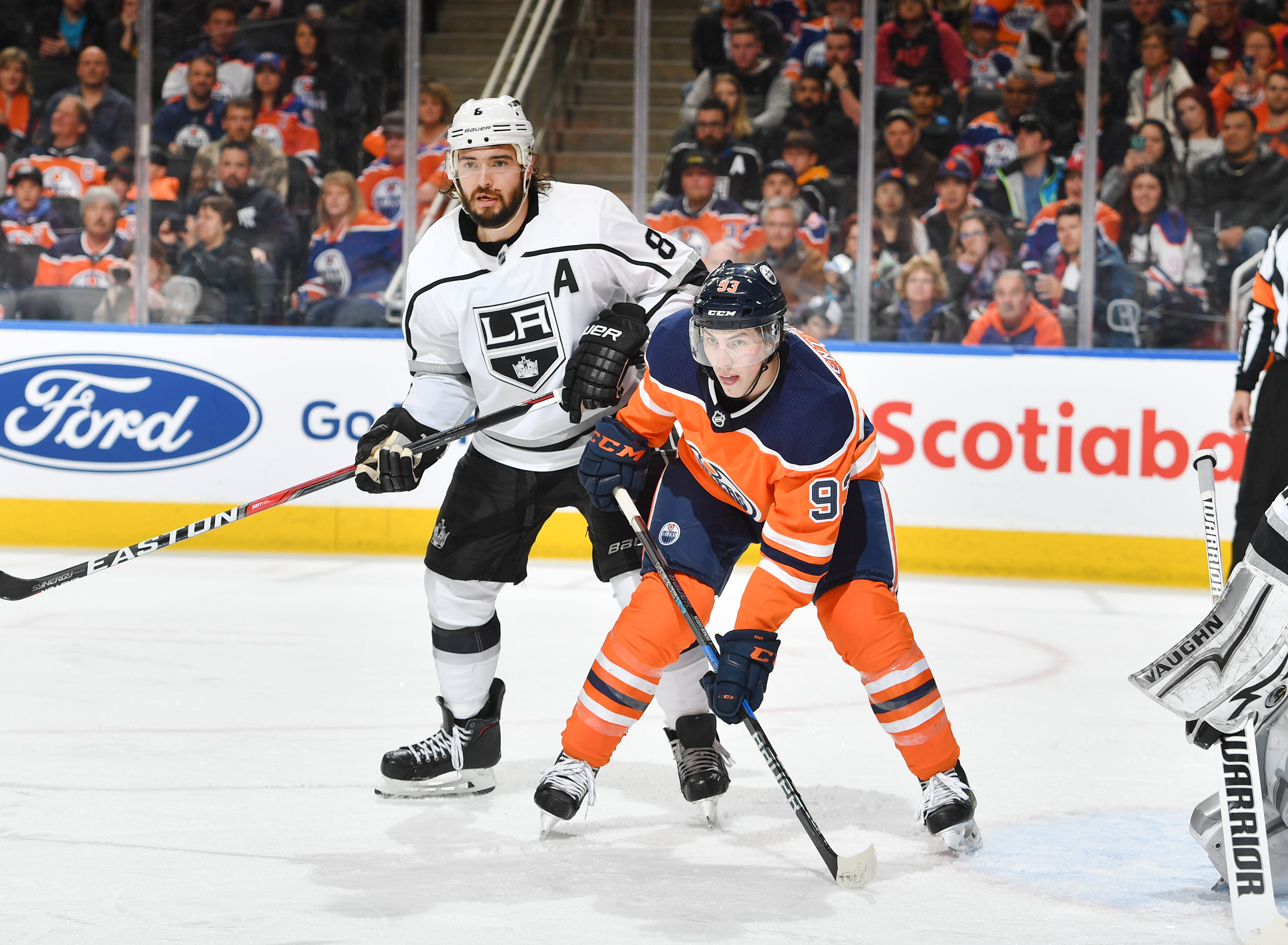 In a rematch of last season’s seven-game playoff series, the LA Kings and Edmonton Oilers meet for the first time in the 2022-23 season on Wednesday.

Here is how the Kings skated at practice on Tuesday:

Despite some third-period line shuffling to try and find a spark on Monday, it looks like Todd McLellan will go back to the lineup that he had to start the game. This seems to make sense; the team certainly didn’t have a problem scoring goals. To me, there one potential change could be the insertion of Jacob Moverare. I’m unsure whether that’d be for Sean Durzi, Alex Edler, or Sean Walker, but it wouldn’t be surprising to see Moverare draw in.

Jonathan Quick played as well as you could for allowing six goals; I’d expect him to get the nod Wednesday with a back-to-back later in the week.

This is how the Oilers skated during Tuesday’s practice:

One thing that may jump out to you is Stuart Skinner being listed above Jack Campbell. The latter has not lived up to his big-money contract that he signed this offseason, posting a 6-4 record with a pedestrian 4.27 goals-against average and .873 save percentage. Skinner, on the other hand, has played quite well. He is 3-3 with a 2.53 goals-against average and a .932 save percentage. Among goalies with five appearances, Skinner falls just outside the top ten in goals saved above expected at 4.9 (per Moneypuck.com).

And oh yeah, Connor McDavid (15G, 17A, 32P) and Leon Draisaitl (9G, 19A, 28P) are numbers one and two in the NHL in scoring. They’ll be looking to feast on a Kings team struggling to find consistency in their own zone.

The Kings have been the better team almost across the board in most 5-on-5 possession metrics. It’s worth noting that while LA has struggled to find consistency, one of the Pacific Division favorites in Edmonton is also struggling to find its game. Matchup-wise, it’s hard to feel good about where the Kings stand trying to slow down McDavid and Draisaitl fresh off allowing six goals in Calgary. The visitors will have their hands full, that’s for sure.

It should come as no surprise that the Edmonton Oilers have one of the league’s best power plays. At 32.2%, the Oil is 2nd best in the NHL. McDavid leads the way in goals (seven) and points (15).

The LA Kings are road underdogs, which is to be expected. BetRivers has the best odds at +128, while the best place to shop for the Oilers is WynnBet’s -145. With the edge in possession numbers, I am not opposed to a play on LA here. Though, if you’re a fan and you’ve been watching them, you know how uncomfortable that may sound.

As for the total, 6.5 is the consensus number. FanDuel has the over at -130, while DraftKings is offering the Under at +115. I wouldn’t be surprised to see this number hit seven.

I’m expecting some pretty high-event hockey on Wednesday, so I will be looking at high-event players to find the scoresheet. For the LA Kings, Adrian Kempe is +145 to score a goal and -140 to register a point. Kevin Fiala and Drew Doughty are +110 and -110 respectively to record assists.

I sang Trevor Moore’s praises on Twitter during Monday’s game; he is +275 to score a goal in Edmonton.

To avoid going with the obvious in McDavid and Draisaitl, I’ll look to Zach Hyman (+165) and Jesse Puljujarvi (+245) to find the back of the net on Wednesday.