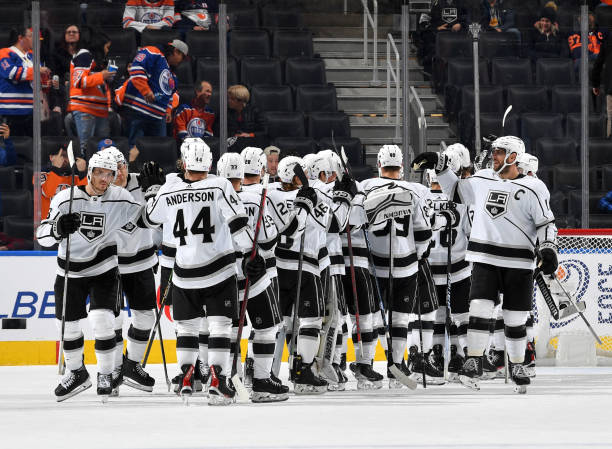 The LA Kings put together their best defensive game of the season in a 3-1 win against the Oilers Wednesday night.

After having one of their worst defensive games of the season on Monday night, the LA Kings responded with a better defensive game against the Oilers. The Kings met the Oilers for the first time since their first-round series in last year’s playoffs, where Connor McDavid – a.k.a Connor McJesus – recorded 14 points in the seven-game series. When facing the Oilers, you always need to be aware when both Connor McDavid and Leon Draisaitl are on the ice. Any hiccup, no matter if it’s a split second, the defender will most likely be on the wrong end of a highlight reel.

The moment the puck dropped, the Kings set the tone early defensively. Everyone was committed and blocking shots. After 20 minutes of play, the Kings recorded 16 blocked shots. In addition to the blocked shots, they also went back to the 1-3-1 neutral zone trap that was very effective for them last year. After the final horn sounded, the Kings recorded 29 blocked shots as Anze Kopitar and Sean Walker led the team with four each. Cal Petersen also made the saves when needed, he deserves some credit too. McDavid and Draisaitl both saw their 10 and 11-game point streaks come to an end and recorded only two shots on goal combined, which came late in the third period.

The Thousand Oaks native recorded his first-ever career hat trick. The second line for the Kings played a really great game but the star of the night was number 12.

After potting the empty net goal, linemate Phillip Danault quickly went over to secure the puck. He knew it was Moore’s first-ever career hat trick. It must feel great for Trevor Moore to record a hat trick for the franchise he grew up rooting for.

A Win Against a Divisional Opponent

It took four games, but the Kings finally got a win against a divisional opponent. While not knowing how the divisional seeding will play out, it is important to rack up as many wins and points as you can against them. So far the Kings are 1-3-0 against teams in the division. I know playoffs are a ways away, but every point in a divisional matchup matters.

UP NEXT: The Kings continue their road trip Friday night as they take on the Vancouver Canucks at 7 PM PT.