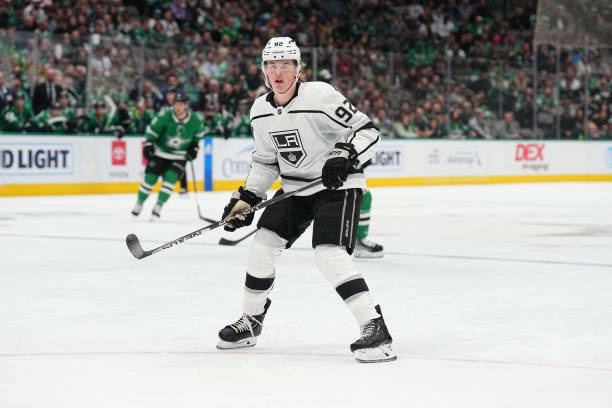 The LA Kings made several roster transactions Sunday morning as they head out for their four-game road trip.

ROSTER MOVES: The LA Kings have announced the following transactions:

Brendan Lemieux suffered a lower-body injury in a 4-3 Kings victory Saturday night over the Red Wings and did not return. After the game, head Coach Todd McLellan didn’t specify what kind of injury Lemieux had but hinted he could be out a while. As a result of the injury, Lemieux was placed on IR.

“He’s probably going to be out for a little while,” Todd McLellan on Brendan Lemieux.#GoKingsGo

In addition to Lemieux heading to the IR, forward Lias Andersson and defenseman Jacob Moverare were recalled to the LA Kings. I don’t expect either Moverare or Andersson to draw in the lineup unless (knock on wood) an injury happens. Both will be brought in as extra bodies for this upcoming road trip.

Finally, Brandt Clarke, who hasn’t played in the last five games, was assigned to the AHL for a conditioning assignment.

Brandt Clarke has been assigned to the AHL for a conditioning stint, per Kings.#GoKingsGo

While Clarke isn’t eligible to play in the AHL because of his age, he is eligible to play down there for a conditioning assignment. The Reign is in action later this afternoon and perhaps Clarke will be penciled into the lineup.