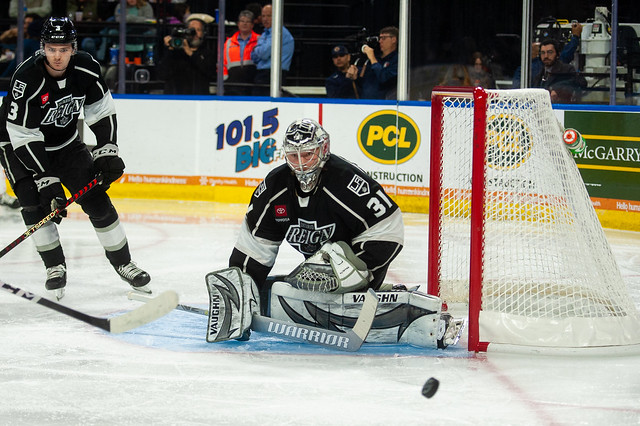 The Ontario Reign could not find much success in a tight game as they fell 3-1 to the Bakersfield Condors Saturday night.

1. Quinton Byfield gets on the board

Quinton Byfield played in his second game since being loaned to the Ontario Reign for a conditioning assignment after being sick for a couple of weeks. Byfield centered with Alan Quine and Samuel Fagemo on the second line, and the trio was arguably the Reign’s best line through 20 minutes of play. Byfield scored Ontario’s lone goal on the night, showing good patience all alone in front of the net, lifting it by the left pad of Olivier Rodrigue.

You do you, Q! pic.twitter.com/qQbjZnrvOC

Overall, I thought Byfield had a good game and was noticeable in the offensive zone. It’s a good step for him as he goes through his conditioning assignment and looks to get back up to speed. He will need to keep showing progress, and hopefully, plays like that will carry over to the NHL.

The Condors play a simple style of hockey. It may not be pretty, but it’s effective. That style of play has led them to two victories over the Reign this season. Once again, the Condors played a tight-checking game and didn’t give up many dangerous chances at 5-on-5. Down by two with two minutes remaining and with the extra attacker, the Condors didn’t give the Reign any space.

They did a great job getting in shooting and passing lanes, and when the Reign were forced to dump the puck in the zone, the Condors were first to retrieve it and clear the puck. They did a good job protecting their two-goal lead in those final two minutes. Outside of the second period in the second matchup, the Condors defensively have limited the Reign’s chances offensively. They seem to have the Reign’s number early this season.

Who’s the head coach of the Reign? Okay, let’s not go there. During Ontario’s three-game losing streak, the power play has gone 1-for-13 (7.7%). During that stretch, the Reign have had two five-minute major power plays and a 5-on-3 and didn’t convert on any of those. You may recall the Ontario Reign had the best power play last season and in AHL history.

This season, through 11 games, the power play ranks tied for 19th (20%). They’re getting great chances but can’t find a way to get the puck in the net with the man advantage. With ten minutes left, the Reign had great looks on two power play opportunities but couldn’t get one by Rodrigue, including a shot off the post by Akil Thomas. Once the power play starts clicking, they’ll be fine. Don’t hit the panic button yet.

UP NEXT: The Reign are back at it again Sunday afternoon as they return home and face the San Diego Gulls.