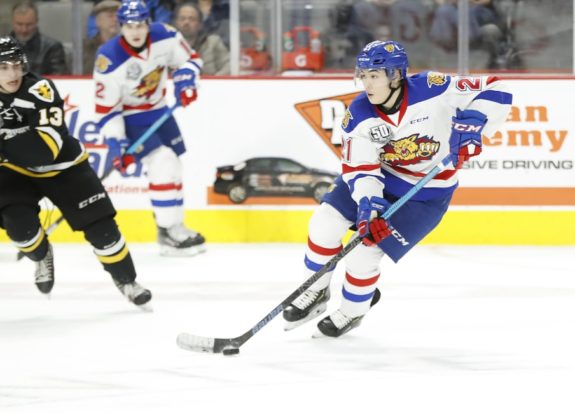 LA Kings 20-year-old defense prospect Jordan Spence will look to make an impact in his first year with the AHL’s Ontario Reign.

If you haven’t figured out by now, the right side of the LA Kings defensive prospect pool is getting deeper with talent. Australian-born Jordan Spence is one of those looking to throw his name in the hat.

Selected in the fourth round of the 2019 NHL Entry Draft by the Kings, Spence is among fellow right-shot D-men Austin Strand, Sean Durzi, Helge Grans, Brock Faber, and Brandt Clarke looking to play in the NHL in the next couple of years — and these aren’t even among the trio already in LA.

While it seems fairly obvious that there won’t be room in the organization for all of them, it’ll give you a headache trying to guess who could be the one(s) moved out (trust me, I know).

For now, let’s try to unpack a bit more of what Spence’s game is all about and where he may need to improve to get to the NHL.

Originally born in Sydney, Australia, before moving to Japan, his story is unlike most others that lace up the skates for a living.

Those 43 assists in 68 games had him among the best in the league, at only 17 years old (chart via QuantHockey):

You see his progression over his following two seasons in his assists-per-game. By his age 19 season, he was among the best overall points-per-game producers in the Q:

Production like this isn’t going to go unnoticed, and sure enough, he was awarded the QMJHL Defenseman of the Year for the 2019-20 season. That year, he went 9-43-52 in 60 games.

The highlight for Spence that season was surely being named to Team Canada’s World Junior team. While he didn’t see much ice time, he made the most of it, scoring a goal in his first game:

I think Durzi and Strand are likely to start on the top two pairs with the Reign, leaving the third spot open for Spence to try and wedge his way in.

Entering the first year of his entry-level contract, his prospect status varies. Two models below appear a bit split on his NHL likelihood:

It should be noted that JFresh’s model is based on overall WAR, while Hockey Prospecting will lean in on more of the offensive production.

He has been praised for his Hockey IQ among some scouts and his passing and vision elsewhere.

The offensive side of his game is his moneymaker to date, but I don’t know if there is a significant carrying tool to cling to.

His “Hockey IQ” and high-end passing ability were able to carry him in Junior. But what gives me pause are the questions about his skating. As a smaller defenceman at only 5-foot-10, I’d be more inclined to buy into the offense continuing at the next level if he were a better skater.

You can see in this video from his 2019-20 season that there are positive signs in his play-making ability in the offensive zone. However, there isn’t anything to glean, at least for me, that he’s a strong skater:

Now, I should be very clear. I will not base my opinion on a four-minute highlight clip. But, it did raise a question for me, and I’m not alone.

From Corey Pronman in The Athletic:

“Spence is an extremely smart defenseman who can create offense with his play-making at a high level. But he’s also a smaller defenseman without great mobility, so his ability to defend in the NHL will be a question.”

These questions about his skating have been around since before his draft year:

“Surprisingly, however, for a small player, his skating ability is only average. He’s not overly quick, and because of this, he struggles to create open ice for himself, and this also makes it harder on him when trying to take away time and space from the opponent.”

The good news is that he recognizes where he needs to improve.

Spence talked about this in Development Camp, how he put weight onto his frame:

“Two years ago, I was still a smaller guy. I was probably 5-foot-9, 5-foot-8, 165 pounds. Over those years, I just wanted to just work on my lower body and just gaining more muscle and obviously becoming stronger and faster throughout the season. And right now, I feel good with my body. I put up 10 to 15 pounds, and on the ice, I feel good on the ice as well.”

As well as working on his defensive-zone play:

“(The Kings) really want me to work on my defensive game as well. You know, I’m a defense[man], so in order to be a good player, and to be an impact player, on any team, I have to defend well. After I do that and kind of do my thing in the offensive zone, I’ll become a better player.”

I’m encouraged by the fact that he is aware of where he needs to improve and took care of part of that on his own with getting stronger. While he still has work to do, it’s now up to the Kings’ development staff to mold him into a more well-rounded player.

When you’re working with someone who can think the game like Spence does, that will always help. But the fact of the matter is that if the skating can’t get to another level — as he gets to another level — it’ll be tough for him to progress.

While there are questions on his skating, there are none on him putting in the work to improve that. One of his former assistant coaches, John Torchetti, had this to say last year:

“He gets it. He’s way ahead of the curve on how to eat, sleep and train, on and off the ice. Those are the type of kids that are going to be great NHL players. He will find a way to make an NHL roster and be an impact player. That’s when you know you’ve got the right kid.”

At the end of the day, Spence’s play on the ice will do the talking, and we’ll get another chance to see him at this weekend’s rookie tournament.

If his skating takes another step, combined with his instincts and passing ability, he will be an intriguing prospect.

LA Kings Jordan Spence on AHL: “I have to adapt to the game”