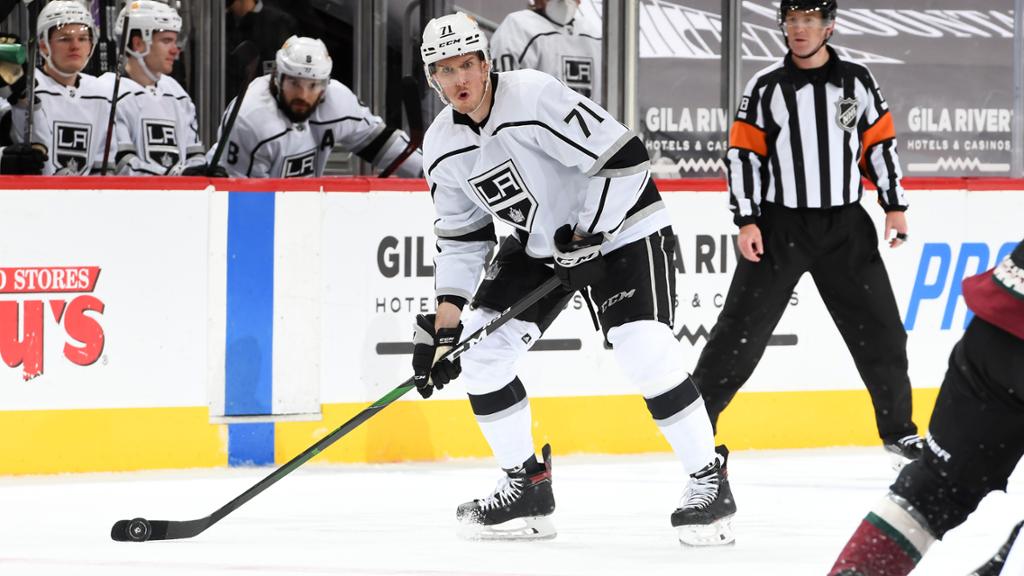 24-year-old Calgary native Austin Strand will look to separate himself from the pack on the right side of the LA Kings defensive depth chart.

Next up in our Ontario Reign player previews is someone who played 13 games last season in the NHL: right-shot defenseman Austin Strand.

The 24-year-old signed a one-year deal last month to stay in the Los Angeles Kings organization. While most of his time was spent in Ontario, his cup of coffee with the Kings was the first NHL action he’s seen in his career. He managed one assist in those 13 games while averaging 13:51 minutes per game — the vast majority of that during 5-on-5 play.

In 19 games with the Reign, Strand had a goal and four assists. The offensive side of his game is his calling card, establishing himself as nearly a half-a-point-per-game player as a defenseman in his junior career. Before signing with the Kings, Strand split time in the WHL with the Red Deer Rebels and the Seattle Thunderbirds, picking up 32 points in 74 games during the 2016-17 season.

Undrafted, the Calgary native signed a three-year entry-level deal with Los Angeles in November 2017. He spent the 2017-18 season in Seattle of the WHL again and his offensive game blossomed, scoring 64 points in 69 games. By his age-20 season in the WHL, he was among the top producers in assists- and points-per-game (charts courtesy of QuantHockey):

That said, if we’re being honest, it wasn’t until he was beyond his teen years – and in his fourth season – where the offensive numbers peaked, which is something you’d probably expect to see from an older player in junior.

Before his 19 games with the Reign this past season, he played 64 games in the AHL during the 2018-19 and 2019-20 seasons, scoring 15 goals and 33 points. When you see the type of shot he possesses, it’s no surprise why he’s an offensive threat from the blue-line.

There’s nothing overly fancy about either of these goals (unless you enjoy the water bottle on the second one) – he simply gets into a space where he’s a threat to shoot, and he does the rest.

This one, there’s a bit more skill involved, with a nice curl and drag around a sprawling Tuscon forward – and then, of course, the blistering shot.

On the defensive side of his game, I think there’s still work to be done. The first two goals against in this clip are the focus.

In the first one, Strand is late to get back in the play after going down on a back-check but is up long enough to recognize the developing play. In the second, while it is short-handed, he follows the puck carrier to the corner and allows himself to get pulled a little too low while his back is to the slot.

The first goal against in this next clip is the one that I want to point out.

San Jose enters the zone in a 3-on-3 situation, and Strand is in the perfect position to take his man.

However, as you saw in the video, Strand allowed the Barracuda forward to get three uncontested attempts at the puck – the last two from his knees, eventually ending up in the net. It is just another example of the 6’4″ defenseman not being as engaged as I’d like to see.

So, where exactly does Strand fit into the Kings’ plans?

Hockey Royalty’s Ryan Sikes did a nice job breaking down where the Kings’ defensive depth chart sits today. The unfortunate part for Strand is that he is right-handed. There doesn’t appear to be much wiggle room at the NHL level, as Ryan points out in his article, with Doughty, Roy, and Walker taking the top three spots.

That said, Strand is certainly right in the mix to be an option if there is an injury. His most immediate competition for the “next-in-line” on the right side is likely Sean Durzi and Jordan Spence. Both are a bit younger (22 and 20 respectively).

During his time in the NHL, the vast majority of Strand’s minutes were spent with Olli Maatta. The results weren’t pretty (stats courtesy of Natural Stat Trick):

It’s necessary to point out that it was only 13 games, so the numbers should be taken with a grain of salt. I also think that it’s not likely he’d see much time with Maatta if he were to get the call. I believe that the Finnish defenseman could be waived, potentially opening the door for a couple of younger left-shot defensemen. And Mr. Sikes also is keen on a big season from Kale Clague (a notion I wholeheartedly endorse) and potentially an LD2.

So hey, while we’re having fun with small samples, how did a Clague-Strand pairing look in the NHL last season? Funny you should ask…

Yeah, yeah, it was only 29 minutes. I said I was having fun, remember?

Truth be told, at 24 years old – though still a restricted free agent after the season – it is a big year to see where Strand fits in the organization. Right-defensemen is among the deeper of the positions in the Kings’ prospect pool and improved significantly this offseason with the drafting of Brandt Clarke.

I expect to see him start the season in a top-four role in Ontario, but with heavy competition.

He possesses a good shot and smart offensive instincts, but the defensive side of his game will need to improve for him to solidify that top-four role in Ontario and/or be in line to get the call to Los Angeles.