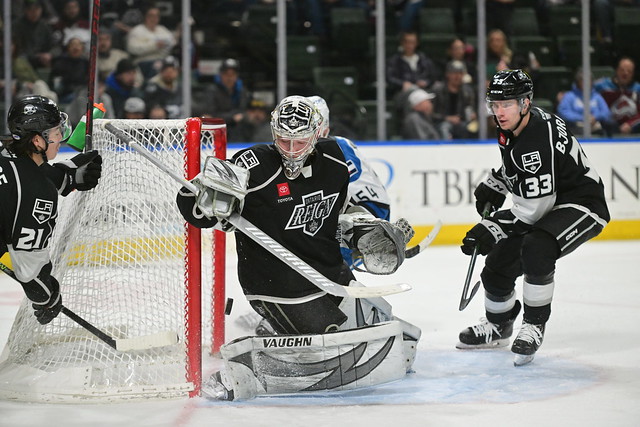 The Ontario Reign managed to salvage a split as they dropped game two of the back-to-back series against Colorado, 5-2.

Here are the three takeaways from Wednesday’s 5-2 loss:

In game one of the back-to-back set, the Colorado Eagles play a good 30 minutes but would give up six unanswered goals to the Ontario Reign in a 7-3 loss. Last night started out the same way but the result was different. From the drop of the puck, the Eagles were the better team. This game reminded me of the second game of a two-game series the Reign played the Eagles in Colorado back in November where Colorado just dominated from start to finish.

The Reign just couldn’t muster much offense in the early stages. Altitude effect or not, the Eagles were clearly the better team in all areas in this one. Ontario did manage to split the two games in a tough building to play in, so there’s that.

Back in action this weekend for First Responders Night! pic.twitter.com/x6Z26CvizG

It’s been a rough season for Kim Nousiainen. After coming over from Europe, Nousiainen is still adjusting to hockey in North America as he has been in and out of the lineup. After a rough start to the season, Nousiainen finally had something to smile about. With the Reign trailing 4-0 early in the third period, Nousiainen was aggressive in joining the rush and got rewarded by putting home the rebound off the initial shot by Martin Chromiak. By the way, Chromiak now has eight points in his last six games.

You always remember you first! pic.twitter.com/YvNw37fYOd

As you can see in the clip Nousiainen is aggressive in joining the rush as he likes to do that at times. Limited playing time or not, let’s hope there are a few more Nousiainen goals this season.

Matthew Villalta has had a solid season for the Ontario Reign posting a record of 6-5-0-1 to go along with a 2.55 GAA and a .908 save percentage. Not elite numbers but better than his previous two seasons. However, it was a rough one for Villalta. There was one goal allowed by Villalta that summed up the night for the Reign. The third goal scored by the Eagles looked harmless until it wasn’t. The puck was moving in the blue paint toward Villalta and looked like he would cover it for a faceoff. No problem, right? One problem, Villalta looked like he covered it and the puck still squeaked by him and into the net. That’s a goal he’ll definitely want to forget.

Villalta gave up five goals on the night which is the third time in the last four games he has allowed three or more. The Reign will need him and Cal Petersen down the stretch as they have five of their next six games against teams above them in the Pacific division.

UP NEXT: The Reign will be back in action on Saturday at home against the Coachella Valley Firebirds. The game starts at 6:00 PM PT and can be seen on AHLTV.