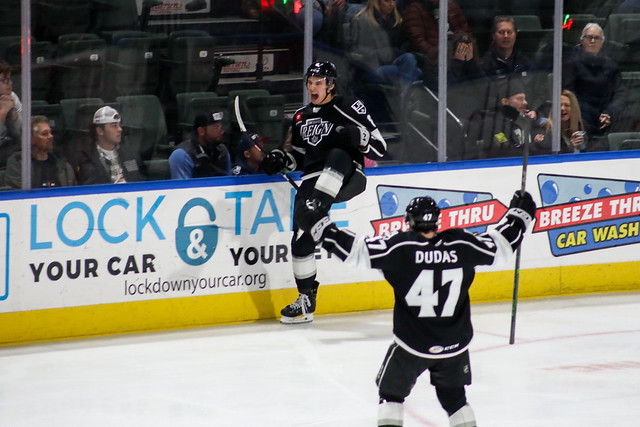 The Ontario Reign overcame a slow start by scoring six unanswered goals to steal the first of two games in Colorado, 7-3.

There's nothing like watching Wagner turn on the wheels! pic.twitter.com/fCQxVuHth0

Here are the three takeaways from Tuesday’s 7-3 victory:

It’s not how you start, it’s how you finish. The old saying is a good way to describe the Ontario Reign’s 7-3 win last night. The Reign got outshot 8-4 in the first period, along with going 0-for-3 on the power play. In addition to those two things, the Colorado Eagles struck first with a goal by Josh Jacobs just 2:42 into the contest.

It didn’t get any better as Jean-Luc Foudy beat Cal Petersen blocker side 1:32 into the middle frame to give the Eagles a 2-0 lead. TJ Tynan scored less than three minutes later to cut the lead in half, but Colorado would strike back just over four minutes later to regain their two-goal lead.

The Reign have had their fair share of horrors in Colorado, so it would have been easy for them to throw in the towel, but not last night. Everything changed when the Reign had a 5-on-3 power play for 1:58. Samuel Fagemo scored off a one-timer from the left circle to start the comeback and Ontario never looked back scoring five more unanswered goals after Fagemo’s tally. A slow start ended up being a strong finish.

A 🚀🚀 by Fagemo on the power play! pic.twitter.com/BXBnMf4rnm

Alex Turcotte returned to the lineup last night after missing the last five games due to an injury he suffered against the Bakersfield Condors on January 4th. However, the start of the game didn’t go well for the 21-year-old. Early in the second period Turcotte took a puck to the face and got up slowly and eventually headed to the Reign dressing room and wouldn’t return for the rest of the period. Luckily for Turcotte, he was able to return to the game in the third period wearing a face shield.

The third period was probably one of the best periods Turcotte has played all year. Turcotte recorded a goal and an assist in the third period. Both of his points were off of turnovers because of great puck pressure or on the forecheck.

What's better than a power play goal? A shorthanded goal.

Alex Turcotte has his 5th of the season! pic.twitter.com/PZXrrXMPgi

In the last four games Turcotte has suited up, he has recorded at least one point in all of them.

Four players for the Reign last night had a multi-point game and 13 players recorded a point. Once again, the Reign got contributions from almost everyone in the lineup. During their five-game win streak, they have been getting contributions from their top players, and players like Aidan Dudas and Martin Chromiak have provided secondary scoring as well.

The Reign will need to keep that up as their schedule gets tougher to close out the month.

UP NEXT: These two teams will meet again tonight for the rematch. The Reign will look for the sweep, while the Eagles will look to salvage a split. The game starts at 6:05 PM PT and can be seen on AHLTV.