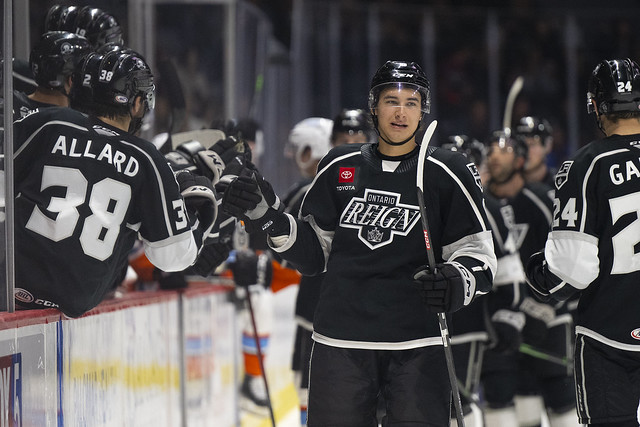 The Ontario Reign played a full sixty-minute game as they defeated their Southern California rivals, the San Diego Gulls, 3-1.

Here are the three takeaways from Friday’s 3-1 win over San Diego:

After retiring in September, Tyrell Goulbourne decided to give his hockey career another shot and signed a professional tryout (PTO) with the Ontario Reign on January 5th. Last night Goulbourne made his Reign debut as Andre Lee was out of the lineup. Goulbourne didn’t waste any time making his presence known as he dropped the gloves with Travis Howe of the San Diego Gulls 2:44 into the game.

Goulbourne wasn’t done there. At the 8:18 mark of the third period, after Wagner got denied on a partial breakaway and Lukas Dostal out of position in the net, Goulbourne put home the loose change for his first goal as a member of the Ontario Reign.

Goulbourne’s role is similar to Jacob Doty, who is out with an injury right now. He won’t provide a ton of offense but with throw his weight around and not be afraid to drop the gloves. Good to see him chip in with a goal.

It was a slow start to the year for Martin Chromiak, but he is starting to come around. After not scoring in his first 13 games, Chromiak has found the back of the net twice in his last three games and has recorded points in three straight games as well. He is starting to look comfortable on the ice and had a game-high six shots on goal.

It’s all about confidence. I like to think of it as a three-point shooter in the NBA. When a player is struggling and makes that one shot, they can get on a roll and catch fire quickly. The same thing can be said for a goal scorer in hockey. Once they get that one goal, you would be amazed at how much that can be as a confidence booster. Perhaps we are starting to see that with Chromiak. I guarantee the Reign are glad to see Chromiak starting to score and play better as a whole. His goal last night was the game-winner for the Reign.

Dominant from start to finish

Last night was a sixty-minute game from the Ontario Reign. From the moment the puck dropped to the final whistle, they dominated and never let up. Ontario was relentless on the forecheck, caused turnovers, and outshot San Diego 17-3 in the opening frame. Matthew Villalta wasn’t busy all night, but made a couple of saves in the third on the penalty kill keeping the Reign in front, 2-1.

The Gulls only had 18 shots in the entire contest and half of them came in the third period. If it wasn’t for Lukas Dostal, the game isn’t even close. He kept San Diego in the game and was named the first star of the game for his performance. Head coach Marco Strum had to have been pleased as the Reign were focused and locked in from the start.

UP NEXT: These two teams will be back in Ontario tonight for the rematch at Toyota Arena. The game starts at 6:00 PM PT and can be seen on AHLTV.