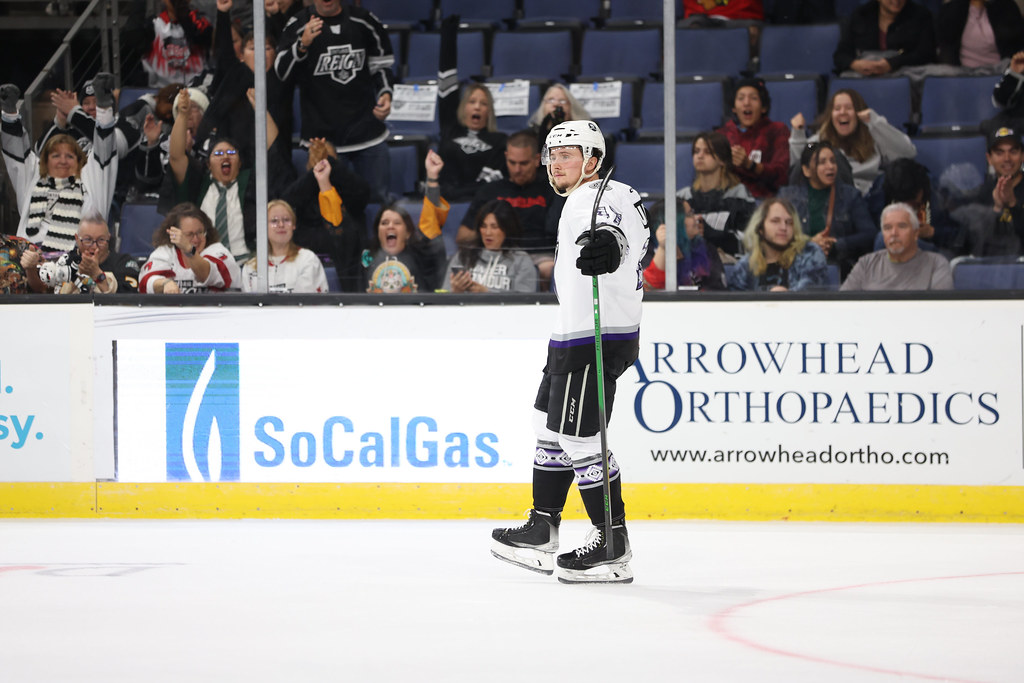 The Ontario Reign extended their win streak to five games with a one-goal victory over the Bakersfield Condors Saturday night.

1. Fagemo injured in the first period

Samuel Fagemo did not finish the game for the Ontario Reign. Midway through the first, Fagemo took what looked to be a high hit. He got up slowly and looked to be okay as he skated toward the bench. Fagemo would eventually go to the locker room and would not return for the remainder of the game.

Fagemo has now headed down to the locker room. https://t.co/rrmBqxl2eN

Alan Quine would move up to the first line and the first powerplay unit for the rest of the game. It will be a big blow if Fagemo has to miss time, as he’s tied for the team lead in goals with four.

2. Akil Thomas x2 on the powerplay

It’s great to see Akil Thomas healthy. Last year Thomas started the season on the shelf as he recovered from double shoulder surgery in the offseason and didn’t hit his stride until the last month of the season. That hot streak from the end of last season and the Calder Cup playoffs has carried over into the 2022-2023 season.

Thomas struck twice on the man advantage in the second period, just 1:56 apart. His first goal was a perfect example of how great he is in the bumper position (the video is at the beginning of the article). His second goal came off a missed shot with the puck bouncing in front of the net, where Thomas picked up the garbage for his second power-play goal of the game.

Thomas now has four goals on the season in seven games and is tied with Aidan Dudas and Samuel Fagemo for the team lead in goals.

The Reign penalty kill has shown improvements from last year so far. Through seven games, the Reign are 23-for-27 on the penalty kill. That is 85.2% and good enough for 7th in the AHL. The Reign went 6-for-6 on the penalty kill against the Condors, including a 6-on-4 chance with 25 seconds remaining in the game. With the Reign having a lethal powerplay, it’s good to see them kill off penalties too. They are currently top ten in both categories.

UP NEXT: The Reign will travel to Colorado for a two-game series against the Colorado Eagles. The first game is Thursday at 6:05 PM PT.