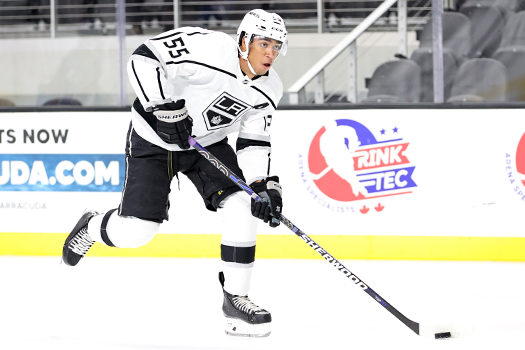 The Rookie Faceoff in San Jose wrapped up on Monday with the LA Kings shutting the host Sharks 3-0.

Jacob Ingham started the game and, along with David Hrenak, made 19 saves in a combined shutout for the LA Kings.

James Stefan opened the scoring with a pretty backhand:

Aatu Jamsen would also add a pair of goals for the Kings.

As was the case on Friday night, Quinton Byfield controlled virtually every shift he was on the ice.

Byfield with another dominating offensive zone shift that doesn’t result in a point.

He and Chromiak will team up for goal here soon.#GoKingsGo

He picked up his lone point of the weekend on the Jamsen empty net goal, but he was far more effective than what the scoresheet would reflect. Whether he was picking up the puck with speed through the neutral zone or working along the wall and behind the net in the offensive zone, he was a difficult player to contain for the San Jose youngsters.

Byfield also saw time on the power play and the penalty kill. While with the man advantage, he played the left circle and made many good decisions with the puck, picking out the right passing option or taking the shot himself.

The next step for the highly touted prospect is to have a strong camp and preseason against NHL talent.

Akil Thomas primed for a breakout

Thomas ended last season very strong and has looked good during this Rookie Faceoff. Like Byfield, he played in all situations and has shown his versatility in being able to play in multiple different positions on the power play. On a first-period penalty kill, he broke free down the left wing, using his speed out wide, and created a scoring chance. Later in that same kill, he made a great read in the defensive zone using his stick to break up a cross-seam pass.

He’s healthy and looks like he’s ready to have a big season with the Ontario Reign.

It seems Kim Nousiainen has had a little bit of a coming-out party for Kings fans this weekend. He played just eight games with the Reign last season, so this is the first look for a lot of people.

On Monday, the 21-year-old left-shot defenseman was very active, jumping into the rush – at times leading the rush – through the neutral zone and into the offensive zone. Nousiainen led all players with five shots on goal.

Ontario Reign play-by-play man Josh Schaefer noted on the broadcast that Helge Grans was looking forward to playing with Nousiainen. The duo could be an exciting pair in Ontario.

Other players of note

Tyler Madden – I thought Madden had another good game. He showed good speed in the two games he played. On a rookie team loaded with talent, it was Madden who played the bumper role on the top power play. He saw a lot of time in this role with the Reign last season as well.

Francesco Pinelli – Pinelli was very active again. He is certainly involved in the action, particularly in the offensive zone. There are still times when he is caught out of position in the defensive zone, but with the plan for him to be spending the upcoming season in the OHL, there isn’t anything to be concerned about.

Brandt Clarke – I don’t know yet if Clarke is an NHL-ready defenseman, but someone is going to have to help me out with how he wasn’t selected for Team Canada in the World Juniors. His skating going forward and skill level with the puck is tantalizing. The questions about how he handles speed coming at him and some work in the defensive zone are fair, and those may keep him out of the NHL for this season, but I cannot understand his Canadian omission.

Aatu Jamsen – The Rookie Faceoff was the first time I’ve had a chance to watch Jamsen in games, and there’s plenty to like here. I don’t know how high the ceiling is, but his being used with the top players in this tournament and on the power play is noteworthy. His play along the wall, behind the goal line, and in tight areas caught my attention, he protects the puck very well. The 20-year-old is worth keeping an eye on.

And with that, we turn to Training Camp, which begins this Thursday.