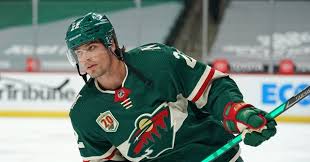 Kevin Fiala is an LA King

The long wait is over. The LA Kings (finally) acquired that scoring winger they have long been missing, and his name is Kevin Fiala.

We’ve acquired Kevin Fiala from the @mnwild in exchange for D Brock Faber and our 2022 first-round pick.

Shortly after we learned of the move to bring in Fiala, a restricted free agent at the time, the Kings announced a new seven-year contract extension carrying an average annual value (AAV) of $7,875,000.

On paper, Fiala is precisely what LA needs, a legitimate top-line winger. During the 2021-22 season, he finished tenth among all players in the NHL in 5v5, scoring 53 points. More points than such players like Jonathan Huberdeau, Alex Ovechkin, and Nathan MacKinnon.

The @lakings are getting themselves an absolute stud in Kevin Fiala. 🤩

Check out some of his top plays from this past season. pic.twitter.com/d5FaVC94Om

So, what exactly are the Kings getting in the 25-year-old Swiss native? Let’s take a deep dive into the individual player and where we see him fitting in the Kings’ lineup.

With the recent additions of players like Trevor Moore, Phillip Danault, and Viktor Arvidsson, we’re seeing the Kings focus their strategy on a more transition-style of offense, and that’s the type of game Fiala loves to play. His ability to navigate a defensive wall at his opponent’s blue line is quite the sight. Whether it be with creative lateral movement or pure speed, controlled zone entries come relatively easy for him. That is just what the Kings are looking for.

Much like Arvidsson, his former teammate in Nashville, Fiala loves to shoot the puck. His individual Corsi rate per 60 minutes during 5-on-5 play (iCF/60) of 17.6 was second on the Wild, trailing only Kirill Kaprizov. The difference, however, between Fiala and the rest of the LA Kings’ current crop of wingers is his finishing ability. His shooting percentage of 13.6% during 5-on-5 play last season would’ve been second only to Phillip Danault’s 16.3%, according to evolving-hockey.com.

This part is easy. You don’t pay a player close to $8 million per year not to have him on the top line. Fiala should slot right in alongside Adrian Kempe and Anze Kopitar as one of the first-line wingers. A spot that saw a revolving door of players try their best to fill this past season. With two legitimate goal scorers on his wing, Kopitar now has the potential to eclipse that elusive 100-point total for the first time in his career.

Where Fiala fits on the power play is a little more challenging to determine. Looking back at his stint in Minnesota, the winger saw most of his power play time along the half-boards as a one-time option. I envision that’s where Todd McLellan would like to start him, but with other great shooters like Kempe, Arvidsson, and Kaliyev in the mix, it’ll be interesting to see if that is indeed where we see Fiala start on the man advantage.

This past season was the first time in Fiala’s career he saw regular minutes on the penalty kill, but I don’t see that happening much in his time in LA. Even though Fiala was one of only two players that scored a shorthanded goal for the Wild last season, the Kings need to keep him rested and save him to be a productive 5-on-5 player.

It’s an exciting time to be a hockey fan in Los Angeles. Management is showing a commitment to building a Stanley Cup contender, and the patience shown by fans through the rebuild is starting to pay off.