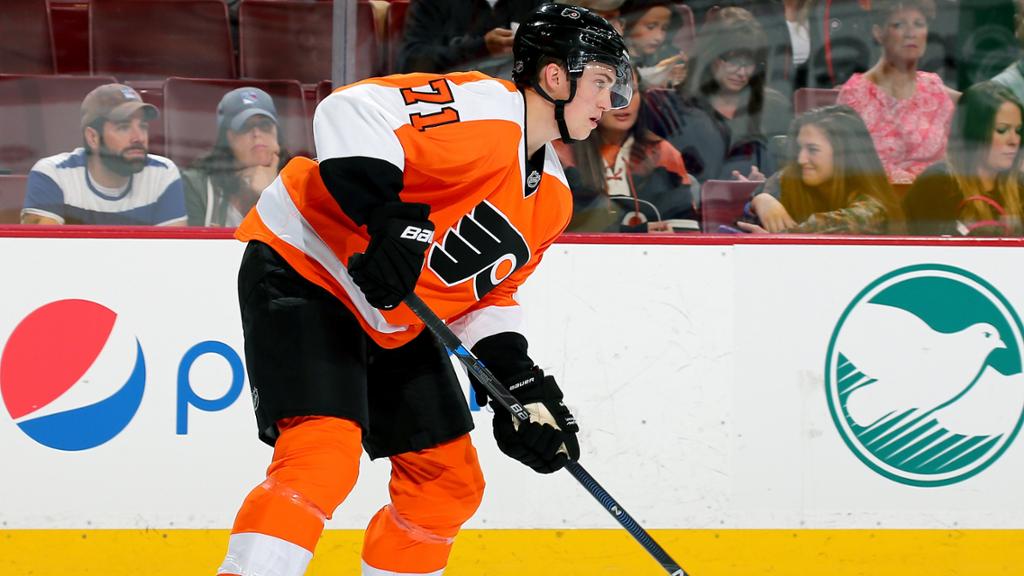 After the LA Kings‘ acquisition of forward Kevin Fiala, general manager Rob Blake is left with just under $12 million in cap space to keep adding to his roster.

However, with restricted free agents like Adrian Kempe, Mikey Anderson, Sean Durzi, and Carl Grundstrom needing new contracts, the Kings could be forced to be selective.

Here are Evolving Hockey’s contract projections for the players mentioned above:

For example, Fiala was projected to fetch an eight-year deal at $9.4 million AAV; the Kings got him at 7×7.9. Still, Los Angeles could be looking to move some money around or part with a player to free up cap space.

Looking at the roster, the Kings’ biggest hole to address this summer is a left-shot defenseman. I previously touched on several that Los Angeles could target in free agency. How about ones they can target in a trade? Let’s look at three.

Entering the offseason, the Philadelphia Flyers have just over $5 million in cap space via CapFriendly. 2019 first-round pick Cam York had an impressive showing in 30 games last season, scoring three goals with seven assists for 10 points.

Someone like Travis Sanheim, an RFA after the 2022-23 season, could be made available via trade, especially after the Flyers committed a bunch of money to Rasmus Ristolainen.

Some wondering if Risto extension opens the door to a Travis Sanheim trade either before the deadline or in the offseason. He would be pretty high on a few teams target lists. Left shot, $4.675 cap hit through next season. https://t.co/gBbTqqrQAt

For the Kings, Sanheim makes a lot of sense. His $4.7 million cap hit next year is doable, but, as noted, Los Angeles could have to move some money around to make it all work.

Sanheim, 26, fits within the age bracket that the Kings are looking for in a young, left-shot defenseman. He had a solid year on a bad Philadelphia team, potting seven goals and 24 assists and a +9 in 80 games.

At 6-foot-3, 208 pounds, he would give the Kings the size needed along the blueline. He also blocked 142 shots last year; another plus. And while he doesn’t offer as much on the man advantage as some other defensemen, Sanheim also wasn’t utilized that much on the power-play, logging just over 54 minutes TOI last year.

During the 2018-19 season, he logged a career-high 84:34 TOI on the power-play, scoring two goals with three assists, so there could be something there with more minutes.

Vince Dunn is a capable defenseman who can play at a high level. Still just 25 years of age, he’s already completed five NHL seasons, including his first in Seattle last year after the Kraken selected him in the expansion draft.

At 6-foot-0, 203 pounds, Dunn would give the Kings some toughness along the blueline, which could play an even bigger role should Los Angeles let Brendan Lemieux walk in free agency. Not only did he record the first goal at the Climate Pledge Arena, but Dunn also logged the first fight in franchise history.

Vince Dunn gets the first fight in Kraken history pic.twitter.com/yRvNtrAWOj

Added, Dunn has shown the ability to put up some points from the back end. Last year, he recorded seven goals and 28 assists for 35 points, despite shooting the puck at just a 5.8 percent clip, which is the second-lowest of his career.

He offers a bit more than Sanheim on the power-play, logging over 160 minutes TOI last season, scoring two goals with nine assists for 11 points in that department.

Dunn is entering the final year under contract before becoming a restricted free agent. He comes at a very reasonable $4 million. The Kraken have approximately $23 million in cap space this summer, but they have several free agents to re-sign. Dunn could be moved to create some financial flexibility, but there could be some hesitancy to move him to a Pacific Divison opponent.

It will be interesting to see what happens with the Colorado Avalanche this summer. The defending Stanley Cup champions have about $25.7 million in cap space, but they have several free agents, including Nazem Kadri, Valeri Nuchishkin, Arrturi Lehkonen, Josh Manson, and Darcy Kuemper. Not to mention they need to pay Nathan MacKinnon before next summer.

Might the LA Kings be able to pluck Samuel Girard from the Avalanche?

The 24-year-old is no stranger to being in trade rumors, and with Bowen Byram proving that he’s ready for a full-time role next season, Girard could be the odd man out both from a roster spot and a financial perspective.

Of course, Jack Johnson is also an unrestricted free agent this summer, which could slot Girard back into the left side. However, the Avs are committed to Girard at $5 million annually through the 2026-27 season. Johnson is projected to fetch a one-year deal at $876,000 per Evolving Hockey. The 35-year-old played well in Jared Bednar’s system.

Girard, at 5-foot-10, 170 pounds, is the smallest of the three defensemen listed here, but he brings a ton of offensive upside. He logged over 21 minutes a night while recording 90 shot blocks during the regular season. Girard was limited to just seven games in the Stanley Cup Playoffs, but he still managed to put up a goal and two assists.

The former 47th overall pick in 2016 is also a factor on the power play. Girard recorded over 122 minutes TOI on the man advantage this past season but was at over 150 minutes TOI in his first three seasons with the Avalanche.

Again, it will ultimately come down to a combination of what Colorado wants to do with Johnson and how many free agents they can retain, but moving Girard could be a win-win for both the Avalanche and Kings organizations.

Here’s how the three stacked up against each other for the 2021-22 regular season:

As noted, the Kings might also have to get creative to address the left-shot defenseman they have been looking for for the better part of two years.