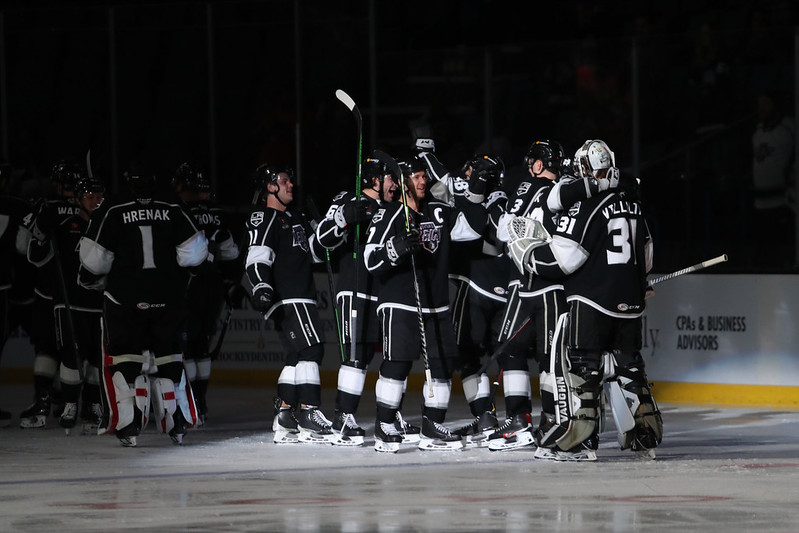 It took more than 60 minutes, but the Ontario Reign completed the sweep against the San Diego Gulls in a 3-2 overtime win.

Coming into game two, Akil Thomas had been red hot. In the last eight games of the regular season, he registered five goals, including a hat trick in a game against Colorado. Two weeks ago, I mentioned how it had been a rough year for Thomas after missing the start of the season recovering from offseason surgery. The Toronto native didn’t score his first goal of the season until late March. I also mentioned that if Thomas can keep up his play, he could add bottom-six scoring for the Ontario Reign.

After finding the back of the net twice in game one, Thomas continued to do so in game two. Just over four minutes into the opening frame, Thomas’ shot beat Gulls goaltender Lukas Dostal’s glove side to open the scoring. Thomas tallied three goals in the two games, giving the Reign scoring from the bottom-six forward group.

2. Special teams tie it up for the Gulls

In the second period, the Reign had multiple chances to extend their lead on the power play and could not do so. With 11:49 left in the second period, the Reign went on the power play after a tripping penalty was called on Gulls forward Lucas Elvenes. The Reign, who usually starts the first power-play unit at the beginning of a power play, started with the second unit. Christian Wolanin couldn’t hold the puck in at the blue line, leading to a breakaway for San Diego. After Matt Villalta stopped the original shot, Greg Printz poked home the rebound to cut the Reign’s lead in half, 2-1.

That wouldn’t be the last special-teams goal by San Diego. After a Vladimir Tkachev hooking penalty with 1:51 to go in the second, San Diego had a chance to tie the game going into intermission. After a couple of big saves by Villalta, Brent Gates Jr. put the puck in the back of the net with five seconds to go. The Reign couldn’t capitalize on their power play opportunities and gave up a short-handed goal while the Gulls took advantage of theirs in the middle period.

😳 With the seam pass from @Elvenes25 and that one-timer from Brent Gates Jr., we're tied!#LetsGoGulls | #FlightToTheCup pic.twitter.com/sVvJTEPJbt

3. T.J. Tynan wins the series for the Reign!

No team was able to get the go-ahead goal in the third, but the Reign had the better chances between the two teams. Tied after three periods, the game needed overtime to decide a winner. Just 2:05 into the overtime, Gulls forward Hunter Drew committed a tripping penalty. Ontario, the team with the best power play in the regular season and AHL history, had an opportunity to end the series.

Up to that point, the Reign was 0-for-4 on the power play, and at times it looked a little stagnant. Tynan, the big offseason signing in the summer, got a pass from Frederic Allard, skated to the top of the right circle, and fired a wrister that beat a screened Lukas Dostal. Usually the passer, Tynan ended up being the one who took the shot and won it for the Reign.

What a shot by TJ Tynan! pic.twitter.com/nFJBz7O9rS

UP NEXT: The Ontario Reign advanced to round two and will either play the Colorado Eagles or Bakersfield Condors. We’ll find out their opponent this weekend.