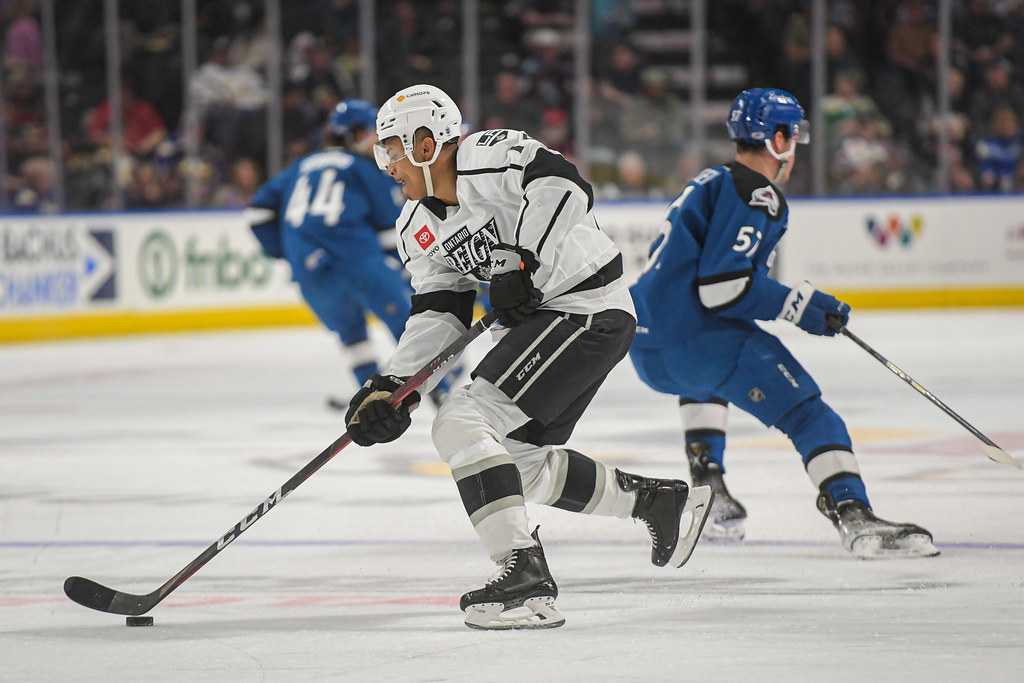 Akil Thomas and T.J. Tynan combined for eight points in a 5-3 Ontario Reign win against the Colorado Eagles Wednesday night.

Last night was T.J. Tynan’s first game at Colorado since joining the Ontario Reign last summer as a free agent. Midway through the first period, the Eagles gave Tynan a tribute video and got a nice ovation from the crowd. Tynan, who spent two seasons with the Colorado Eagles, won the Les Cunningham Award (AHL MVP) last season for Colorado and is on track to win it again this year as a member of the Ontario Reign.

Motivation or not, it seemed like T.J. Tynan might have had this game marked on his calendar. He started the scoring on the power play 1:56 into the game and tacked on 3 more assists later on as well. All four of his points came on the power play last night.

Here's Tynan in his old barn for the feels pic.twitter.com/6rsG1i7d72

With his four-point night, Tynan now has 96 points on the season. His three assists bumped him up to 82 on the year and well within striking distance of breaking George “Red” Sullivan’s record of 89 assists in one season. With three games left in the season, we all should be keeping a close eye on that. Only eight more assists to break the record.

Another Ontario Reign player had four points last night and that was Akil Thomas. I’d be lying to you if I said it’s been a challenging year for Thomas. Prior to the season, he had shoulder surgery in the offseason that kept him off the ice until December. After returning for two games he got injured again and was sidelined for another month before returning to action. It took him a while but he finally netted his first goal of the year in a game against the San Diego Gulls on March 26th.

Last night was his best game of the season. Thomas, in his second professional season, registered his second career hat trick. Two of his goals came while he was in front of the net and just had to bang home the rebound while his third and final goal of the contest came from the edge of the right circle.

Since getting off to his slow start, all of Thomas’ seven goals have come in his last eleven games, including two multi-goal games. It’s good to see him finally putting the puck in the net again.

Just three weeks ago when these two teams met in Ontario, the Colorado Eagles dominated the special teams battle, especially on the power play. The script flipped last night. Ontario went 4-for-7 on the power play on Wednesday with Thomas getting two of those goals. Entering the 3rd period the Ontario Reign got two power play goals to go ahead 5-3, a lead they wouldn’t relinquish.

What was more impressive was holding Colorado’s powerplay to 1-for-5 on the night. Before the Reign got their two power-play goals, Colorado had two power play opportunities of their own in the 3rd period but couldn’t convert. Credit to the Ontario Reign penalty kill because they took away the shooting and passing lanes and didn’t give Colorado a whole lot of chances on those two power play attempts. If the Reign is going to make a deep playoff push, they need to keep improving on the penalty kill.

After the Ontario Reign defeated the Colorado Eagles, they moved to within one point of the Stockton Heat for first place in the division. Just about 20 minutes later the Stockton Heat defeated the Tucson Roadrunners 3-1 to extend their standings lead on the Reign back to three points. Stockton’s magic number to clinch the first seed and a first-round bye in the division is now four points. If that happens, Ontario will end up in second place and have a date with their Southern California rivals San Diego Gulls in the first round. There are three games remaining and it should be an exciting finish.

UP NEXT: These two teams will meet again on Friday at 6:05 PM PT in Colorado.