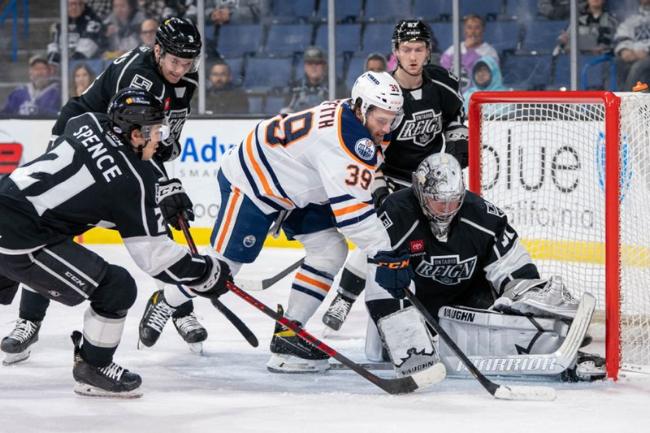 The Ontario Reign won their fifth straight game with a 3-2 victory against the Bakersfield Condors Monday night.

Special teams did not start out well for the Ontario Reign last night. They went 0-for-2 on their first two power-play opportunities and gave up an early power-play goal on the Condors’ first power-play attempt of the game. As the game went on the Reign began to win the special teams battle. Lias Andersson scored his 6th goal, a power-play goal, to bring the Reign within one. And, in Lias Andersson fashion, he pulled the between the legs move again. I still don’t know how he makes it look so easy. In the second period, Martin Frk scored on his signature slap shot from the left circle on the power-play for his 30th goal of the season on a great feed from Jordan Spence.

Who had @Frky91 to tie it on their Bingo card? pic.twitter.com/WHzZhK08qp

Late in the game, Ontario did a good job to kill off two power-play opportunities by the Condors to protect their 3-2 lead. The last penalty kill by the Reign came with 48 seconds left in the game. With the Condors having a 6-on-4 advantage for the final 48 seconds, goaltender Matthew Villalta came up big for the Reign as Bakersfield was throwing pucks towards the net and scrambling to tie it before time expired. It’s not how you start, it’s how you finish.

You didn’t think I was going to not say anything about T.J. Tynan, did you? Entering last night’s game, his 500th career professional game, T.J. Tynan had 59 assists for the season. Tynan added two assists during the game and now has 61 helpers on the season with 19 games remaining. Both of Jordan Spence (who also is putting up insane numbers) and Tynan’s assists came on the power-play.

Remember, George “Red” Sullivan’s record of assists in a season is 89 and that was done in the 1953-1954 season. With 19 games left and 29 assists from breaking the record, do you think Tynan breaks the record by the season’s end?

The Ontario Reign has had a knack for scoring and rallying in the third period. Including last night, Ontario has scored seven goals during this homestand. Last night was their second third-period comeback during that stretch with the other one coming against the Tucson Roadrunners last week. After Frk’s 30th goal of the year, Samuel Fagemo scored 21 seconds later off a beautiful backhand shot, beating Condors’ goalie Ilya Konovalov on the blocker side for the game-winner. It’s great to know that if the Reign are trailing at any point of the game as we’ve seen lately, they are never out of it and have the ability to come back.

Come on @samuelfagemo give us sometime to type next time. pic.twitter.com/mDvOGfeVkG

The Reign will end their five-game homestand Wednesday as the San Jose Barracuda come into town. That will be a 7:00 pm start.