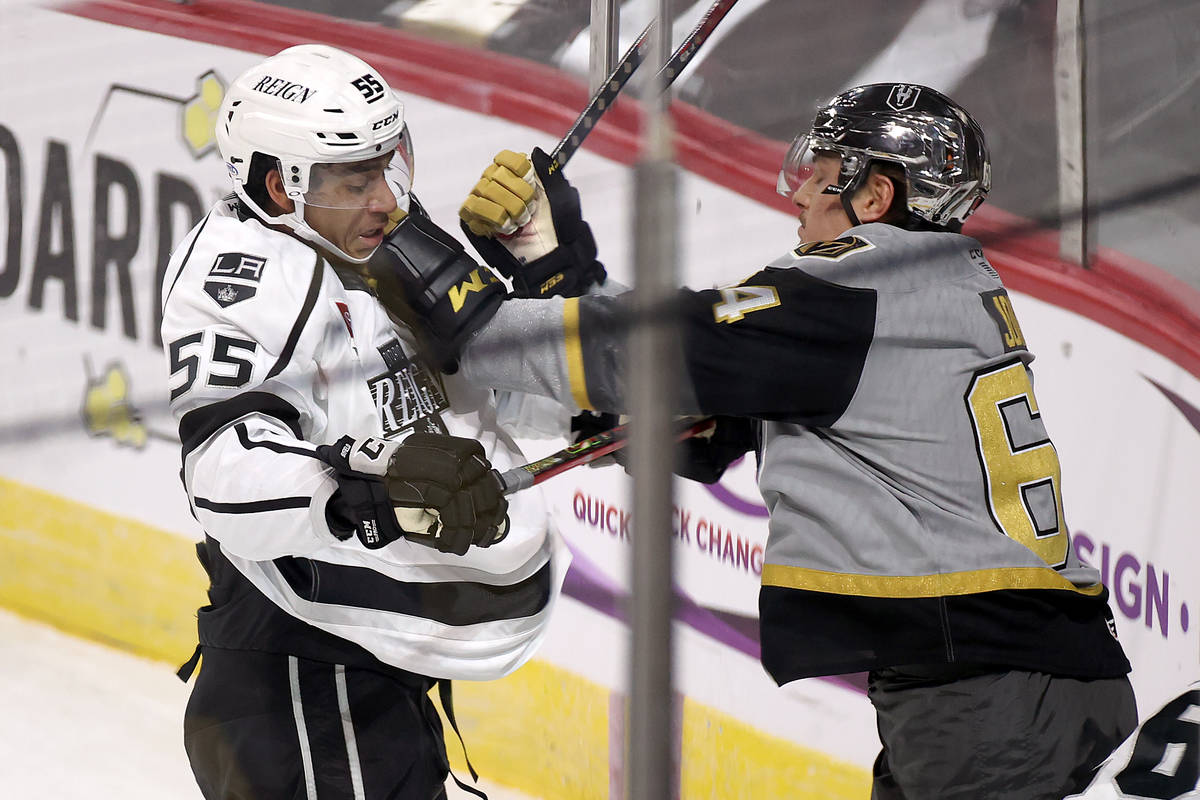 The Ontario Reign wraps up their five-game homestand with their third game of the season against the Henderson Silver Knights on Friday.

It’s been five days since the Ontario Reign last played, a 5-4 overtime loss to the Stockton Heat, but they will be back in action on Friday against the Henderson Silver Knights.

The two teams have split the pair of games they’ve played against each other this season, with Ontario winning 5-2 back on November 3rd while Henderson won most recently, 4-1 on New Year’s Eve.

Henderson also played Stockton in their last game. They picked up a 5-2 win and have points in eight of their last nine games.

Five of Ontario’s last six games have gone to overtime.

Here are three things to watch for on Friday:

There were three transactions on Friday that sent Jaret Anderson-Dolan and Samuel Fagemo up to the Los Angeles Kings. Another forward, Martin Frk, is unavailable as well as he is in the NHL’s COVID protocol. Those three forwards are three of the top four goal scorers on the Reign. Also, Vladimir Tkachev did not play in Ontario’s most recent outing.

On the blueline, Christian Wolanin was activated from the NHL’s COVID protocol and assigned to Ontario.

It’s also worth noting that goaltender Jacob Ingham was added to the Reign. With Garret Sparks going down in his last appearance, Ingham joins Lukas Parik and Matt Villalta, who was dressed as a backup on Sunday, as available goaltenders.

In each of Ontario’s and Henderson’s last ten games, only twice have they scored less than three goals. Henderson has scored five goals in two of their last three games while the Reign have combined for nine goals-for in their last two.

These are also the top two teams in the Western Conference in shooting percentage, with Ontario’s 13.05% and Henderson’s 11.73%, well above the league average of 10.11.

As noted above, however, the Reign are expected to be without some of their top producers, so it could be a game where we see Ontario slow things down a bit more.

Despite their recent run of goal scoring, Henderson is better known for keeping pucks out of the net. They have given up the third-fewest goals in the league and their 2.56 goals-against per game is also among the best in the AHL.

Goaltender Logan Thompson‘s .931 save percentage is tied for second-best in the league. He has seen the bulk of the action for Henderson, appearing in 20 games. Backup Dylan Ferguson has played in just six. However, with a back-to-back, it’s likely the Reign will see both of them.

While credit should be given to the goaltending, the team’s play in front of them hasn’t hurt. Thompson and Ferguson have had the luxury of some of the easiest work among AHL goaltenders (per Sean O’Brien):

Puck drop is scheduled for 7 p.m. PT and can be seen on AHLTV.