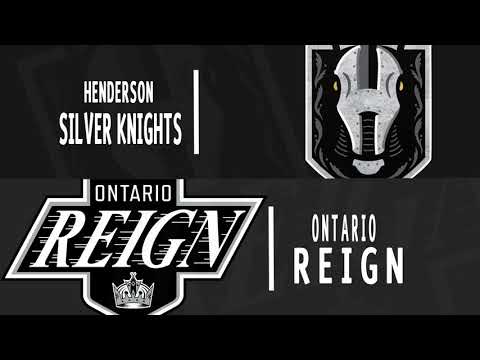 The Ontario Reign ended their five-game homestand with a 5-2 win over the Henderson Silver Knights on Friday.

A pair of power-play goals and a strong performance by Matt Villalta in his return to action lead the Ontario Reign over the Henderson Silver Knights.

Tyler Madden got the Reign on the board less than five minutes into the game with his second power-play goal of the season. Positioned in his usual bumper position in the slot, he finished a pretty passing play by T.J. Tynan and Quinton Byfield:

The voice of the Reign @JoshSchaefer25 said it best Tic-Tac-Toe pic.twitter.com/hsT5m39mZq

The goal gives Madden tally’s in back-to-back games, and Byfield now has points in four straight.

Tynan had two assists on the night and was named the game’s first star. He is now tied for the league lead in assists with 27.

A defenseman by trade, the Norweigian born Kasastul was asked to play forward on Friday due to the lack of available options to the Reign.

Pavel Dorofeyev got the Silver Knights on the board less than a minute after Kasastul’s goal.

In the second, the Reign controlled the bulk of the play, outshooting Henderson 15-8. The hosts picked up goals from Brett Sutter and Gabriel Vilardi, with Vilardi’s coming with the man advantage.

Henderson came with a push in the third period, outshooting Ontario 10-3 but was not able to cut into the Reign lead. Just past the midway point, Aidan Dudas put the game out of reach with a nice individual effort.

Here are three things that stood out on Friday:

It has been a problem all season for Ontario when they’ve been short-handed. On Friday, however, they played the entire game a man-down, dressing 17 skaters:

Austin Wagner returned to the lineup, but Ontario was forced to play Kasastul as a forward with so many players unavailable.

On the back-end, Christian Wolanin was also inserted back into the lineup while Marcus McIvor played in just his second career AHL game and first for Ontario. Wouldn’t you know it, he and Kasastul would connect on the latter’s first goal of the season. Nikita Pavlychev would also pick up his first point for the Reign with an assist on the goal.

All in all, an impressive effort from the Reign.

Playing in his first game since December 29th, Matt Villalta was strong when called upon against Henderson. He made 25 saves on 27 shots to record his 11th win of the season.

The lone goal he gave up was on a wide-open shot from the slot that beat him up high over the glove side shoulder:

He came up big early in the second as right after Sutter’s goal put the Reign up by two, Villalta stopped Ben Jones on a breakaway to keep Ontario’s two-goal lead.

A performance like this should feel good for Villalta. He had given up four goals in each of his previous three outings, and this is the first game since December 10th that the Kingston, ON native has given up less than two goals.

Despite the number of players up and down between Los Angeles and Ontario and in and out of the Reign lineup, this trio stayed together and was excellent again.

The three talented forwards combined for 3 points and nine shots on goal in the game.

Vilardi has been red-hot, picking up points in four straight games, and has eight points in his last six games. He’s been playing the left-circle on the power-play in Martin Frk‘s absence and made it count on Friday:

This power-play goal by @Gabe_Vilardi13 can really only be described as a Frk Bomb which feels so wrong but so right all at the same time pic.twitter.com/16AKEneTjM

With how well they’re playing, it’s hard to imagine this line being split up anytime soon.

The two teams will run it back on Saturday at 7 p.m. PT in Henderson. The game can be seen on AHLTV.