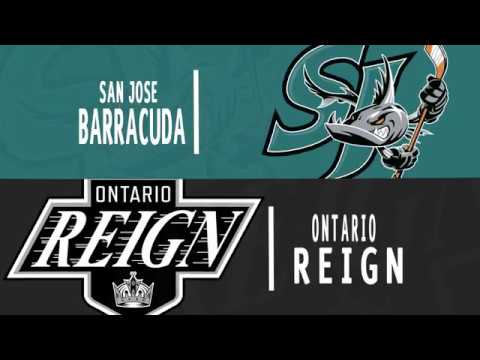 The Ontario Reign return home to Toyota Arena for games on Friday and Saturday. Up first is a meeting with the San Jose Barracuda.

After five days off, the Ontario Reign are back in action against the San Jose Barracuda. It’ll be the first time the two teams have met in the 2021-22 season after their first meeting was postponed.

Ontario sits in second place in the Pacific Division at 13-5-0-1 while the San Jose Barracuda are last in the Pacific with a record of 8-11-1-0, despite being winners of two in a row. The most recent of those two wins was quite the high-scoring affair as they beat the Colorado Eagles 10-5.

In addition to having the third-worst winning percentage in the AHL, the Barracuda has allowed the most goals against in the league as well. It’ll be an opportunity for the high-powered Reign offense to put some pucks in the net at Toyota Arena.

Here are four things to watch for on Friday:

After not playing since last Saturday, December 11th, this will be the fifth time already this season where the Reign have played a game coming off at least a five-day break. This season, they have been hit with a few game cancellations due to ice rink issues in Ontario and Covid protocol in Bakersfield.

The extended breaks haven’t seemed to affect the Reign one way or the other as they are 2-2 in these games, the most recent being their 4-2 win over the San Diego Gulls one week ago. They’ve outshot their opponents in three of those four games.

It is surely less than ideal for the likes of Quinton Byfield and Akil Thomas, two players who only recently made their season debuts and are forced to sit again. Thomas did miss the last game due to an injury, and his status is uncertain for Friday.

While no team goes into games wanting to take penalties, that couldn’t be more true in this one. Friday will feature two of the AHL’s best power-plays, with the Barracuda 2nd and the Reign 3rd in power-play percentage. While a man-down, however, the two teams anchor the bottom at 31st and 30th respectively in penalty-kill percentage.

Reedy leads San Jose with six goals with the man advantage while he and Joachim Blichfeld each have 10 points on the power-play.

The Barracuda may not be good at keeping pucks out of the net when they are short-handed, but they have been somewhat dangerous at scoring short-handed goals. They’ve got three on the season.

Frk continues to pace the Reign with the man advantage, leading the team in goals (4) and points (9). Those four power-play goals are tied with Jaret Anderson-Dolan, who is back with the Ontario Reign after a short stint in Los Angeles.

Friday will be the fourth game of the season for the embattled Evander Kane in the AHL. In his first three games, he has a goal and four assists – with four of those points coming on Wednesday against Colorado:

Kane is playing 20-plus minutes each night for the Barracuda.

I spoke with head coach Roy Sommer this week, and he has been happy with Kane (even before tonight). Roy is not easily impressed.#AHL pic.twitter.com/D6RlkKvgkJ

After being suspended 21-games for violating the league’s Covid-19 protocol, Kane was put on waivers by the San Jose Sharks. Despite his share of off-ice issues, the 30-year-old Vancouver native is a talented player and will give the Ontario defense something to keep an eye on.

Speaking of the Ontario Reign defense, it will be a different look on the back-end this weekend. After the injury to Alexander Edler, the Kings called up Christian Wolanin, while Helge Grans is off to Canada for the World Junior Championships with Team Sweden.

In addition, Drew Doughty is in COVID protocol, making it likely that another defenseman will be called up to the Kings. One of those that would be considered is Austin Strand, but he is also in COVID protocol.:

With Doughty out … what's the next move?
Defenseman Austin Strand of the Reign would have been the obvious call-up but he is also in COVID protocol, per Ontario.

Jacob Moverare would seem to be the readiest of the bunch to get the call, so we’ll see what the Kings decide to do. LA does not play on Friday, but they have back-to-back games over the weekend in Carolina and Washington.

In the interim – yet prior to the Doughty and Strand news – they signed right-shot defenseman Blake Siebenaler to a PTO:

Originally drafted by the Columbus Blue Jackets in 2014, Siebenaler will be in his third loan-stint in the AHL this season. He’s played six games between Henderson and Belleville and has not registered a point. In eight games for his home town Fort Wayne Komets in the ECHL, he has three goals and seven points.

Another player that is on loan with the Reign is Christian Kasastul. The left-shot Norweigian defenseman could make his AHL debut this weekend. He has one assist in seven games this season with the ECHL’s Greenville Swamp Rabbits.

Puck drop is scheduled for 7 p.m. PT on Friday and can be seen on AHLTV.