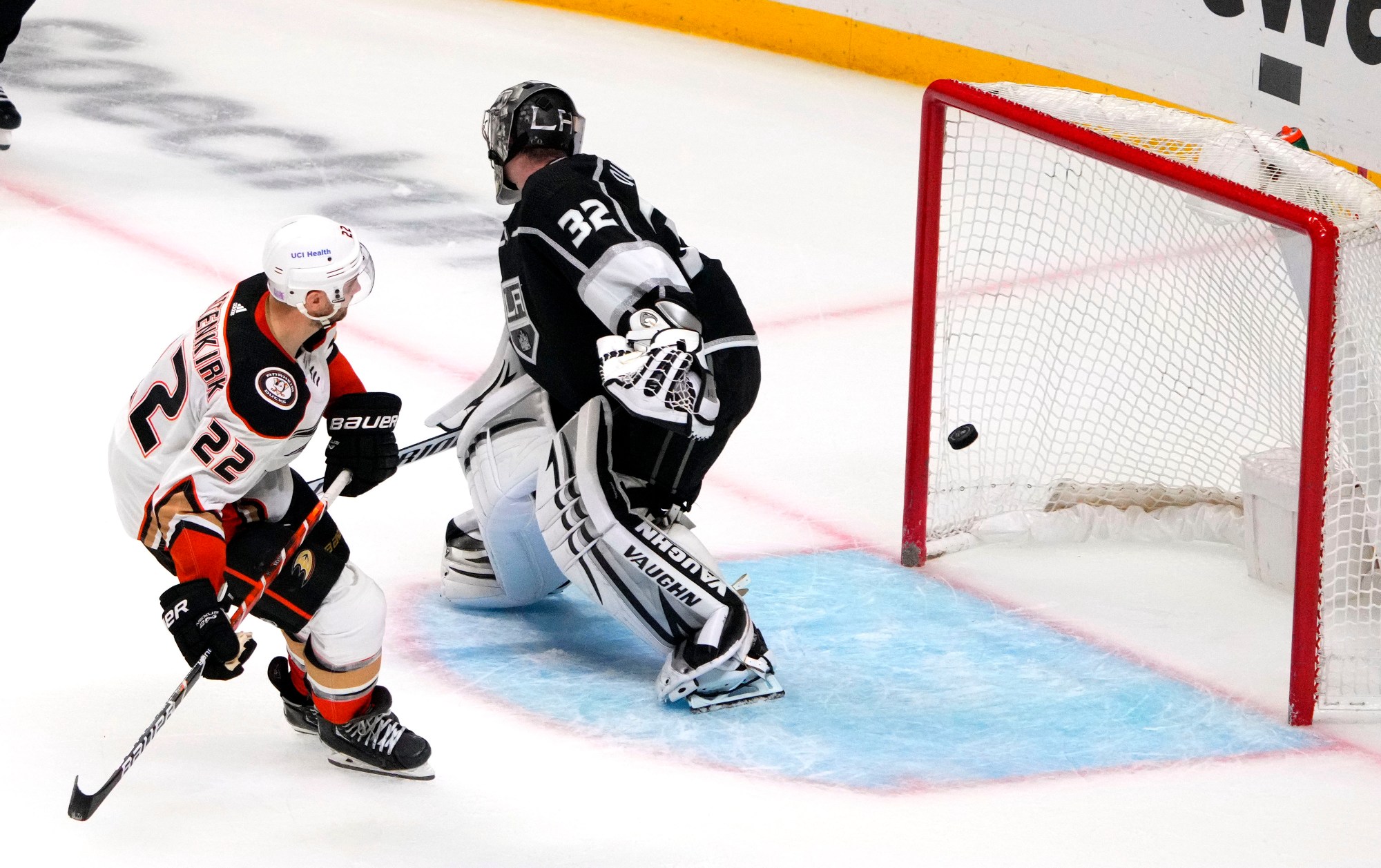 The LA Kings met their Southern California rival for the first time this season on Tuesday night at the Staples Center.

The Anaheim Ducks are considered by many to be the LA Kings‘ biggest rival, and that rivalry was on full display Tuesday night.

It would be the Kings who would come out of the gate quickly in the first period, controlling possession and shots on goal – totaling 18 to 8 for the Ducks in the opening frame. As has happened for most of the season, Zero “the unable to score” ghost haunted the Kings once again and the period ended in a scoreless tie.

The second period was the exact opposite of the first. This time it was the Ducks who dominated play, including outshooting the Kings 16 to 6. Unlike the first period, there was some scoring. Anaheim got two past LA starting goaltender Jonathan Quick off of Kings turnovers in their own end.

Alex Iafallo got one for Los Angeles in between the Anaheim goals when his shot from the front of the net went off of Jamie Drysdale‘s skate and in. The teams went into the second intermission with the Ducks leading 2-1.

Alex Iafallo nets his 7th of the season! #GoKingsGo pic.twitter.com/YSqkHn0ubM

The third period was, simply put, wild. It looked like Anaheim was going to run away with the game early in the period as they got two goals within the first three minutes. Four minutes later, Adrian Kempe redirected a Matt Roy shot from the point past Anaheim goaltender John Gibson to get the Kings within two goals.

Seconds after that, Los Angeles they had their third goal of the night, but it was disallowed after it was determined Carl Grundstrom had touched the puck with a high stick – at least that’s the simple interpretation of what happened. Grundstrom played the game on the fourth line in place of the suspended Brendan Lemieux.

This would not deter the LA Kings, as they continued to chip away the stone, so to speak. With just under five minutes left in the period, Alex Iafallo redirected a Drew Doughty shot past Gibson that would no doubt stand, making the score 4-3.

Twenty-six seconds later, with the Kings applying more offensive pressure, Dustin Brown was able to corral his own rebound and went top shelf to tie the game at four. What looked like a blowout was now a game that was going to overtime.

WE ARE NOT OKAY.

The five-minute overtime would not solve anything, although both teams had chances. Kempe missed on a partial breakaway, and Cam Fowler nearly won it for the Ducks with a backhand shot that went off the far post. In the shootout, the Ducks got goals from Trevor Zegras and Kevin Shattenkirk as opposed to just one from the Kings by Lias Andersson to win the game and take the extra point in the standings with the 5-4 shootout victory.

Without further adieu, here are the three takeaways from tonight’s contest.

After missing sixteen games, Drew Doughty made his long-awaited (and ahead of schedule) return to the LA Kings lineup. If anyone thought he was going to be eased back into the lineup, they were sorely mistaken. Doughty played nearly 28 minutes and looked like he hadn’t missed even one game. He posted an impressive one assist, three shots, two hits, two blocks, and was a +1 in his return.

Takeaway #2: Sean Durzi could be just what the doctor ordered

It’s no secret the Kings are looking for a young, dynamic, offensive-minded left defenseman. Granted, it’s a small sample size, and he plays on the right side, but Sean Durzi has been excellent since making his NHL debut nearly a week ago. Tonight, he had one assist to go with two shots on goal and three blocks and has at least one point in each of the three games he has played for the Kings.

Most importantly, he looks comfortable playing at the NHL level. Having options is always good for a team.

Takeaway #3: The Kings have to cure their Western Conference doldrums

So far this season, LA has played eleven games against Western Conference opponents – and have lost nine of them. In all fairness, they have played only two games against Pacific Division rivals, losing tonight to Anaheim and defeating Vegas on opening night.

If the Kings are going to be a playoff contender, they will need every point they can get and cannot continue to give points to teams they may well be battling for a playoff spot come April.

Todd McLellan thought the Grundstrom goal should’ve counted. Said he saw Shattenkirk control the puck before it went in.

“We don’t always have to agree with the calls, but we have to accept them.”#GoKingsGo

The Kings will wrap up their seven-game homestand against the Calgary Flames on Thursday – the first game of a daunting December schedule:

A daunting December schedule will make or break these LA Kings