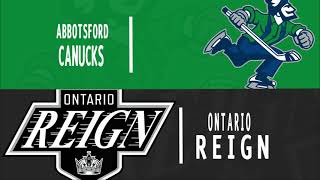 In their first game in over a week, the Ontario Reign couldn’t build on an early first-period lead, falling 3-2 to the Abbotsford Canucks.

It didn’t take long for the Ontario Reign to get on the board in this one, but that lead wouldn’t last, and the Reign would drop their third game in the last five 3-2 to the Abbotsford Canucks.

It’s just the third regulation loss of the season for the Reign as they fell to 11-3-0-1 while Abbotsford picked up their fifth win of the season, improving to 5-6-2-1.

Matt Villalta stopped 23 of 26 shots in the loss, while Michael Dipietro made 21 saves in the win.

A little bit of a different look from head coach John Wroblewski as the duo of T.J. Tynan and Martin Frk was split up:

The tweak to the line worked right away as just 63 seconds into the game, the Gabriel Vilardi – Tynan – Adam Johnson trio struck:

Adam Johnson makes it 1-0 #Reign with his 1st goal of the season!

A little over six minutes later, the hosts would tie things up as Nic Petan put home a rebound on a shot from Vincent Arseneau:

It was another slow-go in the first period for the Reign as they were outshot 12-4 in the opening 20 minutes.

Ontario had a couple of power-play opportunities early in the second period but didn’t take advantage. Abbotsford’s Phil Di Giuseppe would break the tie at the 12:11 mark of the middle frame with this beauty on a breakaway:

HE DIDN'T JUST DO THAT!

A beautiful pass by Sheldon Rempal finds Phil Di Giuseppe, who buries it between the legs for the @Panago_Pizza delivery of the game!#AbbyCanucks pic.twitter.com/SzNRN08F14

Abbotsford would control the second half of the period and extended their lead with a Sheldon Rempal power-play goal, beating Villalta to the short side.

Alex Turcotte would bring Ontario within one 13:13 into the third period:

Turcotte makes it a 1 goal game with his 4th goal of the season!

Despite a couple of good looks with the goalie pulled, the Reign would not be able to find the equalizer.

After the first period, Ontario was the better team: