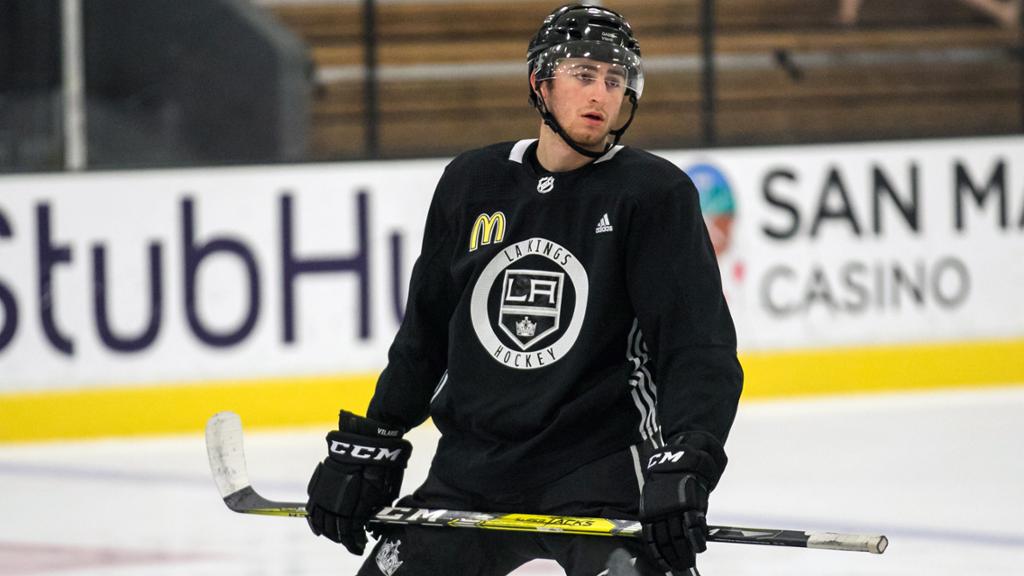 Gabe Vilardi came to LA Kings training camp penciled into the third line center position. But as his game started to falter, Rasmus Kupari’s game has elevated. A few games later, Vilardi ended up being a healthy scratch and then soon after entered COVID protocol.

The question is, with Quinton Byfield set to return in the coming weeks, where does that leave Gabe Vilardi? In all likelihood, when Byfield returns, he will be assigned to the Ontario Reign.

Now, It has been known for some time now that the Kings loaded prospect pool was full of centermen, and someone would eventually have to transfer to the wing.

General Manager Rob Blake even recognized this inevitability recently when he said, “I’ve seen centermen go to the wings, I rarely see a winger go to the center. So there is no reason any of these centermen can’t go to the wing and find the right position.”

So transferring someone to the wing has obviously been part of the plan all along. The Kings originally tried switching Kupari to the wing, but it soon became obvious that he belonged up the middle with his skating and faceoff numbers.

On the other hand, Vilardi looks like the prime candidate for a smooth transition to the wing. And what a better way to learn a new position than with the Reign, one of the best teams in the American Hockey League. Youngsters on the Reign have the team off to an impressive start by leading the Pacific Division with a 9-0-0-1 record. It seems like the perfect place for Vilardi to grow into a new role as a winger.

So far in his NHL career, Vilardi has struggled in certain areas, including skating ability, playing a 200-foot game, and faceoffs. If he moves to the wing, a lot of those responsibilities will no longer be his, and he can then be free to use his skill without worrying about all of the tasks assigned to a centerman. Vilardi is a crafty player with high-end skill and a solid hockey IQ which may make the Kings hesitant to include him in any future trades.

The wing looks like a good fit for Vilardi, and when he gets called back up, he could easily transition into a bottom-six winger role alongside either Byfield (when he is healthy) or Kupari. This might just solidify his place on the Kings’ roster going forward. So, if Vilardi moves to the wing, it makes sense for the organization now and in the future.