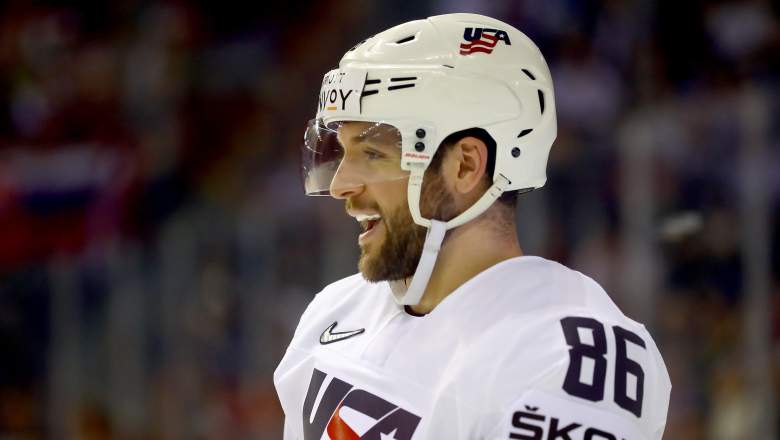 In the conclusion of my interview with Craig Wolanin, we speak about the former NHL defenseman’s son, current NHL blueliner, Christian.

As we concluded Part 1 of our interview, former NHL defenseman Craig Wolanin spoke about his son, Christian, being a late bloomer. Yet, since he was traded to the LA Kings this past March, Christian has worked hard to earn his colors, in a manner of speaking, for his new club. He even made the most of an exciting opportunity, representing Team USA at June’s World Championships in Riga, Latvia.

In 2015, though, Christian Wolanin entered the NHL Draft in what was the final year of his draft eligibility. So, while most players get drafted at 18 or 19, the second-generation NHLer was 20 when his name was finally called, being taken in the fourth round (107th overall) by the Ottawa Senators. Nevertheless, it was a moment that filled the youngster’s father with enormous pride.

“I was happy for him because it’s something that I know he wanted,” beamed Craig. “He has always been a late developer, and his commitment to college came in his third year [in the USHL], which is not necessarily the normal way to juniors. That usually comes a bit earlier. He was drafted as a 20-year-old. That is late. I believe that was his last year of draft eligibility. So, he’s always been a bit late, or delayed, in development.”

In Part 1, we addressed Christian’s unparallel work ethic. This was just as evident in 2015.

“The thing about [Christian] being drafted is that he’s doing all the work, and I think sometimes when you get drafted, that kind of validates some of the work that you put in and it provides hope for you, and I think that’s what him being drafted did,” Craig elaborated. “It gave him some hope and some understanding that he is on the right path and that the work that he had put into that point had been validated.”

As for being traded to the Kings earlier this year, the experience added a new element to Christian’s continued education, so to speak.

“When Christian got traded to the Kings, that was another part of his learning experience,” Craig recalled. “There was an opportunity to become a free agent out of college because of where he was drafted and when he was drafted, and he chose to sign with Ottawa because he felt a loyalty to their program because they’re the ones that took a chance on him, drafting him. Then when he got traded to the Kings, he started to understand the business aspect of the National Hockey League.”

While he may have benefitted from some good coaches with the Senators organization, there was one coach in particular — another former NHL blueliner — who instilled in him a new sense of confidence upon his arrival to the City of Angels.

“Not that it was an eye-opener because his eyes had been open numerous times along the way, but I think with the King organization and specifically [Kings’ assistant coach] Trent Yawney, I think he has an opportunity that he hadn’t had in Ottawa,” Craig explained. “He has an opportunity to be coached by a player that played [defense] in the league for a number of years and, from what I know of Trent, he’s a good communicator, and Christian has a lot of respect for him. But, I think he has a good opportunity [in Los Angeles] to really expedite that learning curve as we talked about earlier.”

While his acquisition from Ottawa may not have sent shockwaves through the NHL, Christian Wolanin’s arrival to southern California nonetheless helped both the Kings and the AHL’s Ontario Reign in the short term. For the Reign, the blueliner collected three assists in just two games and played in another three for the Kings. Of course, while he hadn’t recorded any points with the big club, Wolanin registered four blocked shots, one takeaway, and no giveaways. A small window, granted, but a promising one for the 26-year-old nonetheless. However, given how deep the Kings’ defensive corps is — especially with the addition of veteran Alex Edler — cracking the big club’s roster will prove challenging for Wolanin.

Along with Kings teammates Trevor Moore and Cal Petersen, Wolanin flew to Latvia in May to represent Team USA at the 2021 Worlds, using his aforementioned work ethic to earn a spot with the club. But, it was also the blueliner’s initiative to reach out that helped him don the red, white, and blue.

“In regards to his experience with Team USA in Latvia, I’m very proud of him for that,” beamed the Wolanin patriarch. “Number one, he initiated that conversation with the US team. Because of COVID, he was presented an opportunity that may not have been there had it been a normal season. He understood where he was in the pecking order, yet he went there and proved that he could be a contributing player, and he really enjoyed the team experience in Latvia because, like him, it was a number of players that were anxious to prove that they can play. For that reason, I think they had some great team success over there, and he looks back on that experience very fondly as I think many of the players and personnel do.”

But, Christian wasn’t content just to make the team. Instead, he made the best of the rare opportunity by scoring a goal and five assists in 10 games, helping Team USA earn the bronze medal. Yet, while his solid work ethic and sheer desire to succeed were both instrumental factors in Wolanin’s showing in Latvia, it didn’t hurt that he was coached by someone he was already familiar with.

“He really likes [Team USA Worlds coach] Jack Capuano because he was his defense coach in Ottawa, and I think they developed some kind of a rapport there,” Craig noted. “So, to be able to play for Jack again, I thought, was kind of cool, as well, in a different circumstance.”

It’s unclear just how much of Christian Wolanin we will see in Los Angeles this season. In fairness, that is a testament to the depth that the Kings already have on the back-end and in no way a detriment to Wolanin or his game. Regardless, the former Ottawa Senator will have plenty of ice time in southern California as he is expected to be, at worst, a reliable veteran in Ontario, helping the younger core adapt to the professional ranks while adding some points of his own along the way.

For the Wolanin patriarch, though, his son doesn’t have to do more to make him proud.

Christian’s road to the professional ranks may have contrasted that of Craig’s, but the younger Wolanin used his tireless work ethic to push himself — and to will himself — into a dream career. As for Craig, while he never pressured Christian to follow in his footsteps, his son made his own path to the pros anyway. But, because he wasn’t the most prolific goal-scorer or the most noteworthy playmaker, Christian knew how much harder he had to work to get where he wanted to be, and that is something that both he and his father can take with themselves for the rest of their lives.

So, whether he spends the majority of his time this coming season in Los Angeles or Ontario, keep an eye out for Christian Wolanin, and you will see just how much of an asset he can really be.