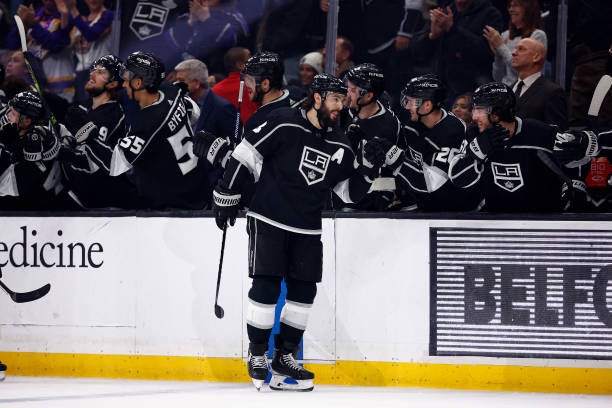 The LA Kings completed their season sweep over their state rivals, the San Jose Sharks, with a 4-3 win on Wednesday night.

Quinton Byfield scores his first of the year

It took a while, but Quinton Byfield finally netted his first goal of the season. Since being moved to the wing on Anze Kopitar’s line, Byfield’s game has improved. He’s been in on the forecheck, backchecking, stick checking, creating several turnovers, and didn’t have much to show for it the last several games. However, Byfield recorded two points last night. Byfield’s assist on Kempe’s goal showed great drive down the wing, good puck protection skating behind the net, and good vision to feed Kempe in front.

After getting an assist in the first period, Byfield would tally his first goal of the season in the middle frame. What I loved about Byfield’s goal is after the puck went to the blue line, he immediately goes to the low slot area and re-directs Mikey Anderson’s shot. It was the third multi-point game of his career.

gonna credit Will Ferrell with an assist on this one pic.twitter.com/oFmGtXEdG4

I don’t think Byfield playing the wing will be a permanent role, but he should stay there for now. It’s great to see Byfield get rewarded for his play over the last several games and let’s hope he keeps it up.

Too close for comfort

While the final score says it was a 4-3 LA Kings win, it got a little too close in the end. After Doughty’s goal put the Kings up 4-2 with 6:27 left, I got the sense of the Kings letting up just a bit and it allowed San Jose to creep back into the game with Hertl getting a late goal with 2:06 remaining to make it 4-3. The Sharks continued their late push but the Kings survived and skated away with another two big points.

If it wasn’t for James Reimer being a brick wall in the first period, this game isn’t close in the end. However, never take your foot off the gas pedal late in the game. That is today’s lesson of the day.

We are just past the halfway point of the season, which means we start to look at the standings. After Wednesday’s win, the Kings are now tied for first in the Pacific division with the Vegas Golden Knights. Both teams have 56 points, but due to the Knights having played three fewer games than the Kings, they own the tiebreaker because of the points percentage. Also, the Seattle Kraken keeps on winning as well. They have won six straight and are only four points behind the Kings with five games in hand. It should be a fun exciting second half of the season.

UP NEXT: The LA Kings are back in action at Crypto.com arena Saturday night as the New Jersey Devils come to town. The game starts at 7:30 PM PT and can be seen on Bally Sports West. It is Dodgers night at the game as well.