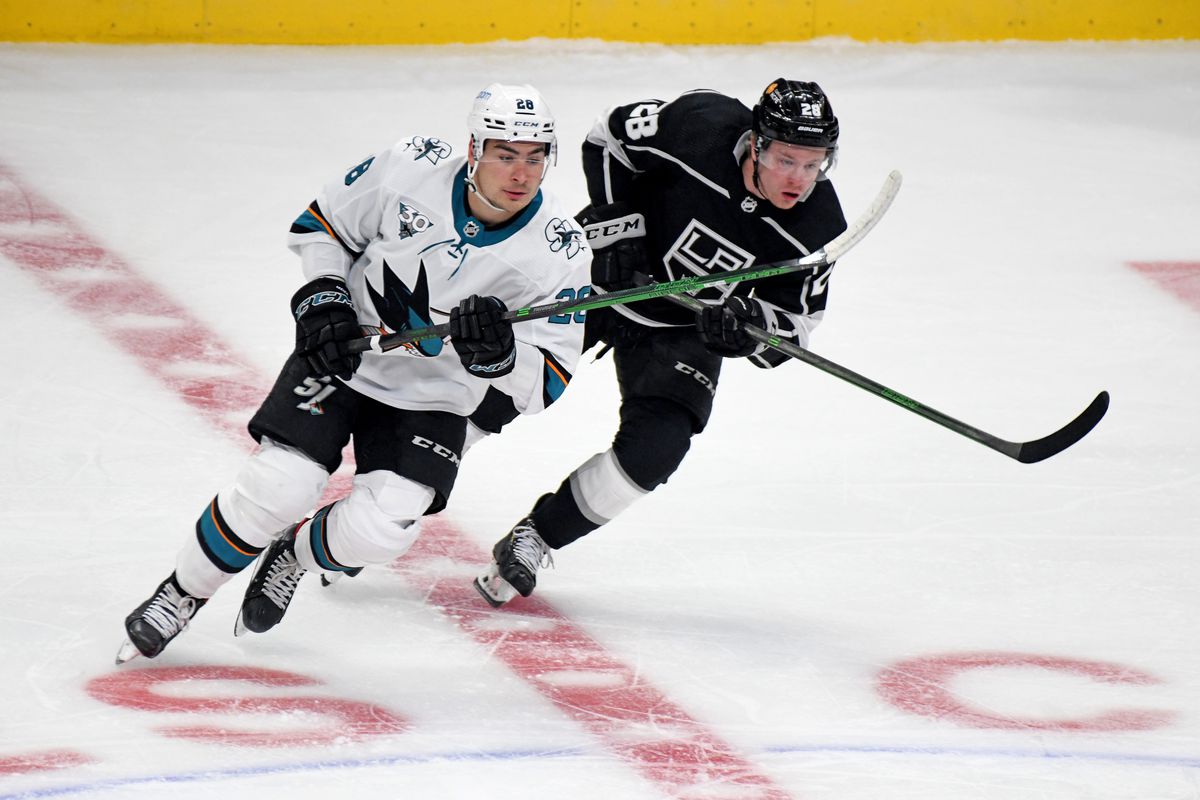 Losers of three straight, the LA Kings play their first post-Thanksgiving game in San Jose against the Sharks on Friday.

Here’s how the Kings lined up in their loss to the Rangers on Tuesday:

For Friday, I think we could see a couple of changes. First, Sean Durzi skated during practice on Thursday alongside Matt Roy; that pair could be reunited. If that happens, I suspect Alex Edler would slot in next to Sean Walker, leaving Jacob Moverare as the odd man out.

In goal, I’d say Jonathan Quick is a safe bet to get the start.

Here is how the Sharks skated in Wednesday’s 8-5 loss in Seattle:

Identical lines for #SJSharks tonight, except Dell backs up pic.twitter.com/wnyRA0KxzO

It’ll be the first meeting of the season between the California rivals. Timo Meier, who has 12 goals in 26 career games against the Kings, is coming off a hat trick on Wednesday.

Meanwhile, Erik Karlsson is having an incredible season, as he’s up to 30 points already on the season.

Not too surprisingly, the LA Kings have been the better possession team at 5-on-5 this season. Though, I think San Jose being much closer to an average team in that department is, in fact, a surprise. At least to me.

San Jose’s power play is middle of the pack in the NHL right now at 21.1%. Karlsson and Logan Couture are tied for the team lead in points with the man advantage (7), while Meier’s five goals lead in that department.

*Note: the odds below are for sports books offered in New York. Refer to available sports books specific to your state.
**Odds as of 9 am ET/6 am PT may have changed since this was published.

The Kings are the better team and should be favored; indeed, they are. BetRivers has the best price on LA at -143, while FanDuel’s +130 is the best number on the Sharks.

Personally, I’m not touching the Kings here. I agree they should be favored, but I cannot trust their inconsistent play and poor goaltending to lay -143 on the road.

Kevin Fiala’s move back to the top line paid instant dividends. The trio combined for five points at Even Strength. They should be able to spend plenty of time in the San Jose zone, and I like Adrian Kempe Over 2.5 shots on goal (-160).

Looking further down the lineup, Blake Lizotte has quietly put together a nice season; he is +550 to score in San Jose. Also, Arthur Kaliyev has gone without a goal in four straight games; I like his chances to score on Friday at +340.

A couple of Sharks with good numbers against the Kings historically are Timo Meier (18 points in 26 games) and Logan Couture (38 points in 54 games). They are -230 and -170, respectively, to register a point on Friday.

Erik Karlsson’s 19 assists are the fourth-highest in the league and tops among all defensemen in the NHL. He is -130 to pick up another apple against LA.

Perhaps somewhat lost in the Karlsson hot start, and Meier’s continued consistent scoring is the strong start for Tomas Hertl. He has 20 points in 22 games and is -190 to pick up another point on Friday.