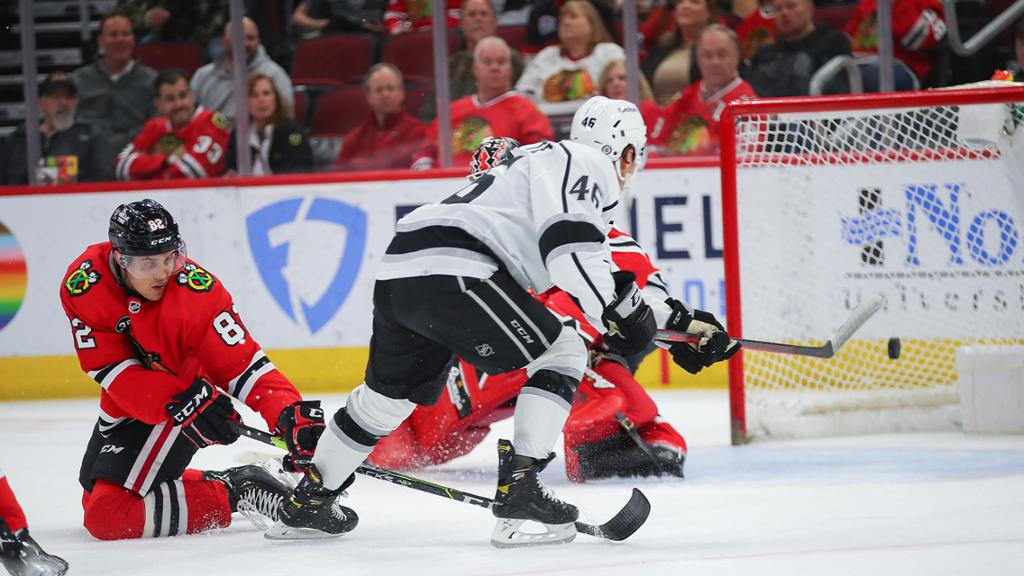 The LA Kings will look to avenge their overtime loss in Chicago last Thursday as the Blackhawks come to Crypto.com Arena.

Here is how the Kings lined up in Tuesday’s win against Minnesota:

Back-to-back wins and points in three straight. I don’t know that we see any changes. A couple of possible notes, though. Brendan Lemieux took a bad penalty in the dying seconds of the second period. Perhaps we will see Jaret Anderson-Dolan get another look on Thursday. And the elephant in the room, Brandt Clarke, is still sitting at nine games. It sure looks like he’s staying. Now, we’ll see if he starts playing. He could draw in for Sean Walker.

In goal, it doesn’t get much easier of a decision. A shutout for Quick on Tuesday seems like a no-brainer that he’ll be back in against Chicago as the Kings look to find some consistency.

This was the lineup Chicago used in their last game, a 4-0 loss to Winnipeg on Saturday:

Keep an eye on the morning skate to see if there will be any changes to the forwards or the defense, but it seems likely that Petr Mrazek will be back in goal for Chicago. The Czech netminder was activated off the IR on Monday and after Arvid Soderblom was pulled on Monday, looks for Mrazek to the net in Los Angeles.

The LA Kings are still searching for consistency in their game, but two of the last three have been what we’re used to seeing. That includes a 2-1 overtime loss to these Blackhawks in Chicago a week ago. LA dominated that game from a possession standpoint, owning 63% of the CF% and 67% of xGF% at 5-on-5.

After Tuesday’s shutout against Minnesota, the Kings’ goaltending has finally hit the .900 mark in 5-on-5 save percentage for the season. If the goaltending can settle down, that’ll go a long way to finding that consistency in their play.

Chicago is coming off a brutal special teams performance against Winnipeg. Their power play went 0-3 and allowed a short-handed goal on top of it. Meanwhile, the Jets went 3-4 against Chicago’s penalty kill. It wasn’t pretty.

Frustration is starting to set in for the LA Kings’ power play. They went 0-4 against Minnesota, including a 5-minute major power play. LA has fallen to 26th in the NHL at just 18.5%.

The penalty kill has been a lot better for the Kings, but it’s also been nice that they haven’t taken many penalties of late. In their last three games, LA has allowed just one power play opportunity to Chicago, two to Florida, and just one to Minnesota – killing all of them off. They sit in 20th place in the NHL at 77.2%.

*Note: the odds below are for sports books offered in New York. Refer to available sports books specific to your state.
**Odds as of 8:30 am ET/5:30 am PT and may have changed since this has been published.

Not surprisingly, the Kings come in as heavy favorites in this one. The best number available is -250 at BetRivers. If you like Chicago coming off four days off, DraftKings has them at +225. The total on the game is 6.5, with a few books offering -120 on the Over. BetRivers’ +105 is your play if you like the Under.

Gabriel Vilardi continues to be one of the best stories in the NHL this season. He’s tied for third in the NHL in goals and is +170 to score on Thursday. Drew Doughty leads Kings’ defensemen in points and is instrumental in the team’s offense. He is -135 to record a point tonight.

It’s hard to bet on the LA Kings’ power play right now, but against a shaky penalty kill in Chicago, Vilardi (+255) and Doughty (+215) both have long odds to register a point with the man advantage despite being on the top unit.

Former King Andreas Athanasiou picked up a point in the overtime win over LA last week, and he is +120 to do the same tonight. As long as Max Domi is playing on the top line and top power play unit, he isn’t a bad option at +120 to record a point. He currently has seven in 12 games this season.