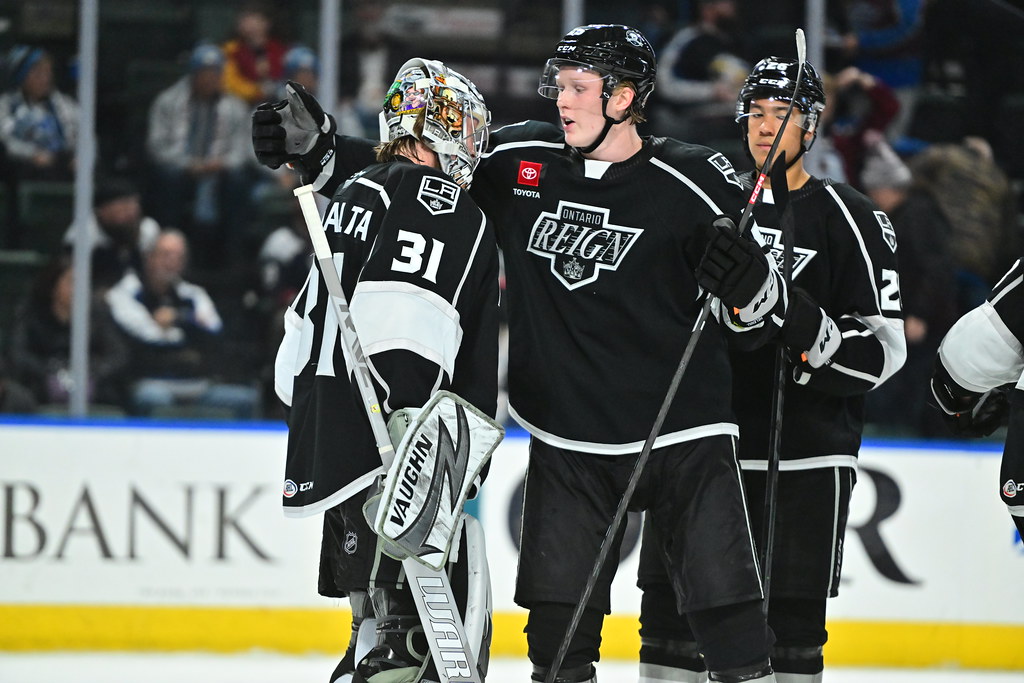 This week, the Ontario Reign played a two-game series in Colorado and walked away with a split. The Reign were outscored 7-5 in the two games.

Jordan Spence continues to build on his rookie campaign from last year. Spence had a solid game in the first meeting against the Eagles, recording a power play assist. Ironically, of the three assists by Spence this week, two of them came on the power play.

While the second game was a bit of a struggle for the Reign, Spence was the second-best Reign player in the first game. With Tobias Bjornfot getting hurt and unable to finish the first game, Spence saw a lot of ice time and looked good defensively. Spence earned the third star of the week honors with his performance in game one.

With Samuel Fagemo out because of an injury, Alan Quine moved up to the first line playing alongside TJ Tynan and Lias Andersson. Those three combined for four of the five Reign goals this past weekend. Andersson recorded three of those goals, with Quine recording the other. Tynan chipped in with four assists as well.

The first line had been quiet the last few games but made their mark this weekend. While Fagemo is out, expect these three to play on the first line together. The trio’s performance earned them the second star of the week.

Matthew Villalta started the first game of the series and looked great. Villalta didn’t allow any goals on the 31 shots he faced earning his second career shutout with the Reign.  The 23-year-old appeared in the second game after Pheonix Copley got pulled for allowing five goals and gave up two of his own in a 7-3 Reign loss.

Villalta has had a solid start to the season and continued that in the first game against the Eagles. The Reign had only one shutout last season, and Villalta accomplished that feat in the 8th game of this season. His shutout alone earned him the first star of the week.