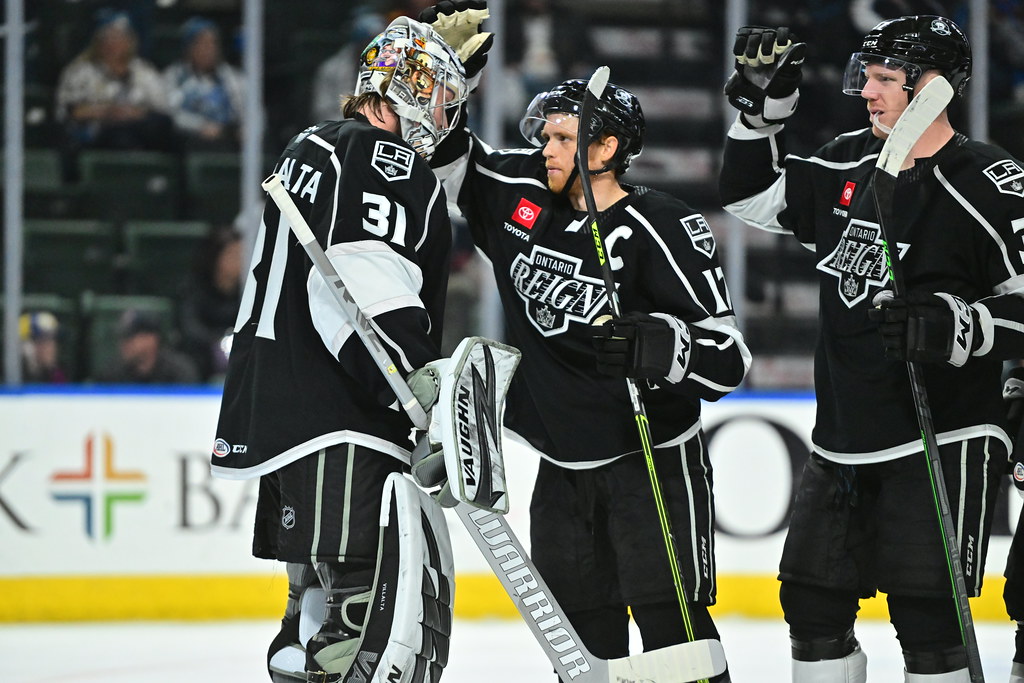 The first 20 minutes provided no score, with the Eagles outshooting the Reign 10-7. However, the second period provided more chances as the Eagles put the pressure on early. At 10:09 of the second period, Shane Bowers got called for interference sending the Reign to the power play. After Jordan Spence’s shot went wide, the puck bounced in front of the net right onto the stick of Lias Andersson, who put the puck into the open net, giving the Ontario Reign a 1-0 lead.

That’s one! Andersson’s second goal came in the dying seconds of the second period. Defenseman Tobie Bisson made a great move at the blue line to escape a defender and made a cross-ice pass to Andersson, who one-timed one by Eagles netminder Jonas Johansson for a 2-0 Reign lead. That would be all the scoring for the game.

Matthew Villalta has played well this season, even though it has only been three games. The last time Villalta started a game in Colorado was game one of the Western Conference Semifinals in the playoffs last year. That start would be a nightmare for Villalta as he allowed seven goals and got pulled late in the second period in a 10-1 loss.

Now let’s fast forward to November 3rd. The result for Villalta would be much different than that game one start. The 23-year-old would get some redemption by stopping all 31 shots he faced, recording his second career shutout. The shutout improved Villalta’s record to 3-0-0 in the young season.

Matt Villalta earns the second shutout of his pro career and Lias Andersson scored twice to get a road victory in Loveland.

The Reign improve to 7-1-0 on the season through 8 games.

That is six straight wins for the Reign train now. During this six-game win streak, they’re playing like a complete team. They’re getting contributions up and down the lineup, better team defense, and great goaltending on a nightly basis. Also, the penalty kill is now top five in the AHL. They aren’t just winning high-scoring games like they were last year. They’re winning in low-scoring games as well.

Entering the season, the big question mark for the Reign was their defense and goaltending. So far, they have answered those questions. The goaltending has been solid, and the Reign don’t have to rely on scoring four or five times a night. Playing in these tight games can help them going forward as they look to make a deep playoff push.

UP NEXT: These two teams are back at it again on Saturday. The puck drops at 6:05 PM PT in Loveland, Colorado.