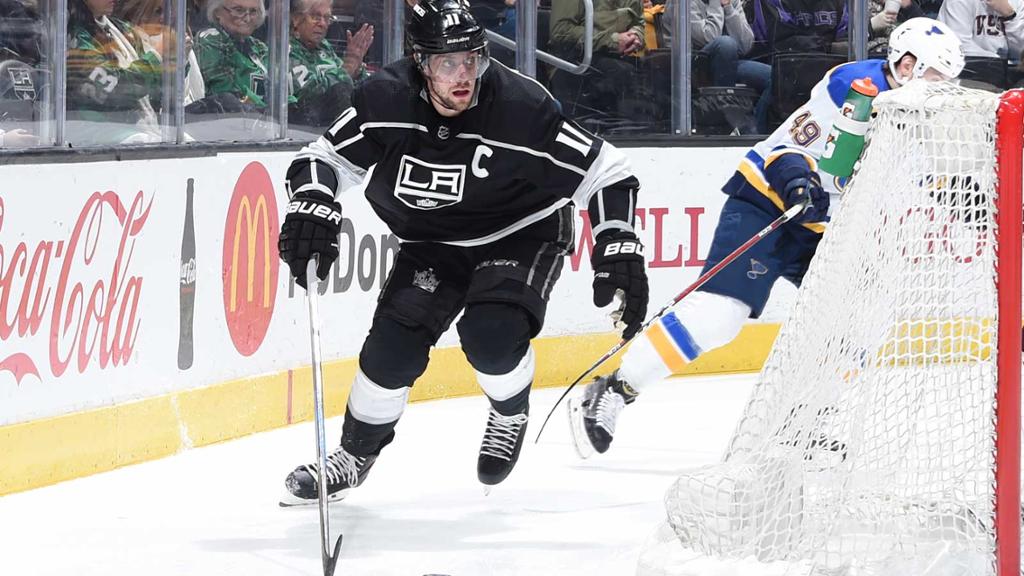 After a 2-1 three-game homestand, the LA Kings hit the road for three. The first of which is on Monday in St. Louis.

The Kings made some changes to their lineup heading into their game on Saturday against Toronto, and things went well, beating the Leafs 4-2. I wouldn’t expect any significant changes, though; one we might see is Quinton Byfield draw back into the lineup. He’s missed the last two games due to an illness. Rasmus Kupari took his spot in the middle of the third line; if Byfield does return, I won’t rule out Kupari being an option on the wing on either the third or fourth line.

Brandt Clarke was a somewhat surprising scratch on Saturday. He has played eight games so far this season and can play just one more before the team has to decide whether he’s staying in the NHL or going back to the OHL. I have to believe his place is fairly secure, and he draws back in on Monday.

Calvin Petersen put together one of the better goaltending performances of the season on Saturday, stopping 26 of 28 Maple Leaf shots. The Kings play on Monday and again on Tuesday (in Dallas), so both goalies will most likely be called upon. We’ll go with Petersen on Monday to follow up on his solid performance.

Currently on an “unacceptable” four-game losing streak, the Blues will look to get right against the Kings.

Former LA Kings’ draft pick Brayden Schenn is tied with Justin Faulk with nine points, the most on the team. St. Louis is not getting production from some key players early on this season. Ryan O’Reilly (one point) and Jordan Kyrou (three points) have struggled to get going. The team is averaging just 2.33 goals per game so far this season.

Jordan Binnington projects to get the nod in net on Monday, but he’s coming off an ugly six-goal-against performance on just 24 shots against Montreal on Saturday. He is 3-2 with a 2.60 goals-against average with a .903 save percentage on the season.

This is probably one of the few times we can say this so far this season, but the Kings come into this the better team, at least in terms of early-season performance. The Blues have struggled in possession at 5-on-5 and have come out on the wrong side of things in the scoring chance statistics as well.

Both of these teams are in the bottom ten in 5-on-5 save percentage (per Natural Stat Trick), with the Kings coming in as the fifth-worst (.886) and the Blues ninth from the bottom (.903).

The power play has been one of the few bright spots for St. Louis. Their 29.4% (5-for-17) is good for fourth in the NHL. Los Angeles scored two power play goals on Saturday, and things do seem to be improving with the man advantage. They still sit in the lower part of the league, though, at 19.2%.

St. Louis also has a better penalty kill in the first few weeks of the season, killing 81.3% (14th in the NHL) of opponent’s chances. The Kings have given up power play goals in back-to-back games and sit in 19th place at 77.8%.

The Kings come in as underdogs, with BetRivers offering +105. The Blues are -120 at Caesars, and that’s the best price if you like the home team. I like the Kings as dogs tonight because of the way St. Louis is playing, though last night, LA’s +125 looked much more attractive.

The total on this game is six. If you like the Over, a few books are offering +100. If you prefer the Under, BetRivers has you at -114.

Gabriel Vilardi continues his hot start to the 2022-23 season. He moved up to the top line on Saturday and extended his goal streak to three games. He is +285 to score in St. Louis on Monday. He’s also +310 to record a power play point, playing on the top unit.

Kevin Fiala broke a six-game goal drought against Toronto, scoring his second goal of the young season. He was moved down to the third line but remained on the top power play unit. Despite that being only his second goal, the first-year King does have nine points on the season, so he is finding the scoresheet. He is +170 to score and -185 to record a point.

If the Blues are going to turn things around, Ryan O’Reilly is going to have to get going. He is +285 to score tonight and -110 to record a point.