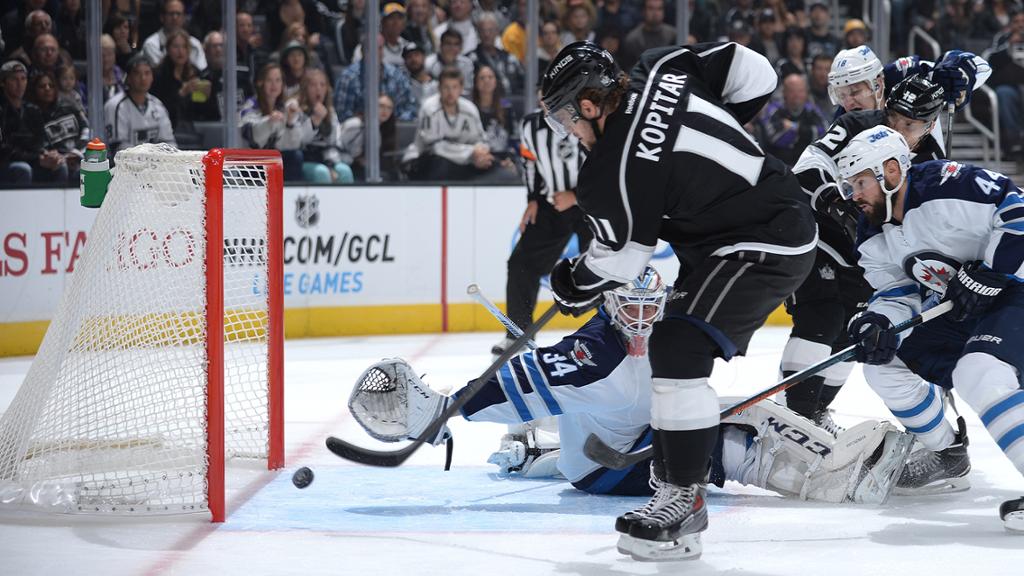 The LA Kings will look to make it two in a row when they welcome the Central Division’s Winnipeg Jets to town on Tuesday night.

Viktor Arvidsson was a late scratch on Tuesday and did not skate during Wednesday’s practice. Gabriel Vilardi looked great, to say the least, filling in for Arvidsson alongside Trevor Moore and Phillip Danault. If Arvidsson is out (or perhaps, even if he’s in) I’d expect Vilardi to stick with those two – the line looked that good.

Jaret Anderson-Dolan made his season debut on the third line with Quinton Byfield and Arthur Kaliyev, and he played as we’d expect JAD to play. He was in on forechecks and played a hard, fast game. If Arvidsson is out, he’ll be in again.

Since Alexander Edler has been healthy, we’ve seen a pretty consistent defense group. Coming off arguably their best defensive performance of the season should be a safe bet we see the same six.

Jonathan Quick will want the second goal against the Lightning back but was overall strong on Tuesday. Expect Todd McLellan to send him back out.

Here’s how Winnipeg skated on Wednesday:

No Logan Stanley or Nikolaj Ehlers.

Nikolaj Ehlers will travel with the team but is not expected to play due to a lower-body injury. Logan Stanley also missed practice after blocking a shot on Monday.

One of the league’s best netminders, Connor Hellebuyck, is 3-2 with a 2.20 goals-against average and a .929 save percentage to go along with one shutout.

The Jets are not playing quite the same high-scoring games that the Kings are these days. They have not been a great possession team in recent years, and that’s continued in the early going of 2022-23. What helps Winnipeg is having Hellebuyck between the pipes to keep games close.

Los Angeles dominated Tuesday night’s game against Tampa Bay, controlling over 60% of CF% and xGF% at 5-on-5. If they’re able to bring that again on Thursday, they’ll have a great opportunity to win two straight.

The LA Kings are favorites again with BetRivers (-139) offering the best odds. FanDuel’s +126 has your best number on the underdog. With a total of six, goals could be tough to come by if the Kings have found their structure again and Hellebuyck in the crease for Winnipeg. BetRivers offers the best number on the Over at -112 while a WynnBet and BetMGM have the Under at Even money.

Are we really still going to keep riding the Gabriel Vilardi train? Why yes, yes we are. His start has solidified him a spot on the top power play unit and is now playing alongside Phillip Danault and Trevor Moore on the second line. He is +260 to score again tonight.

Adrian Kempe is averaging just under five shot attempts per game, he is -155 to record over 2.5 shots on goal.

Danault’s second line has been much better in recent games whether it’s been Arvidsson or Vilardi on his right wing. With the start Vilardi is having, Danault being +195 to record an assist is intriguing.

The LA Kings are still one of the most penalized teams in the league. Though their penalty kill is improving, they’re giving their opponents too many opportunities. Pierre-Luc Dubois (+255) and Blake Wheeler (+340) are both on the top unit and should have a handful of opportunities to register a power play point tonight.