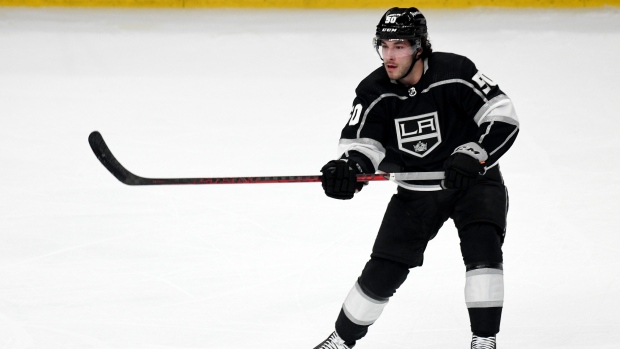 We’ve known since the end 2021-22 season press conference that the LA Kings would be playing a right-shot defenseman on the left side. General Manager Rob Blake said as much. It’s been talked about ad nauseum how the Kings are in need of a left-shot defenseman, including by yours truly. And, of course, there was a recent game in which the Kings played five right-shot defensemen in a game.

But what I don’t think has been talked about enough is why this is a big deal. Here, I’ll try to illustrate some examples of what issues a player can face when playing his off-side. For this, I’ve taken some examples of Sean Durzi from the last two Kings games in Washington and Pittsburgh.

I’d like to note – this is by no means a slight on Durzi. In fact, I think he’s played the off-side about as well as you can. He is a highly-skilled, highly talented player with good hands and good feet, which allows him to adjust to many situations easier than others. That said, he has been the right-shot defenseman tasked with playing the left side the most, and he’s not immune to some of the inevitable situations a player in this role will find themselves in.

While most of these point out the problems a player playing his off-side will encounter, there are some positives in the offensive zone that we see here.

All videos courtesy of InStat

First, his goal against Washington:

By starting his cut from the left side, it allows him to get into the slot on his forehand.

Similarly, this video shows two instances where he’s able to open himself up into a shooting position by being on his left side:

But again, there are issues that come up that a player playing on his off-side normally would not have to deal with.

For this next clip, we’ll stay in the offensive zone. There are two plays on this one shift that happens. First, Durzi is able to corral the puck off the wall, but because he’s on his backhand is forced to stick handle to his forehand. The Washington forward knows this and is able to use that time Durzi is stick handling to get into a shooting lane, forcing Durzi back down the wall. In the second part, you will see the puck is wrapped along the wall. Durzi has to try to use his skate to keep the puck in, as opposed to his stick, which a left-handed shooter would easily be able to do. This leads to a scoring chance the other way.

Next, we’ll shift to the neutral zone.

This clip is a neutral zone regroup. Matt Roy gets the puck, and if his partner were left-handed, he’d likely be more parallel to Roy for an easy D-to-D pass (or at least the option for one). But in order for Durzi to receive this pass on his forehand, you’ll notice he has to be skating toward his own goal. This doesn’t really make him an attractive option for Roy, who chooses another play:

Another neutral zone example here is Durzi is the one retrieving the puck. You’ll notice the two highlighted players, Anze Kopitar and Gabriel Vilardi, are open and the easiest outlets to make. However, Durzi is on his backhand, and his back is to them by playing on his off-side. Rather than make a more difficult play on his backhand, he ends up going over to Roy. This may not seem like a big deal, but a quick up to Kopitar or Vilardi offers a far better chance at gaining the offensive blue line with possession than the play he’s forced into:

This next one is even more subtle, but I do think it is worth showing. There’s a 50-50 puck that Durzi and Evgeni Malkin are trying to get to. If Durzi were left-handed, he’d be able to go into this challenge with two hands and pinch Malkin off at the boards. He’d be able to go in much more aggressively. But with it being on his backhand, he instead has to reach into the puck battle and either Malkin wins it and gets a scoring chance, or Durzi will end up taking a penalty on the play:

Lastly, an example of a breakout. The Kings love to use Kopitar as an outlet through the middle on their breakout. Here, Durzi simply can’t make the play, he’s on his backhand and his back to Kopitar. If he was left-handed, this is a relatively easy play to Kopitar in stride to exit the zone.

Many of these are subtle, however, in a game that is as fast as the NHL is today, every second or even half-second matters. I reiterate that Durzi is the best right-handed option to play the left side for the LA Kings, and in reviewing the video, he makes several plays that I wouldn’t have expected. That speaks to his skill level. But I did want to illustrate some of the reasons why playing on your strong side as a defenseman is important and why I still believe it’s a position the Kings need to address.