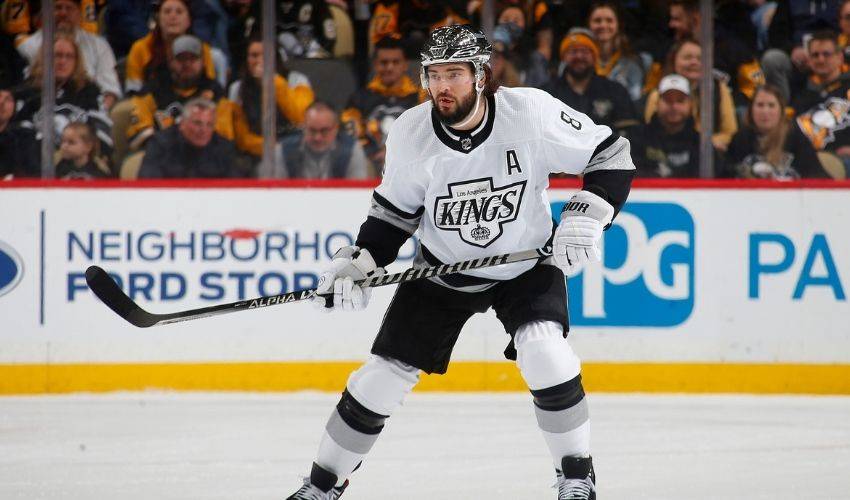 The 2022-23 LA Kings season is finally upon us! It has been a long off-season, but optimism is high in Southern California.

One way to take advantage of this optimism is in the world of sports betting. Currently legal in 27 states (and Washington D.C.), this is slowly but surely coming to a state near you if it hasn’t already.

Before we take a look at the LA Kings’ opening night matchup against the Vegas Golden Knights, we’ll first get the latest odds on the Kings to win the Pacific Division (courtesy of our sponsor, Draft Kings. Promo Code: THPN)

Los Angeles has the fourth-best odds to win the Division, behind the Calgary Flames, Edmonton Oilers, and Vegas Golden Knights. At +500, the Kings have an implied probability of 16.67% to win the Pacific. If you think the chances are better than 17%, +500 might sound like a good bet to you.

Next up, the Stanley Cup:

The Kings come in 14th here at +3500. Ahead of a couple of notable teams in the Central Division in Nashville and St. Louis, the Kings are shown a little love there. That +3500 is an implied probability of 2.78%.

Now, on to opening night.

For this, we won’t just look at one sportsbook but multiple. If you are operating in a state with regulated sports betting, you will have the luxury of shopping multiple books for the best price. Think about it, if two gas stations operating on opposite sides of the street offer the same product, but one is 15 cents cheaper, wouldn’t you choose the cheaper one? Of course, you would.

The best way to do that in the sports betting world is by using BetStamp. This allows you to view every sports book’s odds all in one place. One-stop-shopping, if you will, to allow you to get the best number available to you.

*Note: the odds below are for sports books offered in New York. Refer to available sports books specific to your state.
**Odds as of 8 am ET/5 am PT and may have changed since this has been published

If you are interested in betting on the Kings, the best price is at FanDuel at -113 (53.05% implied probability). Saving a few cents on a line may not seem like much here and there, but over the course of a season, those savings add up.

And if you’re more interested in throwing a few bucks at an underdog, Vegas is +105 (48.78% implied probability) at WynnBet. You’ll notice that’s as much as 10 cents better compared to the market.

The total for this game is set at six. The Over is Even money at a few books. If you have the stomach for the Under, FanDuel’s -114 is the way to go there.

With this being the opening night of the season, there’s virtually no data to consider in terms of how the teams have played to date. In their five preseason games, LA’s 55.3 CF% was third-best in the NHL, while their 55.3 xGF% was fifth-best. Vegas’ 49.9 CF% was good for 17th in the preseason (also five games), and their 44.8 xGF% ranked 25th.

No, I wouldn’t put much stock into those five preseason games with varying lineups.

As far as individual player props, newcomer Kevin Fiala is +235 (Caesars) to score a goal in his LA Kings debut, while Drew Doughty, playing in his first game after having his season cut short in 2021-22, is +125 (BetRivers) to record three shots on goal (Over 2.5).

Cheers to a successful opening night, and good luck!