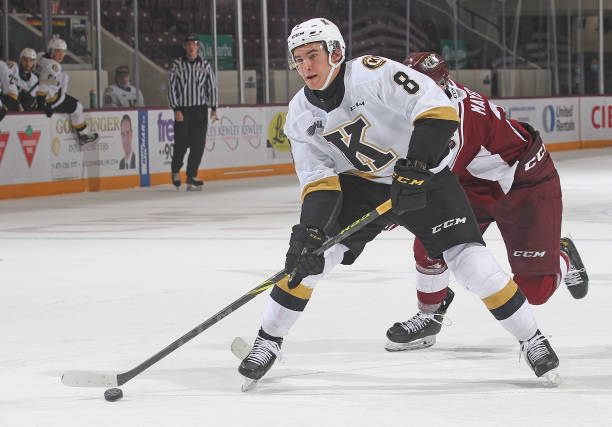 With training camp beginning today, we are continuing our preview of each player on the LA Kings roster. Up next: Martin Chromiak!

While the OHL didn’t have a 2020-2021 season due to COVID-19, Chromiak spent the season in Slovakia with the HK Dukla Trencin and two games with the Ontario Reign. With the OHL returning to play for the 2021-2022 season, Chromiak returned to the OHL for his second season with the Kingston Frontenacs. His numbers would skyrocket as he spent most of the season on the same line with the 4th overall pick in the 2022 draft, Shane Wright.

In 60 games, Chromiak recorded 44 goals, 42 assists, and 86 points. His 86 points were 4th best on the Frontenacs. In 11 playoff games, he recorded seven goals and five assists for 12 points. A spectacular season as it was his last one in the OHL.

Since Chromiak is 20 years old, he will not be in the OHL this season. It will either be the NHL with the LA Kings or the AHL with the Ontario Reign. With Martin Frk departing fir the St. Louis Blues this summer, there is an opening on both the top powerplay unit and first line. Chromiak doesn’t have that 109 MPH slap shot Frk has, but it is lethal to fill the void on the first powerplay unit. If he doesn’t slot in on the first powerplay unit, he should see time on the second. That shot of his can’t go to waste.

I wouldn’t be surprised if he starts the season on the top line, as he and TJ Tynan would be perfect together. However, Samuel Fagemo may get the nod over him. Nevertheless, Chromiak should see time as a top-six forward and can move up to the first line if needed. It should be a fun first professional season for the 20-year-old. He’ll bring offense to a Reign team that has no problem putting the puck in the net.