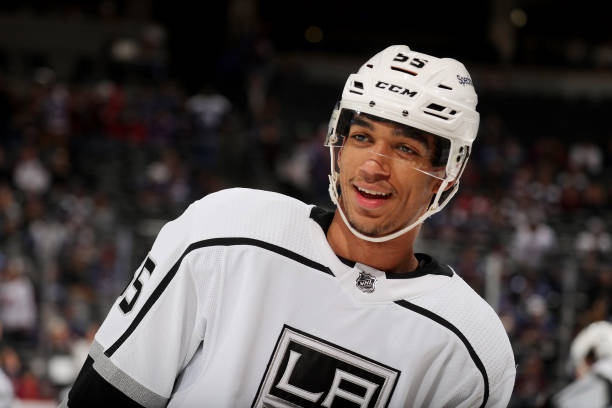 With training camp right around the corner, we are previewing each player on the LA Kings roster. Up next: Quinton Byfield!

Byfield was on track to make the opening night roster until a fractured ankle in a preseason game against the Arizona Coyotes kept him out of action for two months. After working his way back, the Kings sent Byfield down to Ontario for a conditioning stint with the Reign.

In 11 games with Ontario, Byfield posted four goals, two assists, and six points. On January 20th, Byfield made his season debut against the Colorado Avalanche where he didn’t register a point but had a couple of good chances while logging 15 minutes of ice time. His first goal came in his fourth game of the year against the New York Islanders in a 3-2 Kings victory.

Tossing it back to Quinton Byfield's (@byfield55) first goal in the League– a high glove-side laser. 🎯 pic.twitter.com/HdhzUuzhju

For the season, Byfield registered ten points in 40 games. In two playoff games, he registered zero points as he became a healthy scratch in the final five games. He showed glimpses of promise at times especially his three point performance against the Nashville Predators on March 22nd.

This year is about taking the next step for Byfield. Drafted number two overall by the LA Kings in 2020, it’ll be important for him to start showing some progress. At age 20, he is projected to be the Kings’ third-line center, but he’ll have to start earning the coaching staff’s trust and get more ice time. He’ll have to be better in the faceoff dot as well as he was 45.4% in 40 games last year.

A do-or-die season for Byfield? No, but it will be time to see some progress. Asking for 100 points isn’t going to happen right away. Remember he is still only 20. Don’t just give up on him and label him a bust just yet. A full season in the NHL will help his development.