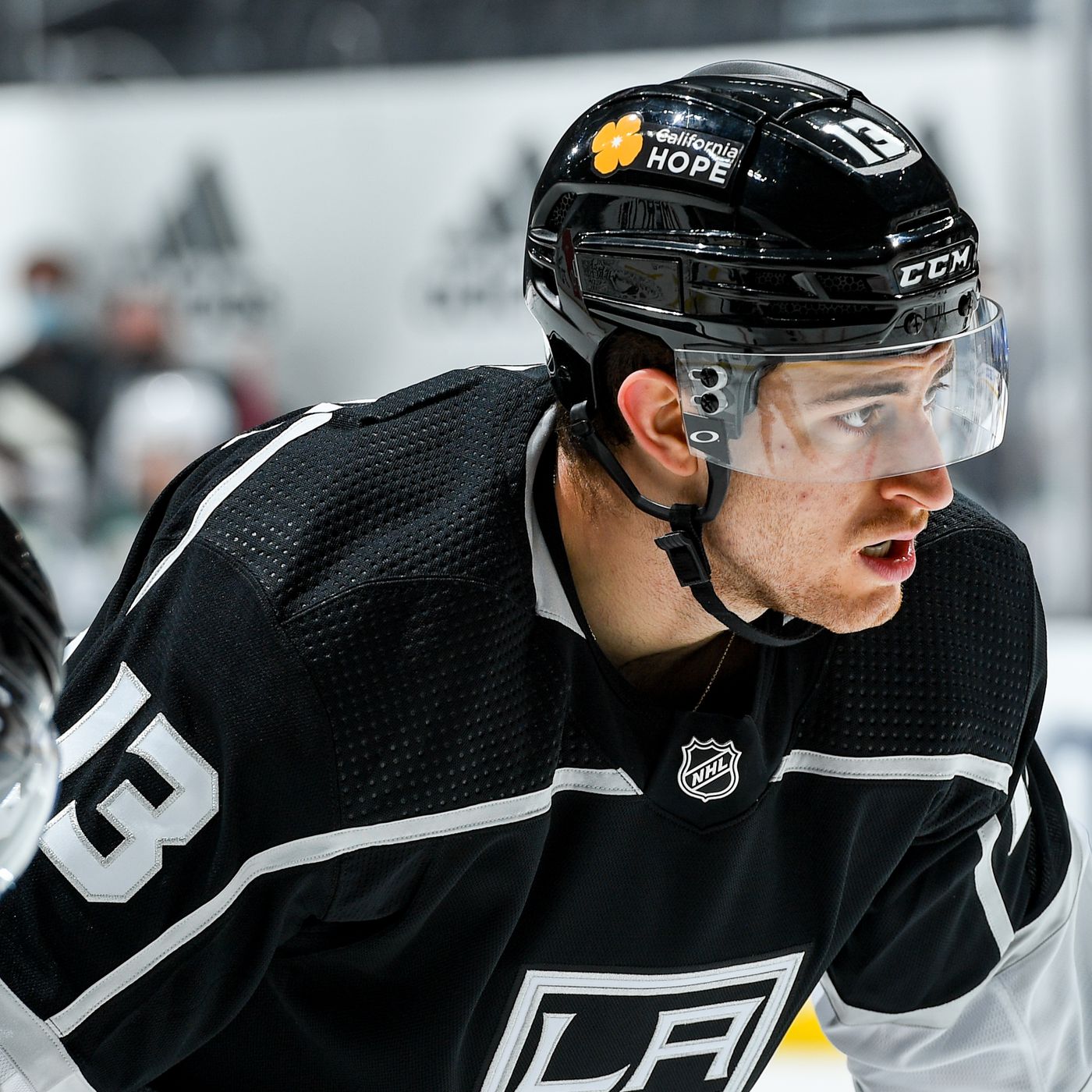 A new jersey ad for the LA Kings

When the NHL announced that teams would have to wear advertisements on their jerseys starting before the 2022-23 season, fans reacted with mixed emotions. Some understood the concept of the ads would help the NHL increase its funds so that the salary cap would also increase, and others weren’t so pleased with the news, including fans of the LA Kings. Some are even afraid the NHL would keep piling on advertisements on jerseys until they look like European hockey tarps.

A few NHL teams have already chosen their sponsors for this season, as seen in the tweet below:

We have no idea as to what company will be represented by the Kings this upcoming season, but we do have a handful of guesses as to who will have its logo engraved on the black and silver jerseys the LA Kings have won two Stanley Cups in.

Probably the most likely outcome, Spectrum was the company the LA Kings had on their helmets in the 2021-22 season. Spectrum has been a sponsor for LA for a few years now, and since the Kings agreed to represent them last season, it’s hard to doubt both sides want to continue their partnership.

With the Kings becoming a much better team this year, Spectrum would like to take it to a next level by putting their logo onto their jerseys rather than the helmets. And since the Kings did do so well last year defying all odds, it’s most likely that both sides will look to continue their looks of last season.

This one is also a very likely outcome, but not as much as Spectrum.

McDonald’s has been on the LA Kings’ practice jerseys for countless years, dating back to the early Reebok era. Visually, this one looks the cleanest and the most natural because fans have been so used to the Mcdonald’s logo being on the practice jerseys, this one will definitely feel the most comforting out of all the options.

Since we’ve seen this before, the blow will be softened. Plus, the logo does happen to be fairly smaller and much slimmer than what we’ve seen, so it’ll likely be way harder to notice when the players are out on the ice. While the yellow does look a little strange, it doesn’t look all that bad. If the Kings do end up going this route, it could turn out to be the most iconic logo placed on an NHL jersey this year.

Crypto.com bought the naming rights to the current home arena of the LA Kings, the LA Lakers, and the LA Clippers. They purchased it last year in 2021 and took over the notorious and legendary name of STAPLES Center, and the arena underwent a few changes.

As of today, the entire arena has been remodeled to match the Crypto.com colors and designs, and it’s even gone through remodels to make the arena much more refurbished and look much more modern. Some of these additions include new screens and new areas in the arena for entertainment.

It’s hard to believe that the two sides are finished. Whether it’s more partnerships with NFTs or even more changes within the arena, it’s likely that the LA Kings and Crypto.com are just getting started. One of those changes could be an advertisement on the jersey.

People will be critical of the decision to continue to support cryptocurrency following the huge crash a few months ago (and its obvious instability), but the colors fit really well. The dark blue matches the black, and the white looks identical to the silver and white that the Kings have on the sleeves.

It’s probably the most controversial and it’ll receive its fair share of criticism, but in the end, it’ll look the cleanest out of any NHL team if it were to happen.

Personally, this would be my favorite option. If you can recall, the LA Kings had CalHope as their helmet sponsor in the 2020-21 NHL season. It was probably the coolest, too.

California Hope is a company that helps out families and people that have been negatively affected by Covid-19. It’s also a support line that anyone in California can reach out to deal with trauma and other issues that negatively affect them. The wonderful people working at CalHope are able to help people in mental and physical need, and it’s an amazing initiative with a great cause.

Unfortunately, CalHope doesn’t have a high enough income to afford a spot on the LA Kings jersey for this season, but we can only hope. The cause makes it worth it alone, and having a sponsor like that makes it a really heartwarming and helpful option.

While it is unlikely, the fact that they were on the helmets in 2020-21 makes jersey advertisement a possibility. This is the logo I’m most hopeful for because the impact it could make would seriously help out Californians.

Toyota Sports Center is a training facility located in El Segundo near the Los Angeles area. There, the LA Kings host countless tournaments, minor league games, all their practices, and other training centers such as a gym and multiple rinks. Rob Blake and the rest of the management staff have offices there, as well. Toyota has sponsored the LA Kings countlessly in things associated with hockey. fundraisers, and other fun events too.

The fact that the practice facility’s name has Toyota in it, it’ll be hard to imagine Toyota not trying to grow its revenue by trying to get their logo onto the LA Kings’ jersey. This is much more of a real possibility than CalHope, but when Toyota didn’t get the naming rights for the main arena, it made it seem like maybe they weren’t as invested in a massive brand deal.

That being said, the possibility isn’t off the table completely. The chances that Toyota does start bidding to have their well-known logo on the jerseys are pretty high, and they will be a legitimate contender to be represented by the LA Kings.

There’s not a chance in the world that In-N-Out actually does become the company that has their logo stitched onto the Kings jerseys this year, but how cool is the thought of that?

In-N-Out is a massive staple in California and it’s beloved by anyone and everyone. When people visit any part of the west coast, their first stop is usually In-N-Out. They really do love those notorious burgers. Even though the LA Kings have never done anything in partnership with them, the idea of the iconic logo being on the historic LA jersey is such a cool thought.

Going this route, the Kings will be seen as one of the more entertaining teams in the league and they’ll inevitably look super creative. While we know that it won’t happen, it’s still a really entertaining idea that could really boost the appreciation of the LA Kings around the NHL.

The Kings may not even have an advertisement on their jersey for as much as we know, but the likelihood of it happening feels real. Even though it sucks that NHL jerseys won’t look as authentic as they always have, it does help the salary cap go up and help teams like the LA Kings afford better players.

And while we have no idea what company will have their logo on the Kings’ jersey, it’s always fun to play around with photoshop and see which ones look the coolest and which ones make the most sense.