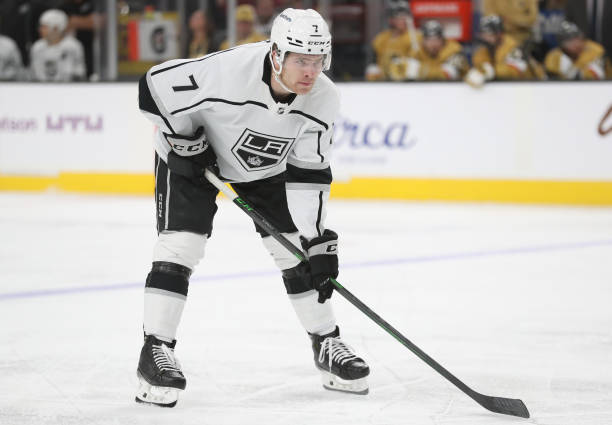 With training camp right around the corner, we are previewing each player on the LA Kings roster. Up next: Tobias Bjfornfot!

The 2021-2022 campaign marked Bjornfot’s first full season and third season in the NHL. The 6-foot blueliner was penciled in the opening night lineup on the second defense pair with Matt Roy. Bjornfot saw a lot of time on both the second and third defense pairs, with Roy, Mikey Anderson, and Sean Durzi serving as his main partners throughout the year.

The Swedish native’s final stat line for 2021-2022 would be eight points (all assists) and a -12 rating in 70 games. There were plenty of stretches, especially in the second half, where he still made rookie mistakes. Toward the end of the regular season, Bjornfot became a healthy scratch and would not suit up in any of the Kings’ playoff games against Edmonton.

One of the nicest game winners you'll see! pic.twitter.com/KiMHsc5RXr

I don’t believe it’s a guarantee where Bjornfot will play next year. No, I am not talking about him getting traded. I’m talking about the NHL and AHL. On the right side of the defense, the Kings have Drew Doughty, Matt Roy, Sean Durzi (who should sign any minute now), and a returning Sean Walker. On the left side, they have Mikey Anderson (again, he should sign any minute now), Alex Edler, Jacob Moverare, and Bjornfot himself.

That is eight defensemen. Of all of those defensemen, he is the only one still left on his entry-level contract and would not have to clear waivers if sent to the AHL. If both Anderson and Durzi are re-signed, and Walker is still on the roster, then I would expect Bjornfot to start the season with the Ontario Reign instead of the LA Kings (I believe it should happen anyway).

However, Bjornfot can still be on the NHL roster, but if he’s going to be a healthy scratch, then it’s best if he starts the 2022-2023 campaign down in Ontario. And it may be a good thing. It’ll give him more time to develop into that second or third-pairing left-handed defenseman the Kings hope he can be.