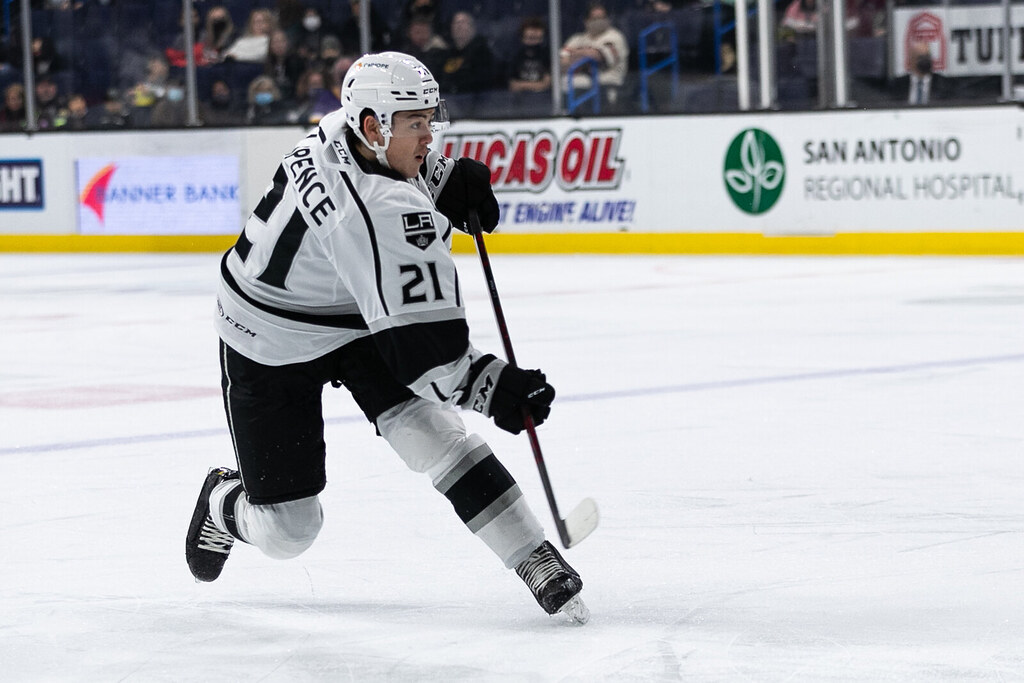 With training camp just around the corner, we are previewing each player on the LA Kings roster. Up next, Jordan Spence!

After spending the previous three seasons in the QMJHL, Jordan Spence turned pro and joined the Ontario Reign for the 2021-2022 season. In his first professional season in Ontario, Spence put up phenomenal numbers. The rookie defenseman scored 42 points in 46 games and had a 13-game point streak from January 2nd to February 4th. Among rookie defensemen, Spence ranked first in both assists (38) and points (42) in the AHL. Overall he ranked third in power-play assists with 24.

His impressive debut did not go unnoticed by the league as he was named to the AHL’s All-Rookie Team.

Spence didn’t start the season on the first power-play unit because fellow defensemen Sean Durzi and Kale Clague would quarterback the first and second units. Once Durzi graduated to the big club and Clague was claimed off waivers by the Montreal Canadiens, Spence was elevated to the first power-play unit and helped lead the Ontario Reign to a 27.5% conversion rate. His vision and passing propelled the Reign to the league’s top power-play and the best in AHL history.

When Kings defenseman Drew Doughty suffered a wrist injury that would eventually require season-ending surgery, LA Kings management didn’t have to look far to find someone to fill a spot on the blue line. Spence would get the call and wound up playing 24 games, registering two goals, six assists, and eight points to end the season for the Kings. He would go on to play in three playoff games as the Kings fell to the Edmonton Oilers in seven games.

Jordan Spence buries one from far for his first NHL goal! 🚨 pic.twitter.com/q1FxfwZYut

There’s no secret that the Kings have a logjam of right-handed defensemen. With Drew Doughty and Sean Walker returning from injury, the Kings still needing to sign Sean Durzi, and Matt Roy still under contract, Spence will start the season in Ontario. Starting the year in Ontario, I expect Spence to be back on the first power-play unit and first defense pair with his old partner Cameron Gaunce. At any point in the season, if the Kings need to find someone to fill in a spot for the defense due to injury, they won’t have to look far down the road.