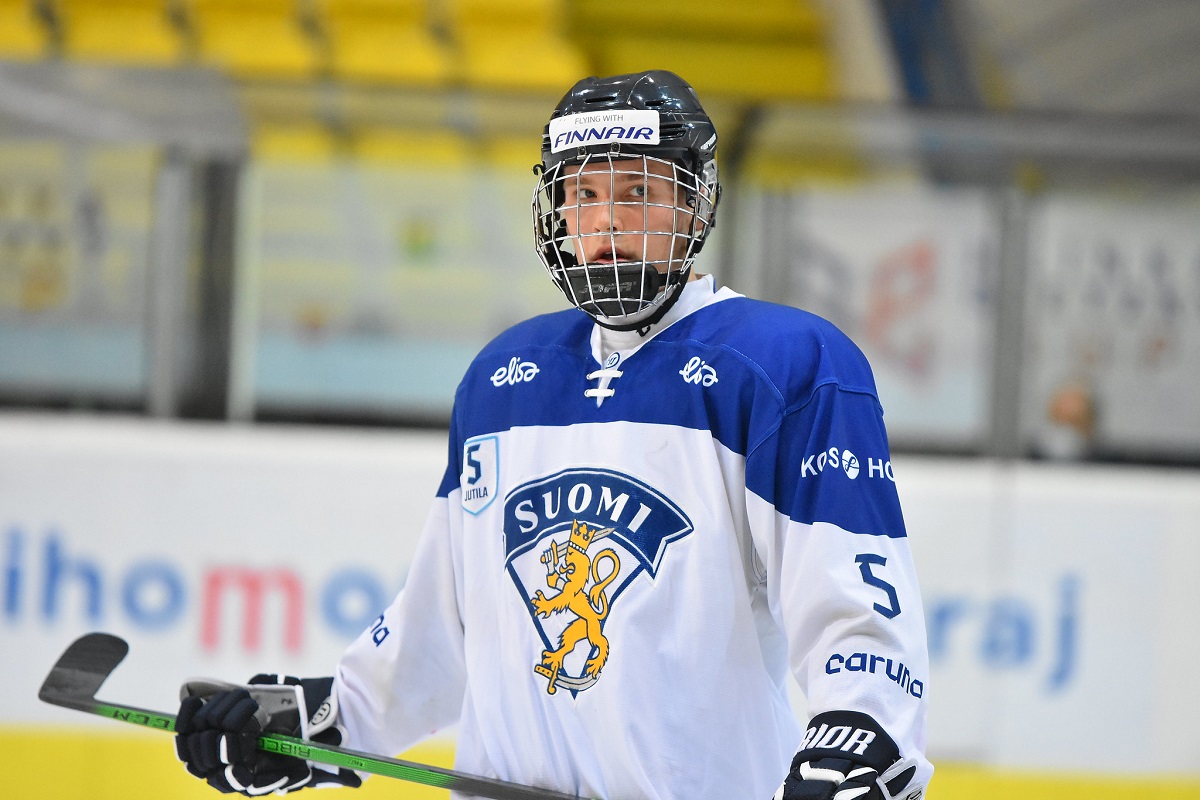 Salin, who appeared in six Liiga games with HIFK this year, was ranked quite highly by many scouts. Some even had Salin going as early as the late second round. Having the LA Kings pick up Salin in the fifth round at pick number 148 is fascinating.

If he’s so good and so many people speak so fondly of him, why did he drop all the way to 148th?

Salin has been a top-line defender in Finland since before the 2021-22 season commenced, and the reason he fell was something that shouldn’t be pinned on him. Otto Salin was injured earlier on in the season after getting a short stint and it took him out of hockey for a little. Now nobody is sure if his Liiga team had chosen to rush him back into action, but following his injury, it felt like he wasn’t the same.

He missed October, November, and half of December due to injury and he was held back in development a lot. It was even reported that he re-activated some of those injuries in games all throughout the season and yet played through all of them. You can’t help but wonder how much earlier Salin would have been selected if he had been given an extra few weeks to properly recover.

His stock fell the most during the infamous IIHF U18 tournament. He had two assists in 4 games and was held scoreless. Scouts and even his team weren’t confident with him and threw the dagger in any hopes of him going in the second and third.

Even though he fell so far into the draft, we have full reason to believe that the LA Kings got a bang for their buck with this selection. Salin is too special of a player to fall to the fifth round, and he somehow presented himself right to the LA Kings which made it an easy choice.

Salin adores joining rushes and being active along the forwards. It’s almost like you’re getting a fourth forward on the ice who’s got defensive attributes. I wouldn’t even describe him as a two-way defenseman and that’s because he plays like a two-way forward rather than a two-way defenseman. That’s the sort of play style Cale Makar possesses, but I would suggest Esa Lindell or Cam Fowler. Maybe even a hint of prime Carl Gunnarsson?

Using points as an evaluation for later-round prospects is definitely a mistake people can make, but I think it’s way too hard to ignore the fact that Salin tallied 4 goals and 12 points in only 11 games with HIFK U20 of the U20 SM-sarja. That’s only 2 fewer goals than notable first overall pick Juraj Slafkovsky had in the same league in the same exact amount of games. He only had 1 point in 6 Liiga matches, but you wouldn’t expect too much from a young defender in a league against men.

With Otto Salin, the LA Kings get a possible defensive scorer in the fifth round. The steal potential is clearly there and if he takes the summer to continue to get better and properly heal up, there’s reason to believe that he’ll bloom into a special player.

Sure, he’s a right-handed defenseman and the Kings already have far too many of those, but the Kings made the right choice by picking the best player available. Passing on a player like Otto Salin, especially in the 5th round, wouldn’t be a wise decision.

Salin’s offensive touch doesn’t only go past his basic play, but it also comes into analytics. Finishing with a higher xESP (expected even-strength points) than players like Miko Mattikka and Kasper Kulonummi isn’t something that’s easy to do, and yet Salin did exactly that. It’s interesting because Salin finished dead center among all Liiga players in xESP. That basically made him the most average xESP player in all of the league, which if you think about it, is quite impressive seeing how he’s only 18.

Salin is heavily trusted with breakouts and setting up plays. We already know that he joins the rush quite a bit, but his zone exits via passes is something that shouldn’t be ignored.

Salin has a unique ability of deception where he finds his teammates in some of the highest pressure situations to get the puck out of his zone. He likes to take his time to make a choice, but you’ll never be upset with the choices he makes. Generating plays and finding ways to get the puck out of his own zone is something Otto’s perfected, and there’s no doubting that it’ll transition into the NHL if (and possibly when) he makes it.

Despite only being 5’11, Salin weighs in at 205 pounds. A super well-built kid, Salin’s been using that weight to his advantage. He loves throwing his body around and making heavy-hitting plays to retrieve pucks in the neutral and defensive zone. It’s almost like opponents don’t expect such a small guy to be so physical and so aggressive.

He doesn’t play like an annoying player though, he doesn’t get under the skin. He just stands players up and plays responsibly when he hits. You watch him play and you understand that he’s all business on the ice. He’s not the one to be taking dumb penalties or the one to talk too much trash. A very respectable player, Salon’s made a stamp for himself as the ideal hockey player that doesn’t get involved in the commotion of emotions.

He does take a few penalties that can be avoided such as trips and hooks, and it can cost the team. Although a generally smart and well-understood player when it comes to basic hockey knowledge, he needs to learn how to make plays that are clean. There’s nothing wrong with defending players using body contact, but there does need to be a little bit more consideration when playing defense disciplined.

Salin is an average skater who doesn’t have that extra explosiveness but he knows how to move his legs quick enough to get past players and set his teammates up with passes. His puck handling out-works his feet so that should show that skating does need to be a working block for him in the future.

It’s a bit strange how outside of the offensive zone Salin has perfected the playmaking part of hockey. Breakout passes, escaping from tight situations, and moving the puck up the ice; it’s all something that he’s more than familiar with. But when it comes to offensive hockey he forgets all of that. He stops moving the puck around and his mindset to shooting the puck. You can tell he gets a tad bit selfish when he gets offensive looks.

You can take that however you want, but the way I see it is 50/50. If you’re talking about even-strength play, he has to learn how to make that extra pass or how to set up his teammates rather than firing the puck at the net. To be honest, he’s got a good shot but it lacks accuracy. If he wants to keep shooting at the net like he does now, he has to find a way to hit the net far more often or even get it into positions where teammates can bang in a rebound. If that won’t happen, he should lay off the shooting a bit more at even strength.

Now for the good part of his shooting: the powerplay. That type of shooter’s mentality goes well on the quarterback position on the powerplay. Having a defenseman that can rotate around the ice and fire pucks at the goalie through traffic is big. Oh the powerplay he’s got that extra time and space which will give him more visibility when shooting. If he does want to pass it and cycle it more around on the powerplay, playing him on it will relieve him of extra pressure and give him some more flexibility in that sense.

Positioning and awareness does become an issue for Otto Salin at some points in the defensive zone. Too often he can get intrigued by a play in the corner and he’ll sucker to that area for the puck. If he wants to continue playing on the back end he should staple himself to his check and stay there.

He can also work on his defensive read. Being able to see what happens is a big part of playing hockey defensively, and when you’re being outsmarted by your opponent it can lead to some goals against. Salin needs some assistance on that part of hockey so learning how to become more dependable in those situations would be a huge helping hand to his team and his goaltenders.

Even though injuries slowed him down and his coaches pushed him to come back, Otto Salin is a pretty special player to land at pick 148. Having him ranked 81st, it’s a bit of a shock that he fell twice lower. Even with the injuries and the uncertainty surrounding his play style after the U18s, you’ll realize how special this kid can be when healthy.

A defenseman who hates playing in the defensive zone, Otto’s a lot of fun to watch when in transition. He may not become a high scorer and he’ll have a few blips on the back end, but the upside is visible. A terrific pick, Otto Salin may make a push to be a steal in the 2022 NHL entry draft.