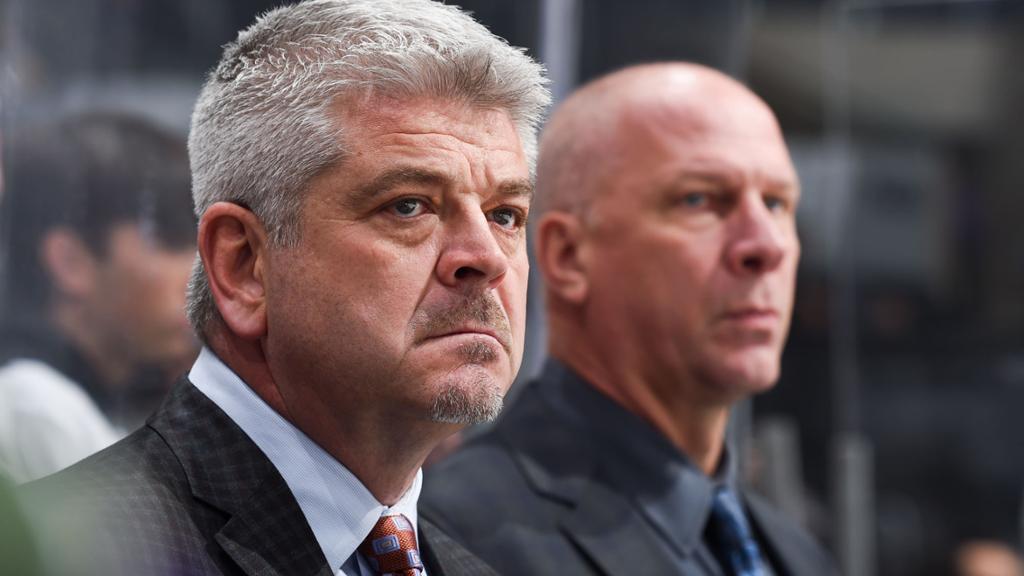 As the LA Kings battle through constant scoring woes and several injuries, they continue to exceed expectations.

We’re approaching the end of the NHL’s regular-season and that means the conversation around awards is starting to heat up.

One member of the LA Kings that should be in consideration for an award isn’t a player, but Head Coach Todd McLellan.

As we sit on April 3rd, the Kings are in second place in the Pacific Division. One point ahead of third-place Edmonton (the Oilers also have a game in hand) and four points up on the Vegas Golden Knights. Perhaps it’d be bold to suggest the Kings are “comfortably” in a playoff position, but I think it’s fair to say if they were to miss at this point, it’d be a disappointment.

With where the Kings are right now, it seems like McLellan should be getting a little more love for the Jack Adams Award as the NHL’s Coach of the Year. Consider this from just a couple of weeks ago. 15 NHL.com writers voted who the favorites at the time were. McLellan was merely a footnote:

In the 10 games since that tweet, the Kings have gone 5-3-2, including an impressive 2-0-1 road trip to Edmonton, Calgary, and Winnipeg. Only now are people starting to take notice:

Coach Of The Year. Not really close. @LAKings pic.twitter.com/insA4F96B1

Following the injury-riddled Kings this week across Edmonton, Calgary & Winnipeg made one thing visibly clear to me… Todd McLellan is the Coach of the Year.

Here, I’ll try to outline some of the reasons that McLellan should be strongly considered.

A quick way to see who could be in the lead for the Jack Adams is to take a look at their starting goaltender’s save percentage. These things tend to be correlated.

Now let’s take a quick check at the save percentages of the respective goaltenders the coaches in the above poll results have:

*At the time of the NHL.com writers’ vote, Cam Talbot was the defacto starting goaltender in Minnesota, before they acquired Marc-Andre Fleury.

Outside of Minnesota, the others are all in the top ten with three of them in the top five.

For comparison sake, here are the ranks for the LA Kings tandem:

Gee, no wonder McLellan didn’t crack the top five. The Kings aren’t where they are on the backstop elite goaltending this season, that’s for sure.

Now, this isn’t to say that any of these coaches don’t deserve of being in the discussion. But if we’re being honest, it helps to have a goaltender that’s keeping pucks out of the net at a high rate.

When it comes to the scoring, by now, we’re all very familiar with the Kings finishing woes. This chart really shines a light on that:

Man if only the kings had montreals finishing.

As we shift away from two things a coach has little control over – a team’s goaltending and their finishing – we’ll now take a look at what he has near direct control over. How his team performs possession-wise at 5-on-5.

As you saw above, they are at the bottom of the league in Goals Scored Above Expected by a significant margin. Something that has plagued the team seemingly for years. However, that same model also has the Kings in the top-10 in Expected Goals For per-60:

The Kings are also a top-five team in CF% at 5-on-5 on the season (per Natural Stat Trick):

Are the LA Kings unlucky?

Perhaps the biggest issue facing the Kings this season is the injury bug. They have had significant injuries to many key players. Drew Doughty missed a month in the fall – and is currently on the shelf again – and they lost Scott Walker for the season around the same time. Alexander Edler and Viktor Arvidsson have only recently returned, the former from a lengthy absence. The team is currently without Brendan Lemieux, Dustin Brown, Andreas Athanasiou, Matt Roy, Tobias Bjornfot, and Mikey Anderson.

Recently, on March 15th, not one defenseman in the Kings’ opening night top six was in the lineup. It looked much more like what we saw in the Ontario Reign’s opening night lineup:

This was the Reign’s Opening Night defensive lineup:

This is the Kings’ projected defensive lineup tonight:

And yet, here we sit. The Kings are in second place in the division. In a position to not just make the playoffs, but host a first-round series.

No, I’m not going to go through this whole piece without mentioning the Special Teams. Of course, let’s be very clear, the Special Teams are not good enough. Both the power-play and penalty-kill units are among the worst in the NHL. I could take the easy way out and blame the assistant coaches as they will generally have a larger share in the Special Teams. But at the end of the day, the head coach oversees all of it.

Some will point to the Special Teams as a reason why McLellan has done a less than satisfactory job. My counter to that is that the head coach has more of an impact on his team’s overall 5-on-5 play. Considering that the Kings have played the third-most minutes of 5-on-5 hockey in the NHL per Natural Stat Trick, I put much more stock into those statistics than Special Teams, which can be not only streaky but of higher variance.

To be second in a division with this poor of Special Teams is a testament to how good this team is at 5-on-5.

Speaking of the playoffs, only three writers among these 16 NHL.com writers predicted the Kings to even make the postseason. None of them picked them to finish second in the division.

The analytical models weren’t any more optimistic. The Athletic’s Dom Luszczysyn had the Kings projected for a 7th place finish in the division:

After Saturday’s win over Winnipeg, the Kings have 86 points with 11 games remaining. (In fairness to Dom, a 90 point season was certainly in the range of outcomes).

It’s always easiest to criticize the coach, particularly when the team slumps. The coach is an easy target. And sure, we all have our own opinions on what the lines should be. I was hoping Arthur Kaliyev would be a top-six forward from the get-go. But as it turns out, he’s a part of a fourth line that has been instrumental to the team’s success.

Two players I hoped to see much more of this season were Vladimir Tkachev and Gabriel Vilardi. I also didn’t think there’d be a consistent role for Trevor Moore. I believed that all he’d be doing is blocking the young kids. But alas, the Thousand Oaks native has been one of the best players on the team in the second half of the season.

We should also remember that McLellan’s job as Head Coach of the LA Kings is to win hockey games. It isn’t to “play the kids” as much as we’d like to see that (though, he’s had no choice lately). Especially when his General Manager made it clear before the season that the expectation was this team will be a playoff contender. McLellan can’t worry about forcing minutes to the young players just because that’s what people want. His job is to win games, and he’s doing it.

After a 1-5-1 start and dealing with the numerous injuries above, McLellan has had to work in an abundance of young players into the lineup, including NHL debuts for Jacob Moverare,  Alex Turcotte, Samuel Fagemo, and Jordan Spence.

Other coaches are deserving of the Jack Adams Award. All I am asking for is that McLellan is given a strong look. Considering the expectations of the LA Kings coming into the season, the injuries they have faced, the good-but-not-great-goaltending, and the abysmal finishing, McLellan still has this team not only in a playoff position but second place in the division.

Todd McLellan is pushing the right buttons. It’s time to start acknowledging that.