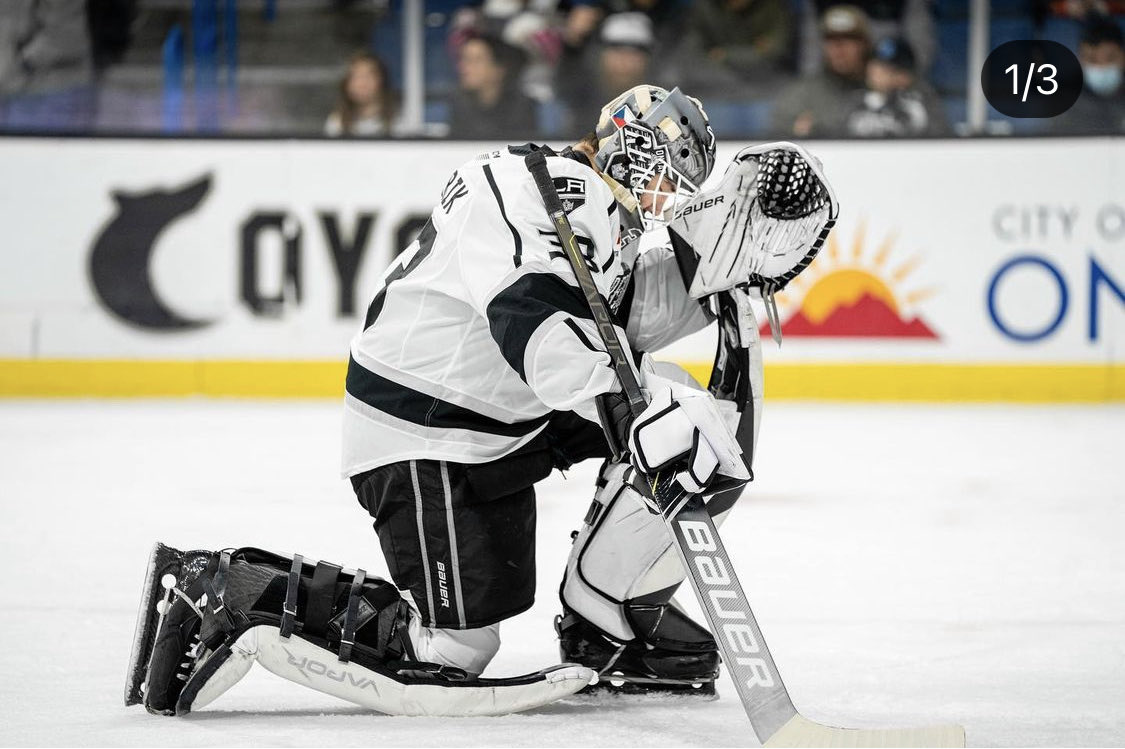 The Ontario Reign welcomes the Grand Rapids Griffins to Toyota Arena on Sunday afternoon, the two teams’ fourth meeting of the season.

After falling 5-1 to the San Diego Gulls on Saturday, the Ontario Reign will meet the Central Division’s Grand Rapids Griffin’s for the fourth time this season. The Reign have won two of the first three, including a 6-2 win last Tuesday.

Here are three things to watch for on Sunday:

1. Parik between the pipes?

Goaltender Lukas Parik was called up to the Reign on Saturday due to an injury to Garret Sparks. The 21-year-old Parik has played four games in Ontario going 3-0-1 with a 3.50 goals-against average and a .893 save percentage. His most recent AHL action came in a January 31st win over San Jose where the Czech allowed five goals on 24 shots.

With the ECHL’s Rapid City Rush, Parik has been strong. He is 13-7-7 with a 2.57 goals-against average and a .920 save percentage, including one shutout.

Given Ontario played on Saturday night and with a busy schedule upcoming, it would seem likely that Parik gets the nod on Sunday.

It has been a trying season for Akil Thomas. His season didn’t get started until December after recovering from double shoulder surgery in the offseason. He would then go pointless in his first 10 games as he was working his way back into form.

Over his next 16 games, he would record just two assists, but we were slowly starting to see him be more assertive with his game. He was also starting to see some power-play time thanks to some call-ups to Los Angeles, it seemed it was only a matter of time before he finally popped one.

That time came on Saturday. On a late first period 5-on-3 power-play, Thomas poked home a rebound in front of the net to pick up his first goal of the season:

The 22-year-old forward had 26 points in 40 games with the Ontario Reign last season. We’ll see if he’s able to put together a hot-streak heading into the playoffs now that he’s netted his first one.

The Reign aren’t the only ones on Sunday who will be playing the second of a back-to-back. Grand Rapids was in Bakersfield on Saturday, beating the Condors 4-3 in overtime.

Victor Brattstrom stopped 30 shots in the win. We’ll see who gets the start on Sunday. The last time the two teams met it was Calvin Pickard, but he was called up to Detroit on Friday.

23-year-old Kaden Fulcher backed up Brattstrom on Saturday and could be in line to get the start. The Brigden, ON native, has played just one AHL game this season, allowing five goals on 26 shots against Milwaukee back in January. In 19 games with the Toledo Walleye of the ECHL, Fulcher is 10-7-0 with a 2.46 goals-against average and .912 save percentage with two shutouts.

The Griffins’ win on Saturday snapped a four-game losing streak.

Puck drop is scheduled for 3 pm PT and can be seen on AHLTV.