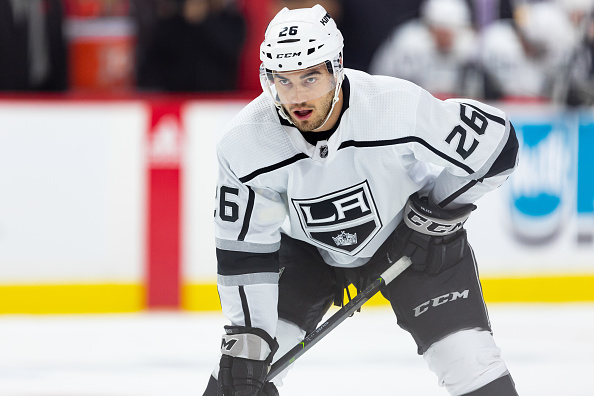 After a season-ending injury, the Kings have seen prospects step in and fill the hole that Sean Walker left. Could his time in LA be over?

When Sean Walker signed a two-year entry-level contract with the LA Kings on July 2nd, 2018, he was seen as the ideal defensive defenseman who could turn into something greater in the NHL. Signing after one season in the AHL, Walker was 24 years old and looking to prove himself after recording 28 points in 64 games.

In his first contract year with Los Angeles, Walker split time between the Kings and in the AHL with the Ontario Reign. The Keswick, Ontario, native had 17 points in 22 AHL games, and 10 points in 39 NHL games. It was fair to say at this point, Walker was a lock to make the Kings roster from there on out.

The following season Walker played 70 games with the Kings, tallying five goals and 24 points. For a free agent signing, Walker had exceeded expectations and it looked like he was finally going to be a full-time NHLer.

On September 11th, 2020, the Kings rewarded Walker by signing him to a four-year extension worth $10.6 million. That would make his AAV $2.65 million. It was a fair deal, even though the term was quite lengthy.

Walker appeared in 47 games with the Kings in 2020-21 and had 18 points. While the point production was there, he actually suffered a tad defensively.

This wasn’t Walker’s best defensive season. Offensively, not only did he put up points, but he also helped create offensive plays and generate net-front opportunities.

As the 2021-22 season rolled around, Walker made the team again (unsurprisingly), and was looking forward to helping the Kings become contenders instead of continuing the rebuild. Six games and two assists into the season, he suffered a horrid injury against the St. Louis Blues.

It was later determined that Walker had suffered a season-ending injury and that he would be forced to have surgery. This made the Kings act upon promptly, and a few days later, Sean Durzi was called up from the Ontario Reign.

At the time, Durzi had 16 points in 13 games with the Reign. Since he wasn’t waiver eligible, the Kings decided to give the 23-year-old prospect a chance in the NHL. Durzi scored a goal and had an assist in his first game. The rest is history.

Durzi has 22 points in 48 games with the Kings this year and has proven himself an NHL-ready offensive defenseman. He’s earned a permanent spot on the NHL roster and it’s doubtful anyone would take that away from him.

This did cause an issue for the Kings. With the truckload of right-handed defensemen in the system, it’s hard to imagine Walker coming back into the lineup next year when healthy. With established veterans Drew Doughty and Matt Roy to go along with Durzi and Jordan Spence looking NHL ready, it seems unlikely that Walker will regain his spot.

It’s hard not to feel bad for Walker, too. He had to work his way up from the NCAA, then to the AHL, and then up to the NHL. When he finally has a good season, it fell apart due to an injury. Now with all the young kids coming in and playing at a rate that was so hard to predict, there’s no more space for a player like Walker on the team anymore.

Of course, you will always have the chance to send down a player like Spence or trade Roy. That still leaves the possibility that Spence outplays Walker by the start of the 2022-23 season. At the moment, that certainly seems likely. It’s also going to be hard to trade away Roy considering just how good he’s been for the Kings recently.

Playing at $1.6 Million dollars above market value, it’s hard to move a player like Roy.

This really only leaves the Kings with one last option, and you guessed it, would be to trade away Walker. You never want to see a player lose his spot due to injury, but this is the reality of sports. It’s a business, and people’s jobs are on the line. Favoritism should not be how GMs run their teams, and in this case, it’s exactly where we stand with Walker.

Although Walker is now a proven NHL defenseman, he’s lost his spot on the roster due to injury. While it’s unfortunate that this may be the end to Walker’s time in LA, the Kings may now be forced to move on from the 27-year-old defenseman. For the sake of roster space, cap room, and the proper growth of the prospects, it’s the right decision.