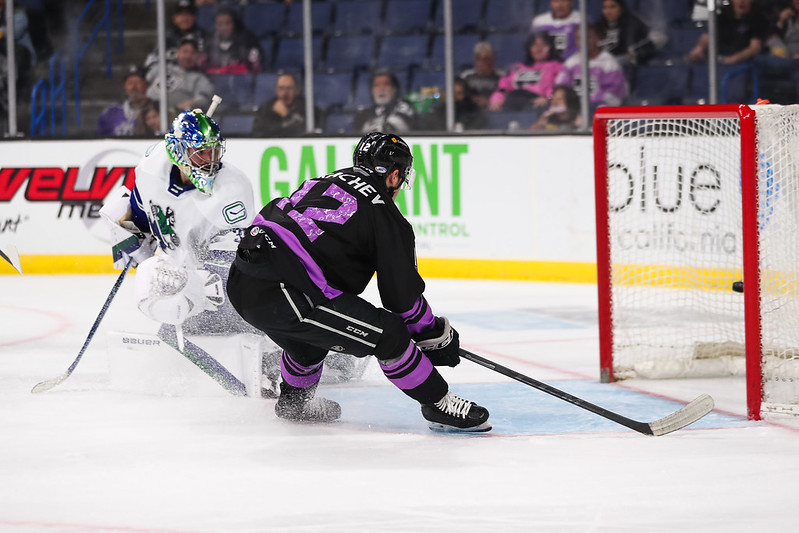 Vladimir Tkachev‘s two first-period goals were the only offense the Ontario Reign could muster in a 4-2 loss to Abbotsford.

1. No playoff spot yet

The Ontario Reign had the opportunity to clinch a playoff spot with a win last night. With their 4-2 loss against Abbotsford, that chance to clinch a playoff spot will be put on hold for another two days. After 20 minutes of play, the Reign had a 2-1 lead but weren’t able to hold onto it and extend it over the next 40 minutes of play. The Reign will have another chance to clinch a spot for the Calder Cup playoffs on Tuesday against the Grand Rapids Griffins.

The Reign welcomed some familiar faces back in the lineup yesterday, both current and old. Martin Frk and Christian Wolanin were both loaned back to the Reign before the game. Frk slotted in on the first line with T.J. Tynan and Aidan Dudas while Wolanin slotted in on the second defense pair. Another old face returned to the lineup last night: that would be Thomas Hickey. Remember him? Thomas Hickey was selected by the Kings with the 4th overall pick in the 2007 draft. Hickey’s last year in the Kings’ organization was back in the 2012-2013 season when the Reign were then known as the Manchester Monarchs.

Even though they lost last night, getting Martin Frk and Christian Wolanin back could provide a big boost going forward for a Reign team that is struggling at the moment. With several players signed to a PTO, it’s great to have some familiarity back in the lineup.

Vladimir Tkachev provided the only scoring for the Reign. His first goal of the game snapped a four-game goalless drought. His second goal of the game gave him his first multi-goal game of the season. Tkachev is normally known for his passing so it was great to see him shoot the puck on his second goal. Samuel Fagemo recorded an assist on each of Tkachev’s two goals and now has 12 points in his last 10 games. It was also Samuel Fagemo’s first multi-assist game of the season. Stay hot Fagemo!

With the loss, the Reign’s three-game losing streak extended to four games now which is their longest of the season. The Reign spent most of the game in their own zone and turned the puck over too much. Give Abbotsford their credit though, they played on their toes and made the Reign play on their heels for most of the game. Acting head coach Chris Hajt admitted in his post-game that the Reign needs to be sharper with the puck. It’s been uncharacteristic for the Reign in their last four games. They’ve had to do some lineup shuffling, the goals have dried up, not much traffic in front of the net, turnovers, and spending a lot of time in their own zone instead of generating offense. Every team goes through one of these spells, unfortunately, the Reign are going through it right now. Time to get back to the basics.

Next up: the Ontario Reign host the Grand Rapids Griffins on Tuesday at 7:00 pm PT. The Reign will have another opportunity to clinch a playoff spot.